An object that appears in a series of recent telescope images will drive a young astronomer and her colleages to a shocking discovery. A new astronomical survey takes wide angle pictures to make a tridimensional cartography of the sky. It will find out position and distances to far galaxies, stars in our Galaxy and objects of the Solar System like minor planets and asteroids. A young astronomer discovers a strange object in a series of pictures from the survey which shows a curious behaviour. And it'll bring unexpected results when reviewed with her colleagues.

A real new astronomy obsevatory built specially for a wide field optical survey of the universe in the Northern hemisphere. A brief overview of how the observatory works and how data is used later by scientists. And, a realistic approach to a First Contact.

For more on the science project, visit: http://www.j-pas.org 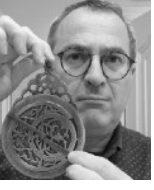