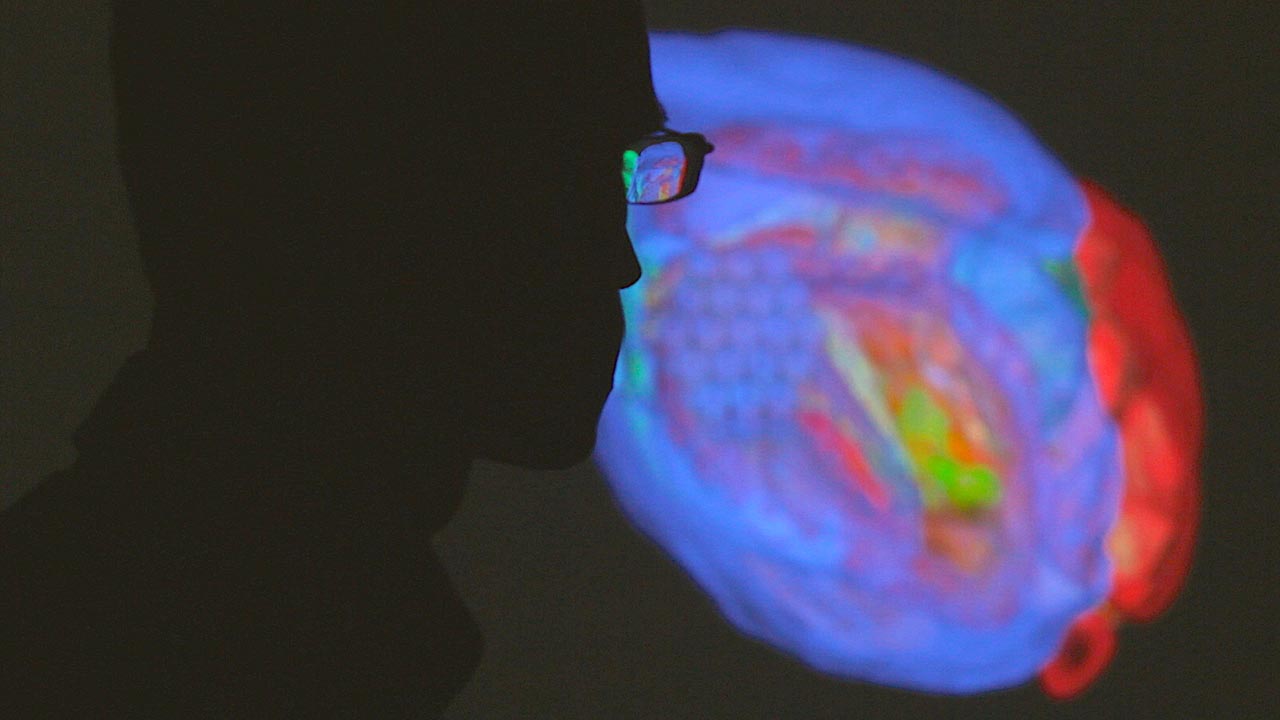 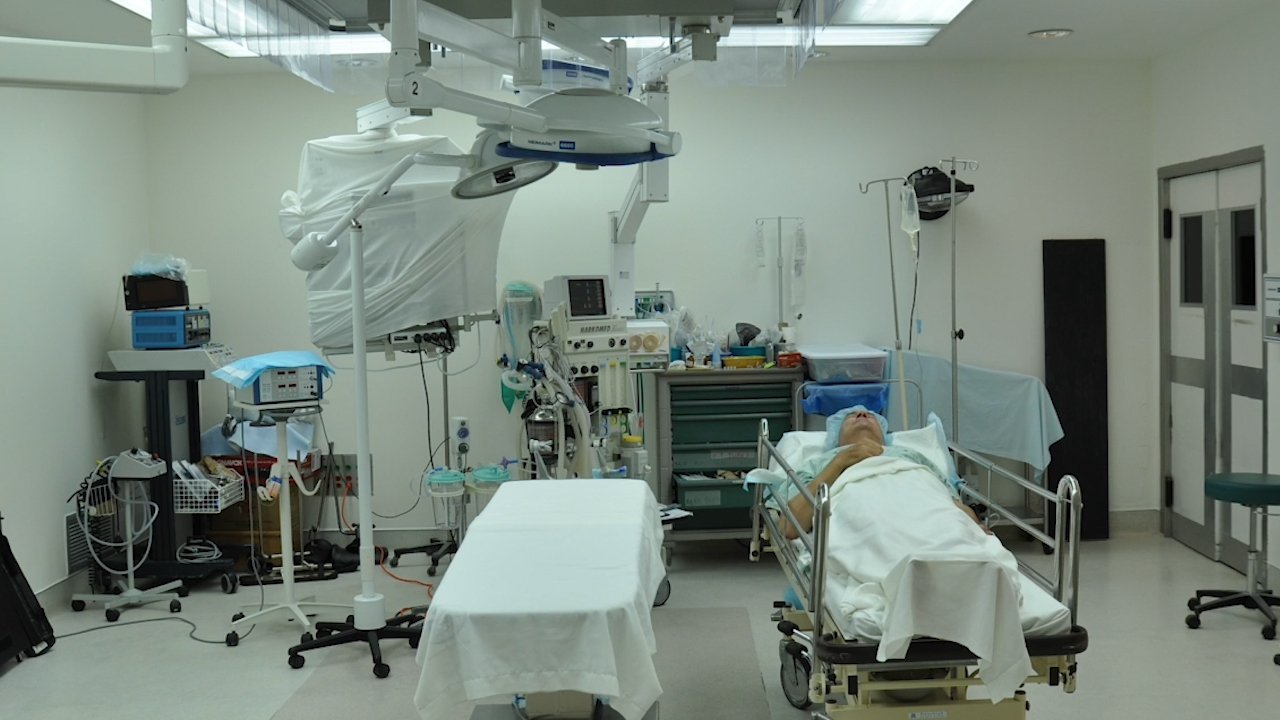 Father of the Cyborgs

Brains are big these days. Neuroscience researchers use new tools to make sense of the complex tangle of neurons making up the human brain, hoping to eventually attack the great puzzle of human consciousness. But it isn’t all pure science. Innovative medical developments in neuroprosthetics include digital brain-computer interfaces (BCIs) inserted into brains that allow paralyzed people to manipulate devices by thought alone. Some observers believe that BCIs could also replace conventional computer input devices, providing seamless connections direct from brains; or in a larger dream, even merge human minds with AIs. Two Labocine documentaries each present the life and efforts of a contemporary neuroscientist working in these areas. One has a grand scheme to study the entire human brain; the other has pioneered the medical uses of BCIs.

Father of the Cyborgs is the story of Phil Kennedy. This Irish-born MD-PhD neuroscientist was the first to put a BCI into a paralyzed person, who could then break out of his “locked-in” state and communicate with others. The film opens with an overhead shot of foamy sea waves advancing up a beach, with a crackling sound as background. We understand the scene as a metaphor for Kennedy’s efforts when he says in voice-over, “This is the sound of your brain firing, the vast interwoven loom of electrical activity. My life’s work has been to connect these brain waves to machines, a field known as brain-to-computer interfacing. Ultimately I believe it will lead to the enhancement of human brains.” More than his life’s work, the film reveals that Kennedy’s commitment even threatened his own brain. 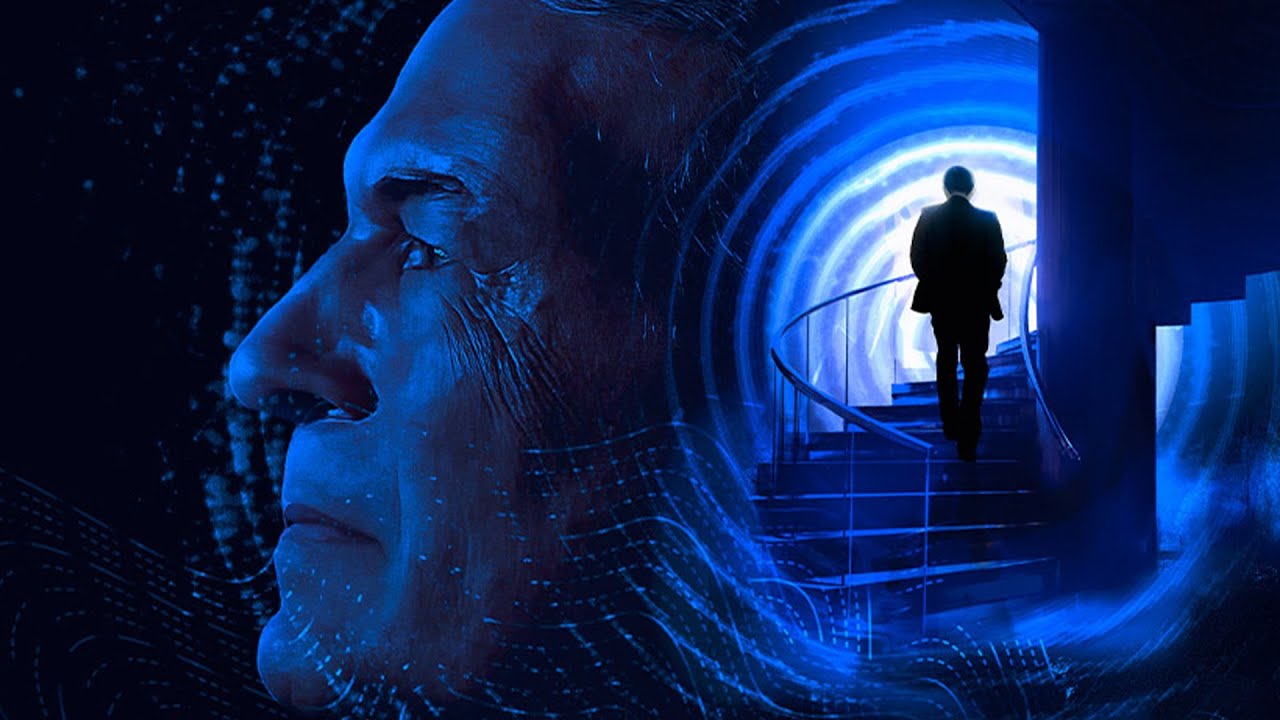 Father of the Cyborgs (David Burke)

To understand this story, it’s essential first to grasp the basics of the brain and brain implants. With simple visuals and voice-overs, Father of the Cyborgs surveys the brain, its neurons, and their electrical activity; then explains how electrodes put into the brain can pick up its internal signals and carry them to a computer.

Continuing on, the film shows Kennedy’s early life and his choice to become a physician, both to help people and to do research. Coming to the U. S., he held positions at Emory University and Georgia Tech in Atlanta, then developed the novel brain connection he had invented, the neurotrophic electrode; as the film shows, a tiny glass cone containing two gold wires. Placed in the brain, neurons would grow into the cone, firmly anchoring it and making electrical contact with the wires. In 1996 Kennedy with a neurosurgeon colleague implanted these electrodes in the brain of Johnny Ray, a paralyzed middle-aged stroke victim. The film shows the scene when Ray first spelled out his name as he moved a cursor by thought alone to pick out the letters on a computer screen, an event that gained Kennedy international recognition and awards.

The next four implantations however were not huge successes. In 2014, Kennedy’s research funding ended and he made a drastic decision: to gather further data, the sixth implantation would be in his own brain. Despite misgivings from family and colleagues, Kennedy had a neurosurgeon in Belize insert the implants. He suffered seizures soon after, but his brain eventually stabilized and he was able to continue analyzing data from his implants. Father of the Cyborgs ends as Kennedy speaks, with breaking ocean waves again in view as the sun sets. Secure in his belief that BCIs will help the injured and ill and eventually all humanity, and dismissing the issues around his own implantation, he says “I never thought of quitting…there’s an endless road and we’ll just walk as far as we can.”

Father of the Cyborgs includes expert commentary about Kennedy’s achievement and its legacy, and the ethics of his self-implantation. BCIs have now been placed into some three dozen immobile recipients allowing them to variously use computers, operate robotic arms, and produce speech, vindicating Kennedy’s faith in the medical value of BCIs. Today there are also proposals to turn BCIs into consumer devices for computer access. But a great stumbling block remains, as the film makes clear when it shows in gory detail the surgery that put a BCI into Kennedy’s brain. It is hard to believe that anyone watching this or knowing the aftermath for Kennedy would ever voluntarily have electrodes inserted, no matter how cool the result. In fact, in 2015 lingering effects from Kennedy’s implantation forced him to have part of it removed. 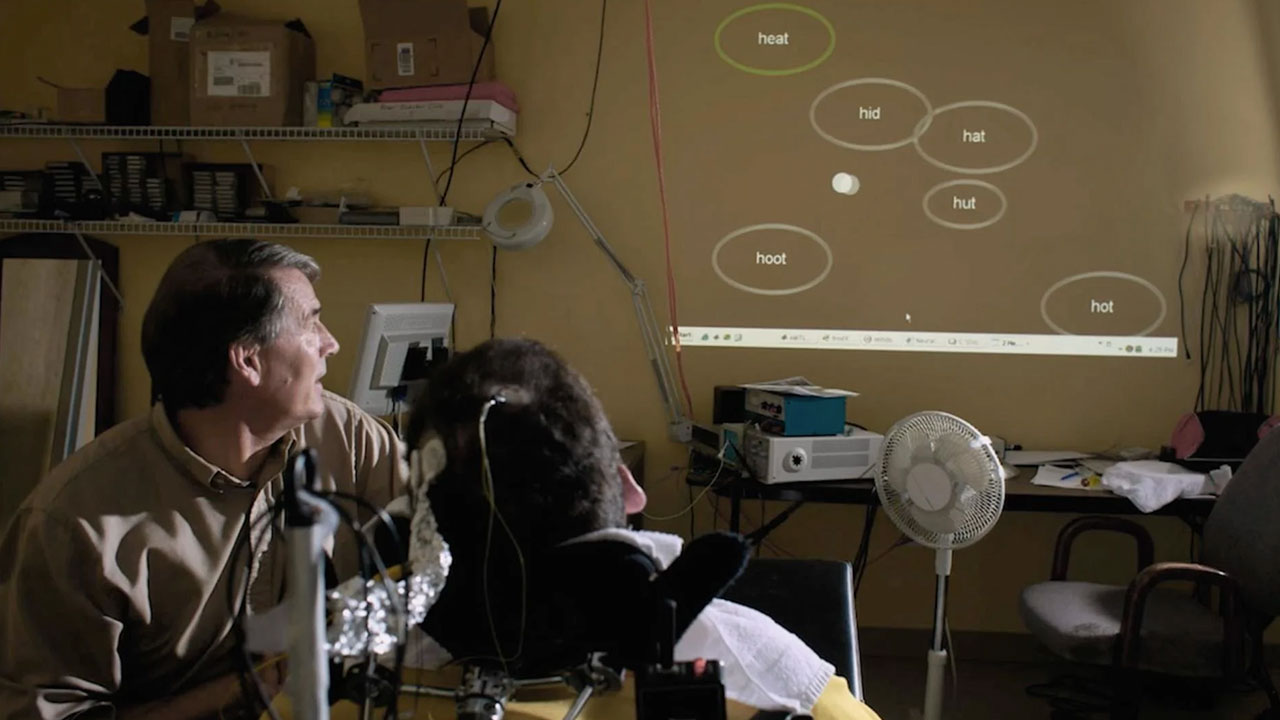 Father of the Cyborgs (David Burke)

From the difficult clinical task of putting intrusive components into living brains, In Silico takes us into a long-term effort to make a faithful, fully operational but bloodless model of the human brain. This generated a parallel mission for the film’s writer-director Noah Hutton, who followed the project for years. He opens the film by describing the evolution of the extremely complex human brain, a complexity that is underlined as eminent neuroscientists each tell us how very little or even “nothing” we know about the brain. But then Hutton  introduces a neuroscientist who believes he has the answer.

This is South-African born Henry Markram, who became known in the 1990s for studying neurons in animals. We watch him confidently assert at a TED talk in 2009, “It’s essential for us to understand the human brain if we do want to get along in society and I think it is a key step in evolution…our mission is to build a detailed realistic model of the human brain…we can do it within ten years.” Instead of laboriously studying the brain and its behavior in vivo or in vitro – that is, respectively within a living organism or externally such as in living cells in a Petri dish – Markram boldly proposed to study it in silico, as a simulation stored and running within a computer’s silicon chips. Markram dubbed this effort “Blue Brain” after the IBM computer Deep Blue that had defeated chess champion Gary Kasparov in 1997. 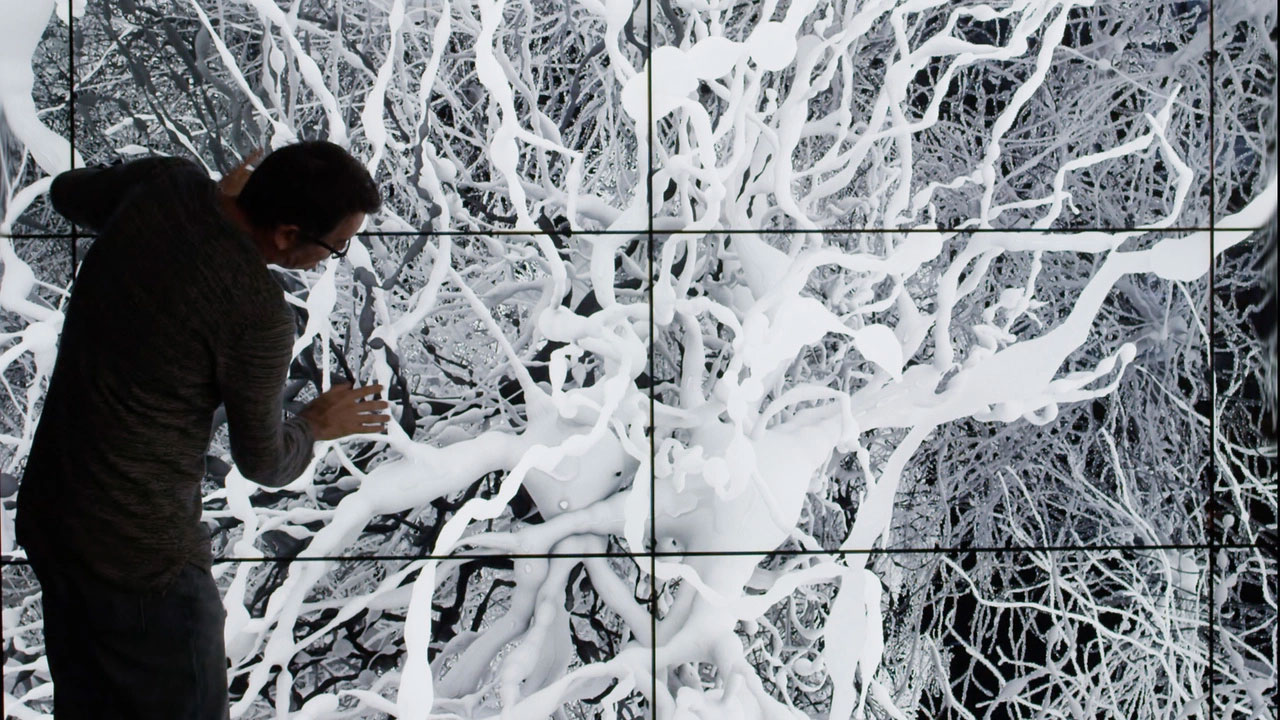 In 2010 Hutton began filming his documentary about the project, which was being carried out on an IBM supercomputer at Markram’s home institution EPFL, the Swiss Federal Institute of Technology in Lausanne. The film tracks Hutton’s regular visits as the project continued, presenting his interviews with Markram and the research staff and Hutton’s reports on Blue Brain’s progress, interspersed with comments from outside experts. Many doubted the feasibility of using simulated neurons as building blocks for a model brain when neurons themselves are not fully understood, or questioned that this approach would give meaningful insights. Hutton too saw hints that the simulation was running into difficulties. But in 2013, Markram scored a tremendous coup when the European Union funded and expanded Blue Brain as the Human Brain Project (HBP) with €1 billion ($1.3 billion) under his leadership.

This huge triumph was short lived. The film relates how in 2014, over 800 European neuroscientists signed an open letter questioning Markram’s science and his management of HBP. In 2015, outside reviews recommended that Markram’s and Blue Brain’s roles in HBP be reduced. Supported however by the Swiss government, he continued to work on and defend his vision. But by 2019, Hutton says in voice-over, he felt the need to end his own ten years of connection with the project and its ever-receding time horizon. As for actual results from Blue Brain, according to the film, it has so far simulated only a portion of a mouse’s brain, an infinitesimal collection of neurons compared to the 86 billion in the human brain. 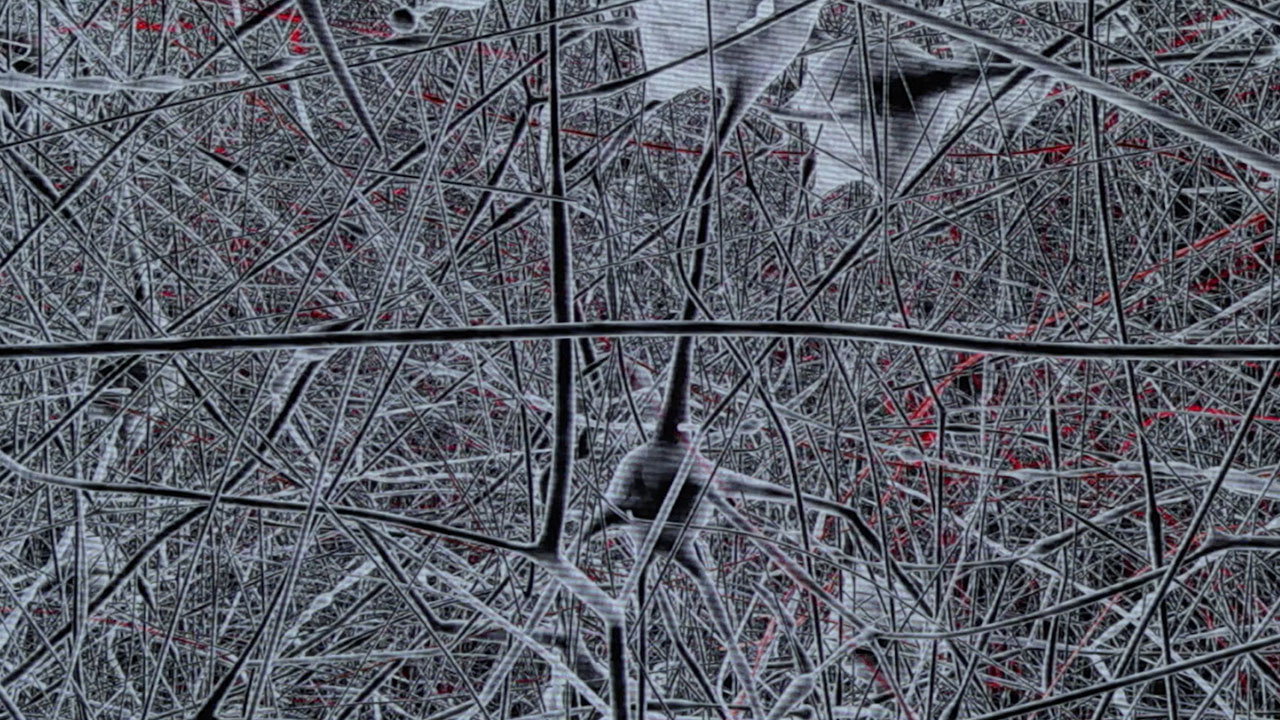 Between them these two films show the medical promise that BCIs hold for millions of people, and simultaneously show how careful we must be in daring to disturb or draw conclusions about a brain we are barely beginning to understand. The films work well too as portraits of two scientists. Their personal demeanors are different. Kennedy, who I met in 2003 when I interviewed him for a book, came across then and still does in the film as relaxed and at ease. Markram instead displays a charismatic intensity. But each deeply believes in his ideas and has the steely resolve and perseverance to carry them through, whatever the personal cost and whatever the opinion of the scientific community. That kind of drive has the potential to change science.

Sidney Perkowitz is the Charles Howard Candler Professor of Physics Emeritus, Emory University. He writes frequently about science and film, and science and society. His latest books are Physics: A Very Short Introduction and Science Sketches: The Universe from Different Angles. http://sidneyperkowitz.net