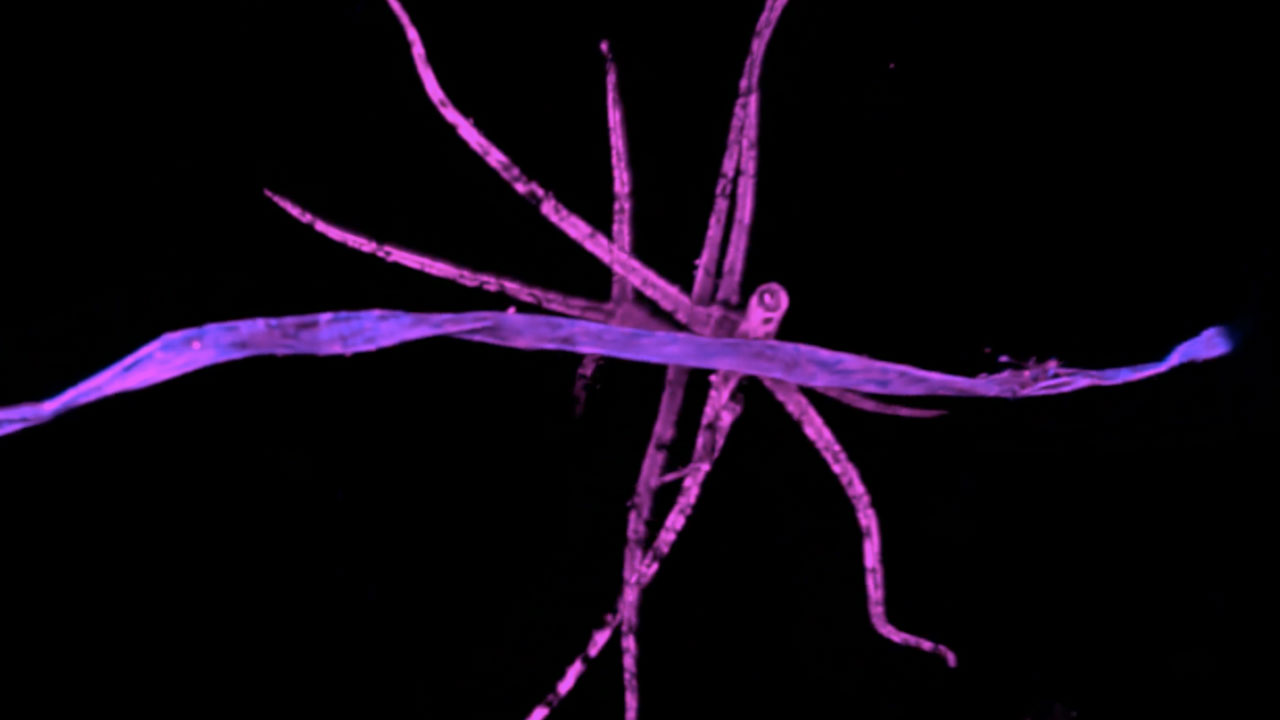 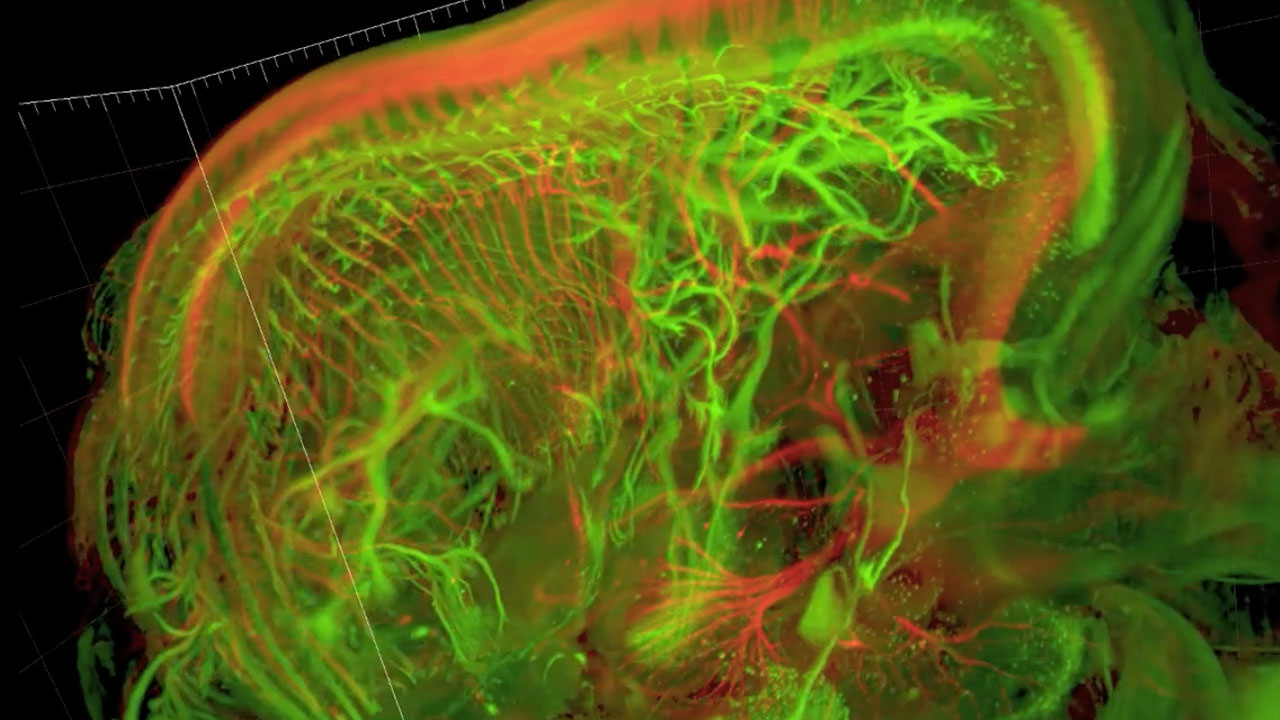 Sensory and motor nerves of the mouse embryo at 13.5 days 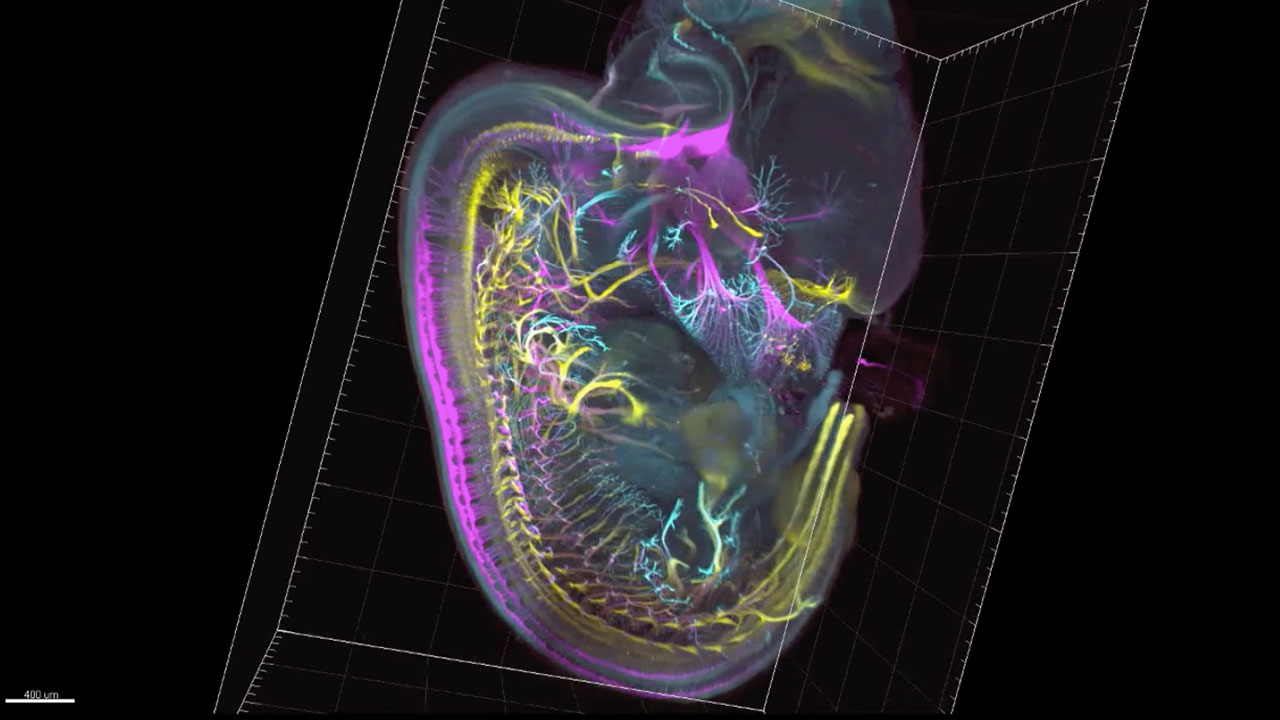 Sensory and motor nerves of the mouse embryo at 12.5 days 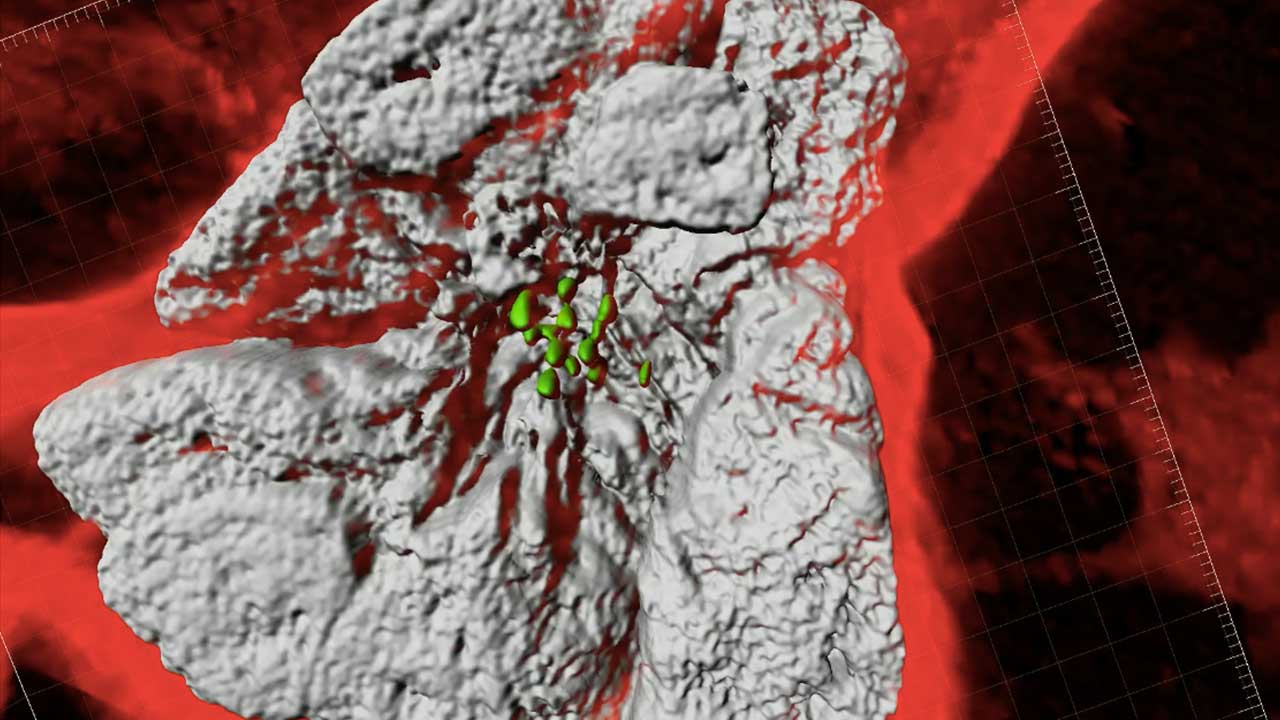 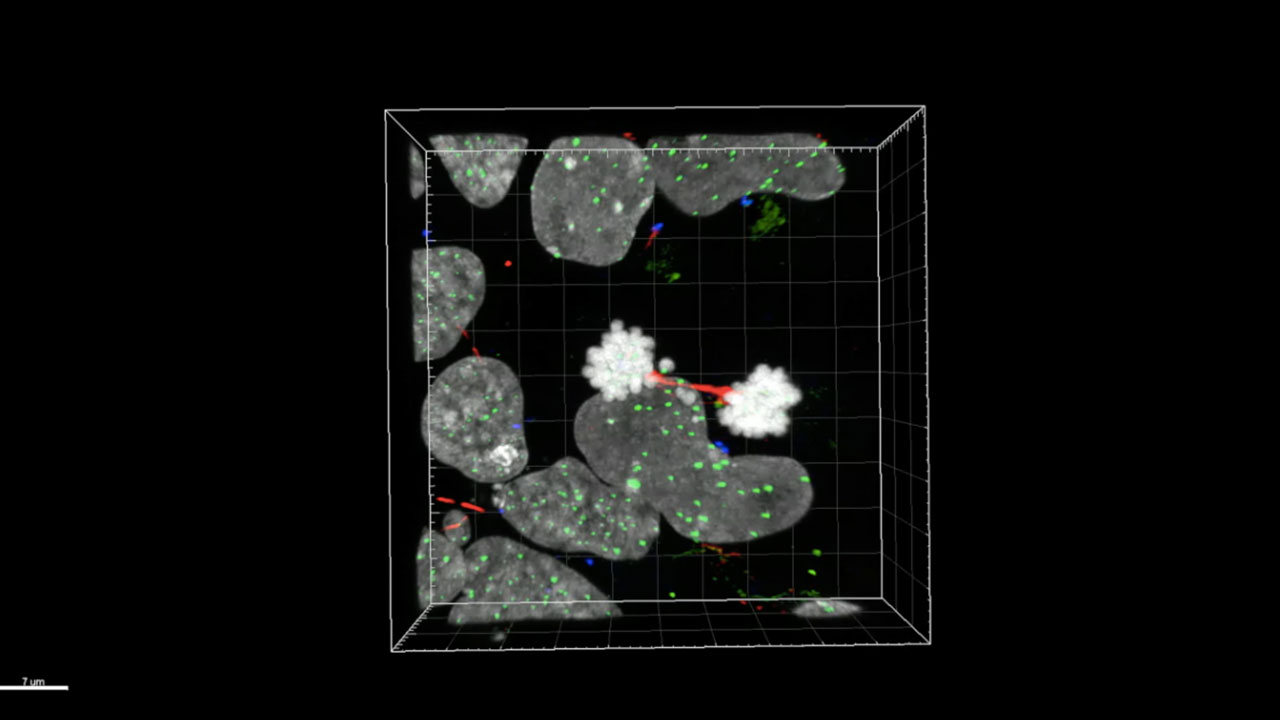 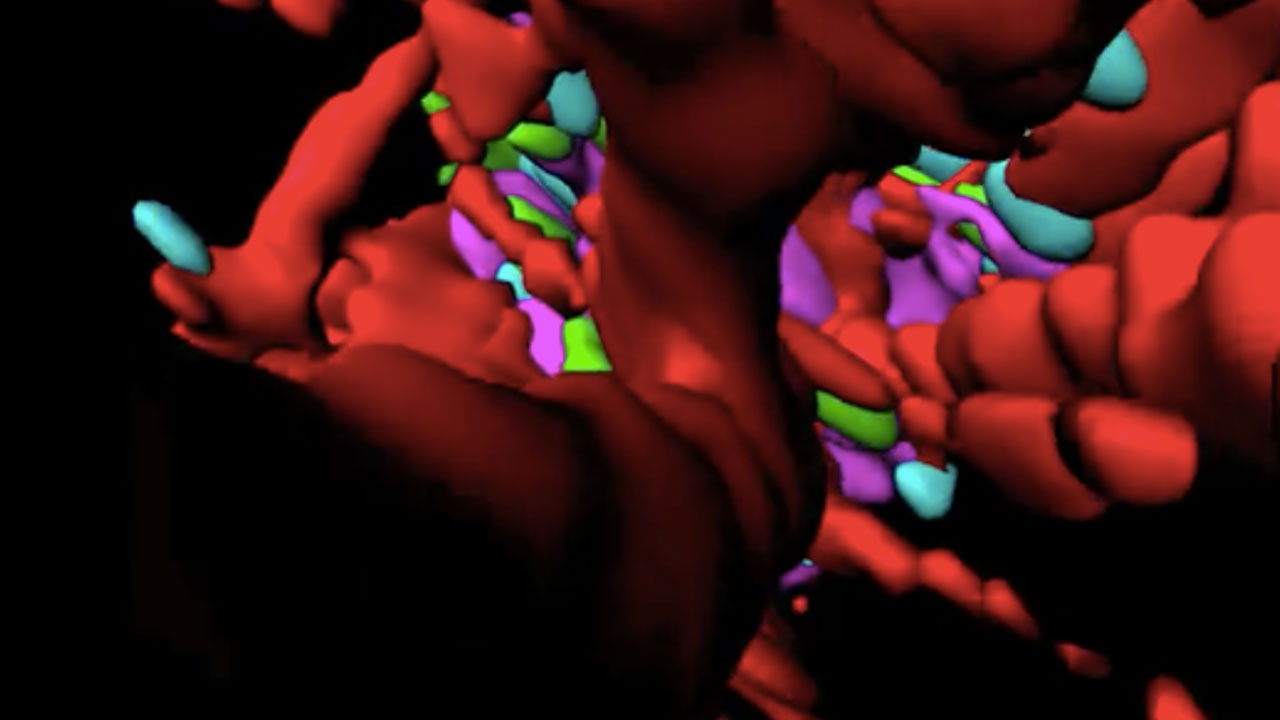 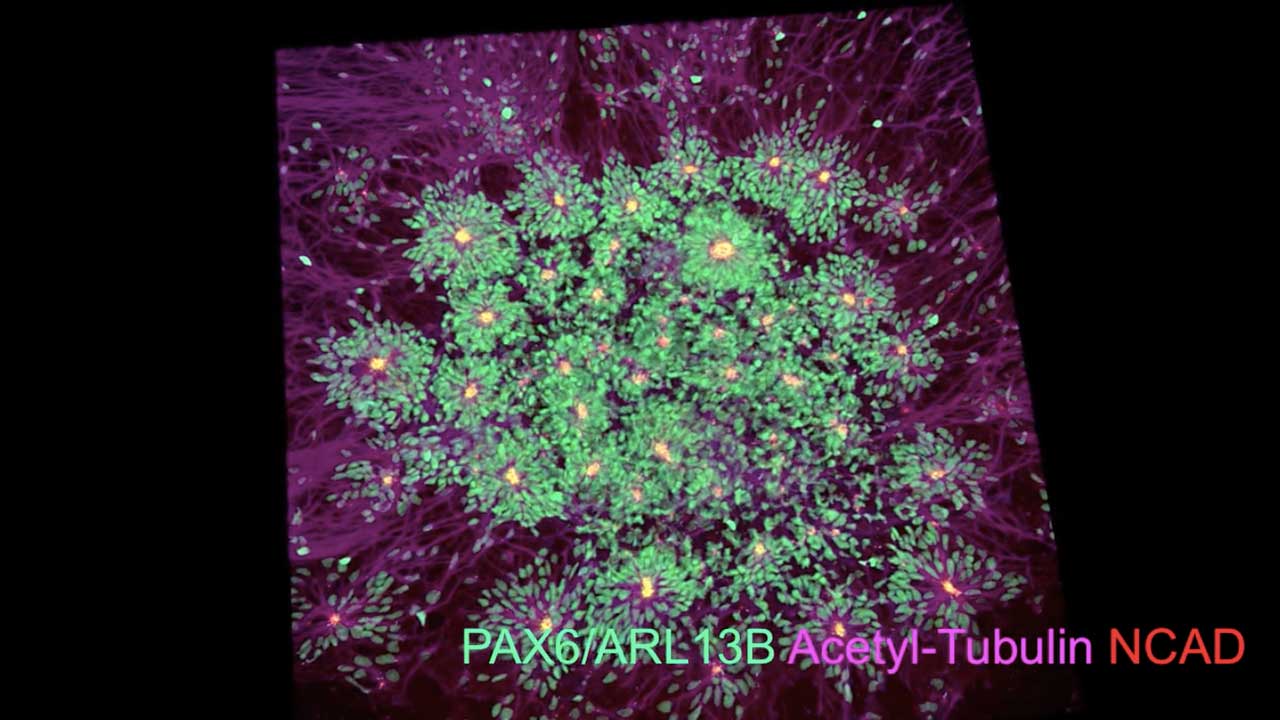 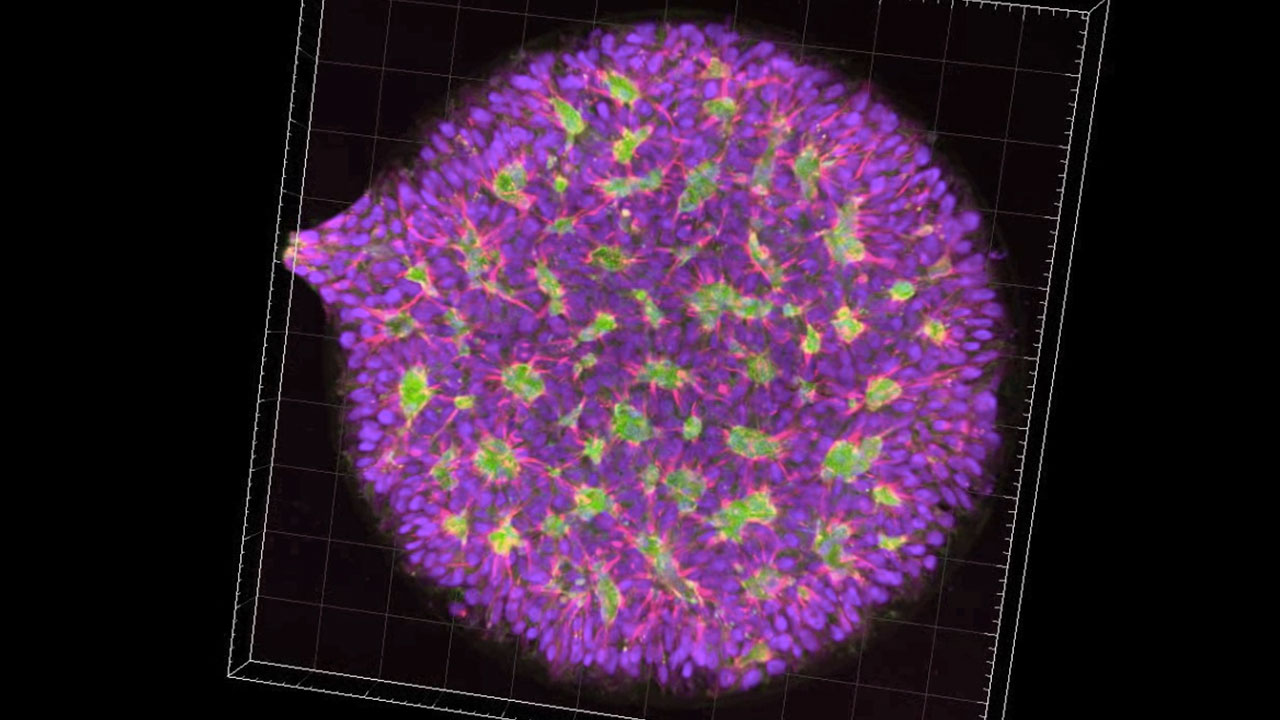 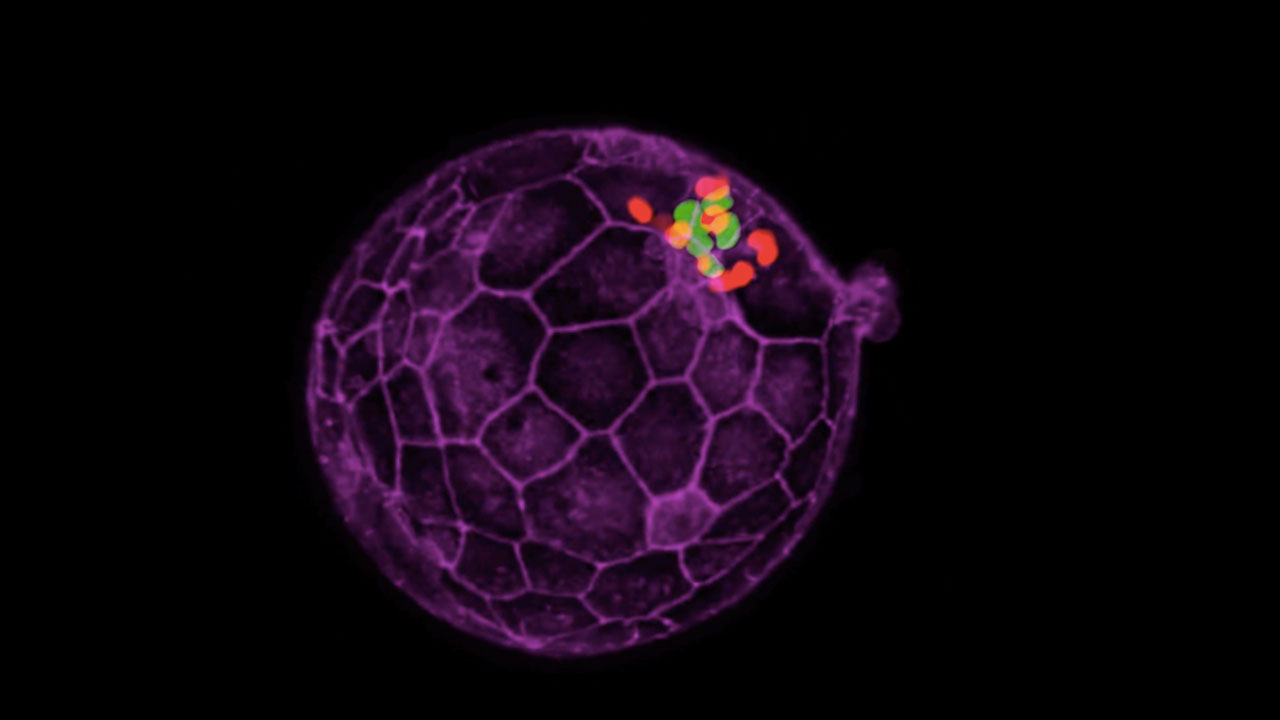 Hatching of the Human Blastocyst at Day 6 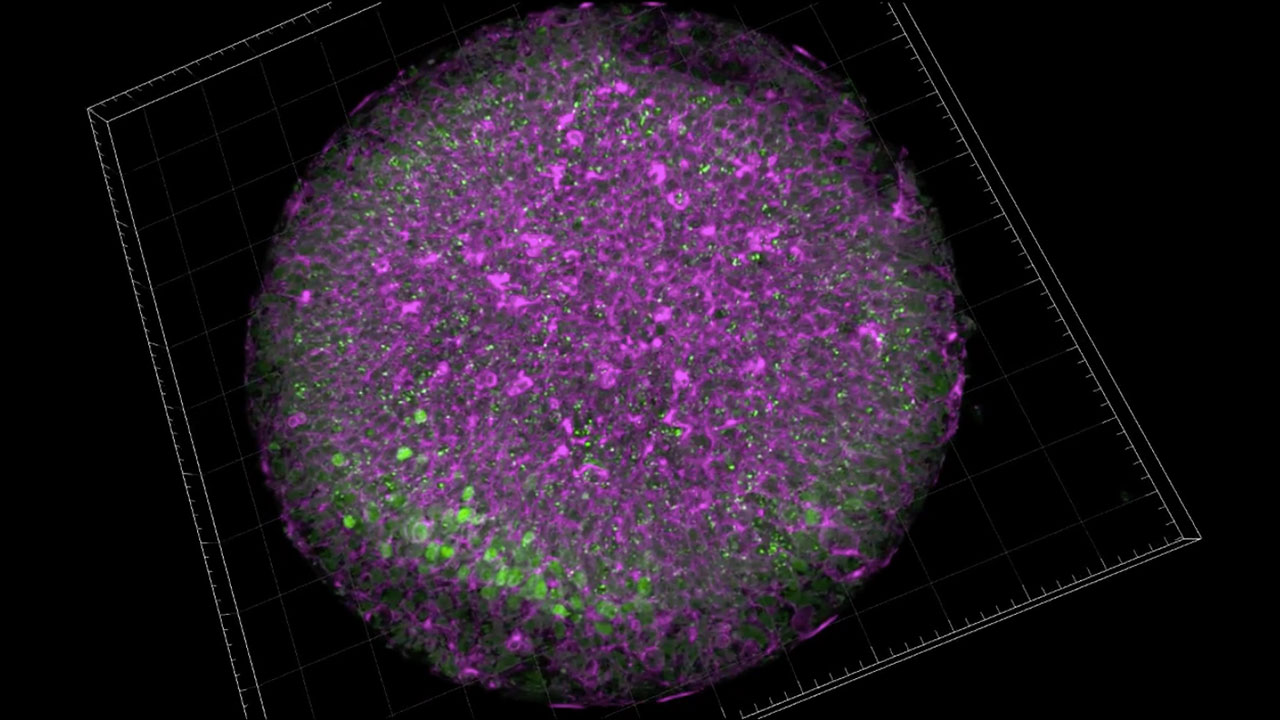 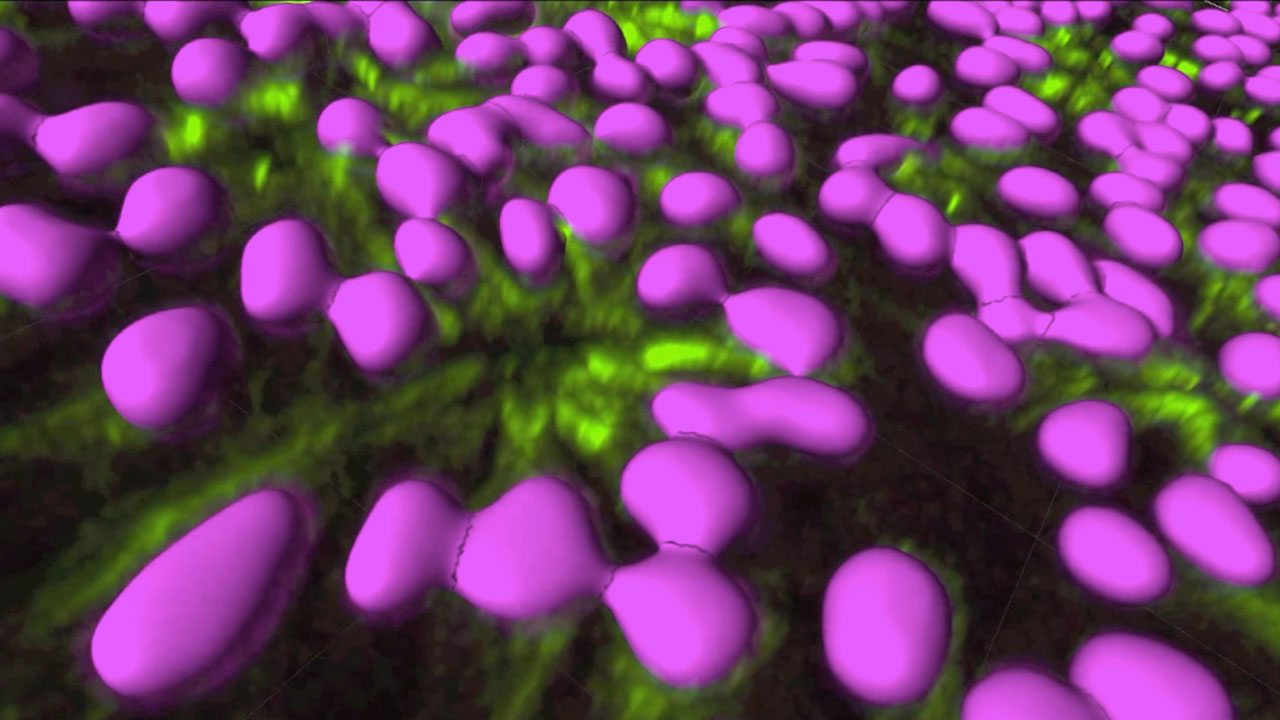 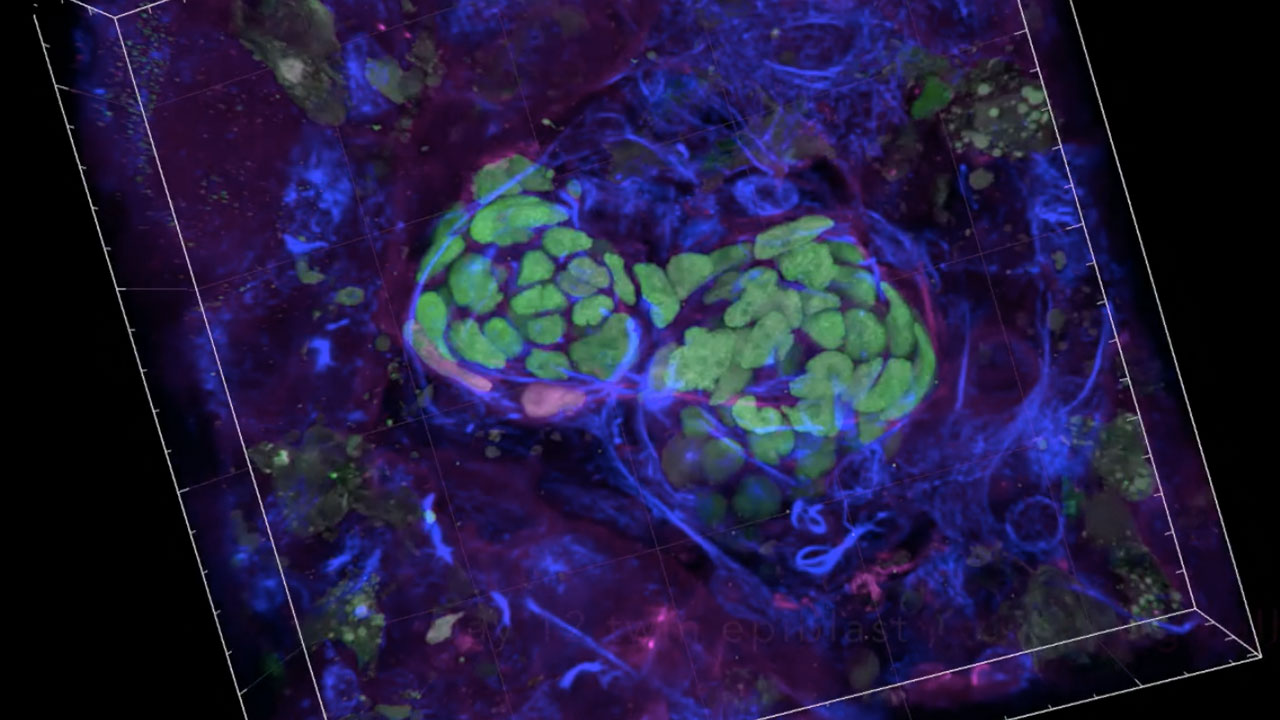 I am a postdoctoral researcher in the Brivanlou laboratory of Molecular Embryology and Stem Cell Biology at The Rockefeller University in New York City. My career goals are to understand the biology of human embryonic stem cells and use them to study brain development and disease. I trained at Columbia University, and, with support from Project ALS, used the first generation of iPS cells to study Lou Gherig’s disease. Over the past 5 years at Rockefeller, my interest has focused on two specific questions: “Where do embryonic stem cells come from?” and “What can they tell us about brain development and Huntington’s Disease?” My work has often focused on the behavior of cells, both individually and as they interact with others, in the petri dish and in animals. Cells and tissue are miniature and basically invisible, but much progress has been made in biological (GFP for example) and microscopy visualization/technologies to magnify these microscopic entities. I realized that visualizing the structure and gene expression of individual stem cells and neurons, in detail, was an indispensable approach to understanding them, in space and time, in tissue culture and in developing embryos.

Getting a picture which is good enough to make a scientific point is challenging, requiring optimized settings of dozens of variables in dozens categories (sample preparation, labeling, imaging, image analysis and visualization). If they are all optimized then for all aspects of each channel it is like when a subject comes into crystalline focus from a medium blur: when the undulating ruffle of lamellipodular membrane on a neurite sharply reveals another level of complexity, and the logic and the beauty of nature is unveiled in a new way. Optimization must be repeated for every color (3 to 5 in a samples) each of which is showing a specific molecule. This is then repeated for every plane of focus, 20 to 600 to cover the entire sample top to bottom. This generates an 3-dimensional dataset in 3-5 colors: an n-dimensional object which is greater than the sum of its parts in both information content and aesthetic possibilities.

The Object of Inquiry Sets the Categories of Its Own Analysis

Visualizing imaging data has traditionally meant a series of 2 dimensional pictures in single greyscale colors, from orthogonal perspectives. 3D rendering builds an object from data in 3D virtual world, thus allowing free choice of any perspective, rotation and zoom. This generates a new visual vocabulary including movement, alternation and combination of channels, and oblique sectioning. In general, each movie needs to explain one or a few specific things about a sample, therefore each movie more or less has a narrative which is generated by what the sample is telling us.  In a sense then, the object of inquiry sets the grounds for its own analysis. This is also the case for development of the visual vocabulary: most elements of my visual vocabulary were generated to illustrate a specific feature of a specific sample. For example in order to show the the cell bodies of motor and sensory neurons at the same time as their axons traveling away from the spinal cord, I needed an oblique section that changed angles as it translated in space (See Video: Sensory and motor nerves of the mouse embryo at 12.5 and 13.5 days).

Once the sample is represented in n-dimensional space, there are the infinite possibilities for how it is displayed. As in the narrative point of the movie, the sample itself recommends some of its own terms, but most options are a matter of free choice, which thus opens the door for aesthetic freedom.

Most basic is the choice of pallet and brightness and contrast adjustment.  Most important though, is movement in time. In 3D space rendered on a 2D screen, movement is essential to suggest visual perspective, foreground vs background, the coherent illusion of depth.  The pace of movement must not be too fast or too uneven, though changes in pace of movement have a very powerful visual drama. Various types of “virtual slicers” which project a plane through an object at any angle, are extremely useful to show the specifics of 3D architecture and transitions or continuity between elements.  As in the whole sample, the slicer should usually be in motion.

Typically I start with an overview of all channels in complementary colors, in a slow rotation to get a sense of the entire sample,  turn on and off all individual channels in all combinations, to show where the molecules are in relation to each other. Usually this requires up to a 300% zoom as we fly in. In general I try to achieve a synthesis of information dense sequences and something that appeals to me aesthetically and generates at a dramatic tension of its own or in dialogue with the scientific narrative.

The exercise of aesthetic freedom in creating the visual drama transformed these categories into bona fide ends in themselves for me.  The synthesis of music with these visual narratives seems obvious to me now.  But the initial inspiration arose from a specific confluence of events. In January 2016, I was generating the data which would become our May 2016 Nature paper on human embryo attachment (Deglinerti and Croft et al.).  I was just figuring out that I was going to be in the moviemaking business for scientific exposition of the embryos, and just starting to have fun with it, the week that David Bowie died.  For me and many others this meant reconnecting with some of my favorites, including Space Oddity and Ashes to Ashes. These were beautiful, haunting, foreboding and hopeful, virtuosic, curious, utterly individual, unapologetically specific in their fantasy, and inescapably modern, even futuristic. The sample I was rendering then was the day 6 human blastocyst which on a black background, with its polygonal spherical shell rotating in space and with zoom, immediately suggested to me a planet, a spaceship, or a moon (imagine the holograms of the death star tor Endor in Star Wars for example). It seemed obvious that the visually dramatic  zoom-in and pass-through of the ICM--originally meant to illustrate that epiblast (green, NANOG) and primitive endoderm (red, SOX17) cells were adjacent and completely non overlapping at this stage--should coincide with an aurally dramatic moment in the song. Since we were now actually floating in space, the slow approach and retreat therefore seemed perfect to keep it stellar.  But then the developing visuals and music began to speak to each other: the zoom intro/outro adjusted the  visual drama of the clip to the slow steady building up of the musical arc. I then went back and adjusted all kinds of things i the clip itself to enhance around the edges of this so soundtrack then enters a reciprocal dialogue with the visual rough cut that suggests further changes. This was my first soundtracked movie, and I realized that is synthetic form was also more than the sum of parts and a joyful aesthetic experience, an artwork. These multimedia compositions can increasing interest in the data they represent to others in my field or related fields, but they are particularly useful for science outreach and education. This example illustrates the way I choose soundtracks for movies. It is partly an inexplicable elective affinity between the 3D object, the visual and scientific narratives, and the mood and pacing and transition in a song I I like or have a topical interest in. Sometimes elements of historical chance, some sense of pacing and drama, or connections in subject material between the track and the images, among other considerations, can all be important.

I have 3 frontiers now

Several of my movies depict the development of the human embryo during the second week after fertilization, the period from where embryonic stem cells are thought to arise, but a phase  not previously studied in vitro or at this resolution (Day 7 to 14). Some movies were presented in Deglincerti and Croft, et al, Nature 2016, which, along with another paper, was the Science Magazine popular vote winner for Breakthrough of the Year. Some movies are remixes of those datasets and some are new.  See the abstract of our paper, or press coverage for an introduction to the important new  things we learned about human embryology and origin of human embryonic stem cells and how this work may help advance maternal/fetal medicine.

To understand  Huntington’s disease we constructed a new genetic model using CRISPR genome engineering, in human embryonic stem cells.  This model represent the disease more powerfully and precisely than any previous system and also removes the gene entirely, the most powerful way to answer a 30 year old question, “what does the normal huntingtin gene do?”  Since our model is based in human embryonic stem cells, our cells have the genetic background of a human, not a mouse or other animal, which have been used to approximate Huntington’s disease in previous decades.  Since these are stem cells, they have the capacity  to make any cell type, including the 2 specific types of forebrain neurons which die in Huntington’s Disease: medium spiny neurons of the striatum and lower layer neocortical neurons. Since human embryonic stem cells generate specific cell types in culture in fundamentally in the same way they do during normal human development, stem cells therefore for the first time offer us the only bona fide species-specific model of human development, and one we can ethically manipulate experimentally in vitro. Embryoids like this one are created from stem cells and resemble very primitive human embryos. Scientists hope to use them to learn more about basic human biology and development.

Human embryonic stem cells grow indefinitely in the lab, under specialized culture conditions, and retain their defining characteristic of pluripotency: the capacity to become any cell type in the body. We use special cues to prompt stem cells to differentiate, to become neuroepithelial stem cells, the primordial cells of the nervous system. In vitro, neuroepithelial organize themselves into characteristic flowerlike structures termed “rosettes”. Rosettes are the in vitro cognate of the neural tube in vitro. individual neuroepithelial cells are polarized: one end is apical and the other is basal. The apical sides attract and bind each other to form a ring, or sphere, with empty space in the middle. We are using the rosettes to study the earliest stages of the fatal neurodegenerative disorder, Huntington’s Disease.

Gist Croft received a BA from Williams College and a PhD from Columbia University Center for Neurobiology and Behavior under the guidance of Chris Henderson and Hynek Wichterle, where he used human embryonic and induced pluripotent stem cells to study spinal motor neuron development and disease (ALS). His career goal is to use stem cells to understand the development, evolution and diseases of the neocortex—the most distinctly human part of the brain, which integrates all sensory and motor modalities as well as higher cognitive functions.  Currently he is modeling the processes by which the developing neocortex translates early positional identity into functional specialization and also developing novel assays on neocortical neurons to identify therapies for diseases like Alzheimer’s and age related cognitive decline. Gist also serves as the Director of the Rockefeller University Human Pluripotent Stem Cell Core facility.  He has long standing commitments to science outreach, education, and advocacy, including mentoring, presentations and interviews with the public, press, patient advocates and philanthropists, and the artistic aspects of scientific imaging. Outside the lab you can find him playing with his two daughters, exercising, or reading (or thinking about writing) a novel. More about Gist Croft and his postdoctoral research here. Gist Croft and his two daughters