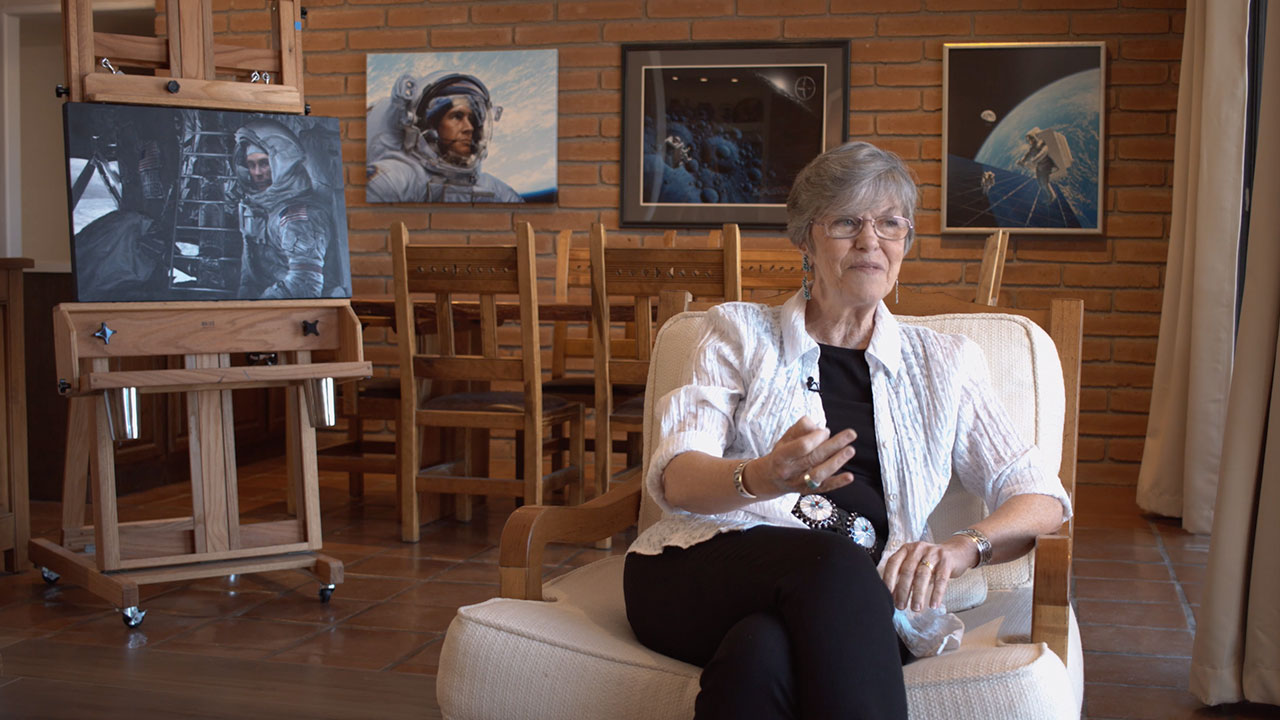 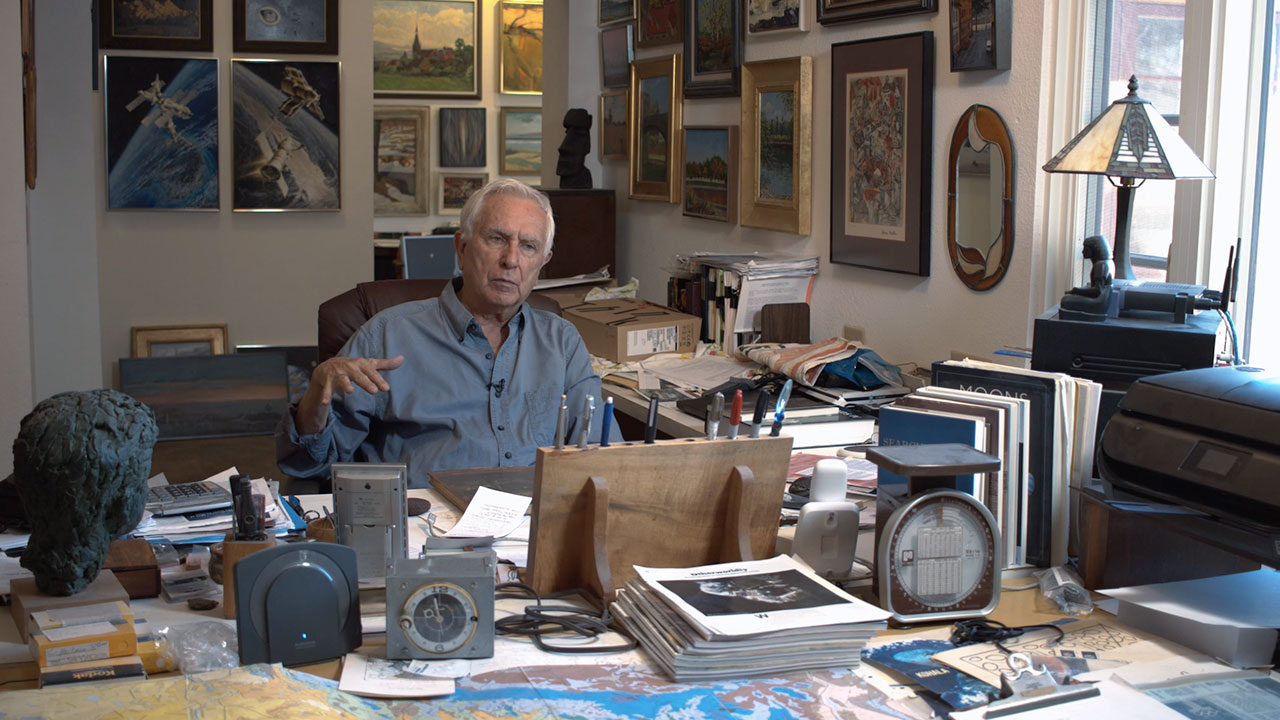 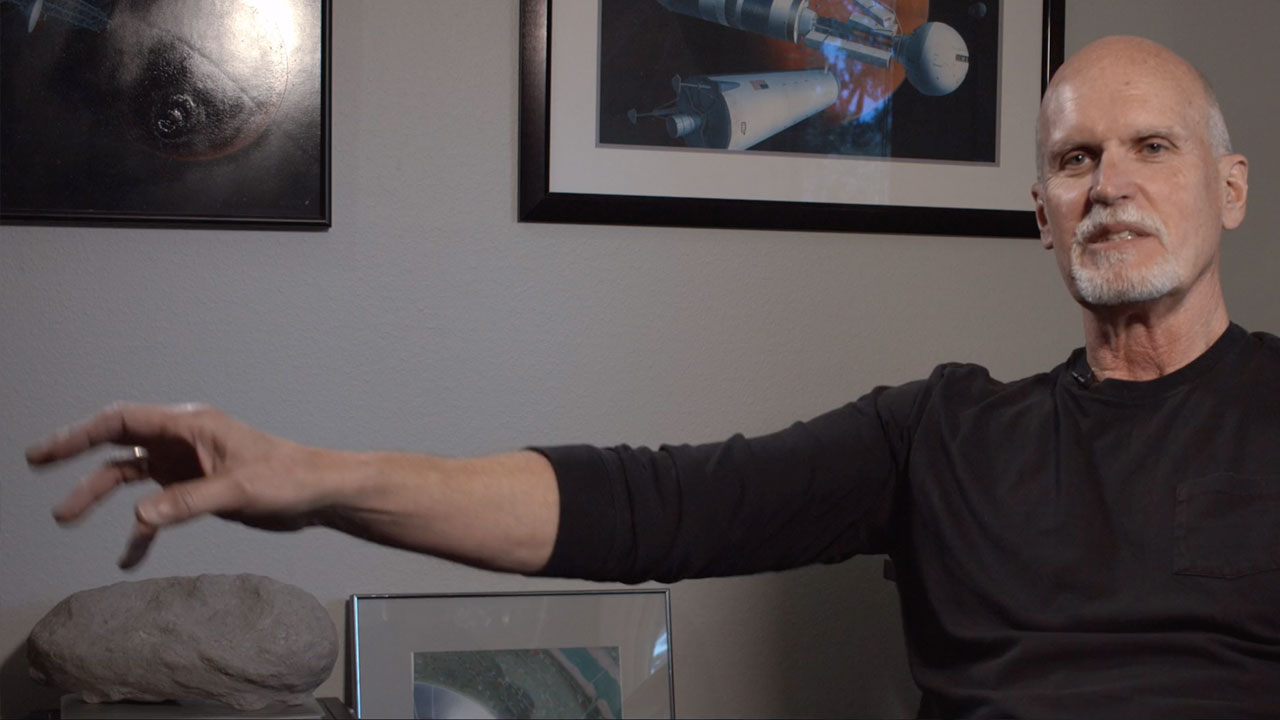 Brett Ryan Bonowicz is a filmmaker interested in documenting the lives of artists working with science to create art and scientists using art to create science.

In 2018, he released the first series Visions of the Future: Artist Depiction which delved into the lives and the techniques of artists who have done work with NASA. We’re excited to speak with him again about his just-released second Artist Depiction Series created as part of Brett’s interest in capturing and documenting the stories and history around artists and scientists creating space art. The second series has three artist profiles - Pamela Lee, William K. Hartmann and Pat Rawlings exclusive on labocine.com

I think that interest really comes from the previous film I made, Closer Than We Think. I was documenting this man’s life, Arthur Radebaugh, and there was no video or audio of him. I thought it was incredible that someone who died in the early 1970s and had had some recognition in his life for his art, could disappear in such a way. Aside from a few newspaper interviews, that was really all we had to go on Rick Guidice (who appears in Closer Than We Think) was really the catalyst interview in my mind that led to Artist Depiction. I thought “Well if we don’t document these artists’ lives in some way, they’re going to end up just being a signature on a canvas in the future.” I didn’t want to lose the opportunity to document these first-person accounts. 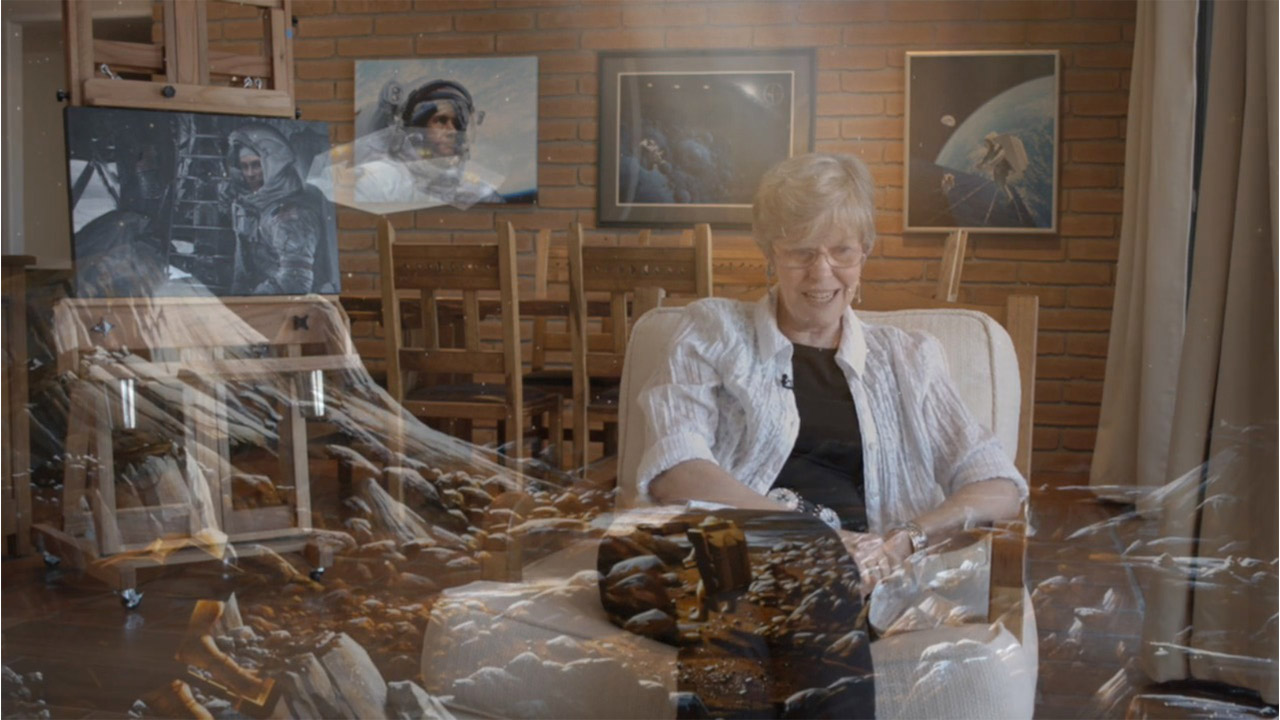 The second series came together really quickly. We already had a base of fans and an Indiegogo page from the first film where we had raised partial funding. People had been asking who we might do next, and we had some interest from a producer who actually later backed out of the project, but it was that interest that really put the second series in motion. I’d wanted to interview a couple of specific artists for the second series Pamela Lee was one of them and I’d had a difficult time contacting her which is why she wasn’t in the first series. Luckily, I was able to reach her this time and I’m thrilled people will get to see and hear her. She rarely does long-form interviews like this and I’m so happy to have people discover (or re-discover) her work.

The first series was really kind of locked down in a Bressonian simplicity. I think I was trying to get out of the way as much as possible there and really let the art and the artists speak for themselves. With Series Two, we’ve tried to open it up a bit more, creatively speaking. We’ve got drone shots, we went to multiple locations, we went handheld with the camera, it gives the second series a more dynamic feel while maintaining an intimacy of spending roughly half an hour with each artist. I really hope by the time you get to the end of each film, you feel you have a broad sense of who each of them is. 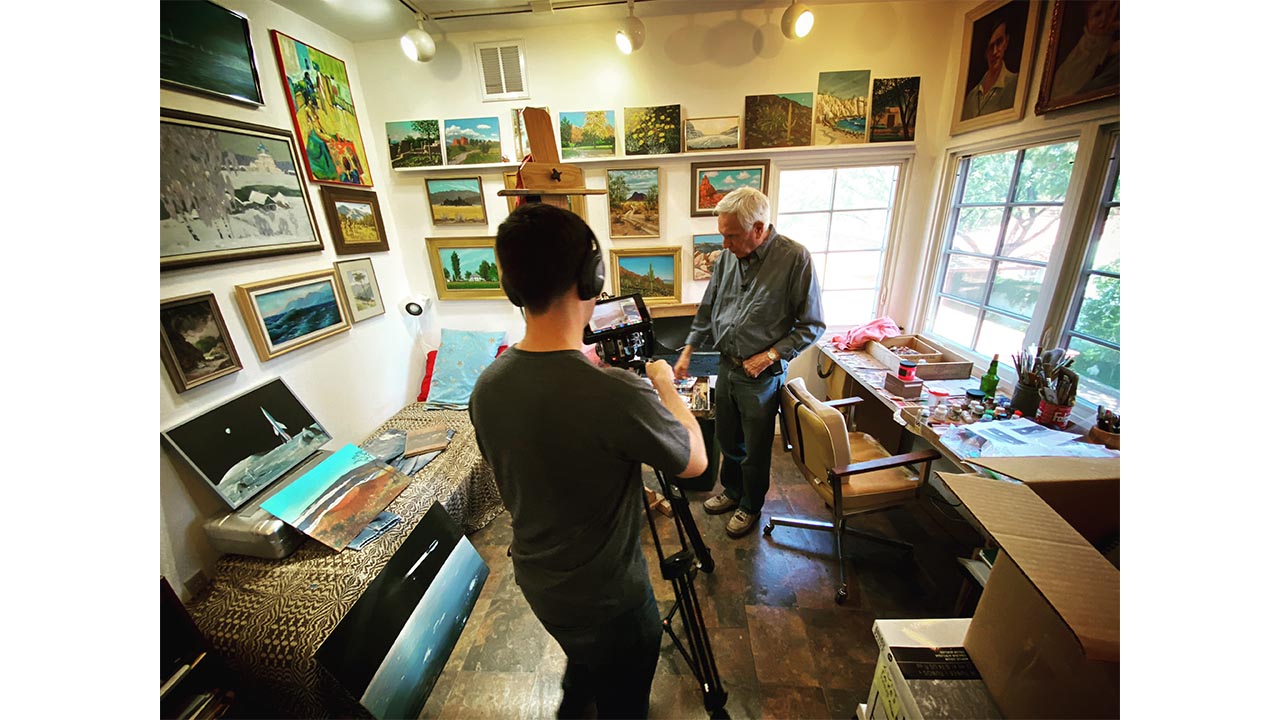 Define the common thread that links these three artists?

Curiosity - I think each of them has an insatiable appetite for curiosity and knowledge. They each have different backgrounds, but their curiosity has driven them into these areas where both heavy research and artistic expression is the norm.  I think the work of these three artists is each so unique. Pamela’s work has such romance and humanity to it while keeping the science intact. Bill is coming to art as a scientist and I think that approach informs his work in an interesting way. He draws much inspiration from science. Pat is the first artist we’ve featured who works digitally. That coupled with his engineering work and technical drawings give a unique perspective on space art that we haven’t captured to this point. Really thinking of the common thread aside from space art is difficult because in many ways the point of the series is to put a spotlight on these artists as individuals with faces and voices, and not, as I was saying before---just a signature on the canvas.

What do you hope to get out of this series?

I really want others to discover the lives and work of these artists. I’d love to continue the series, as well. I think there’s room to talk to so many other artists, and the format is really malleable as long as the interest and the financing are there. I really love the work of Ella Marushchenko and her scientific illustrations. There are a couple of space artists in England, I’d love to do a whole series there if possible. One of the amazing by-products of Artist Depiction has been the opportunity to pick the brains of so many incredible artists, many of whom I’d admired for many years. 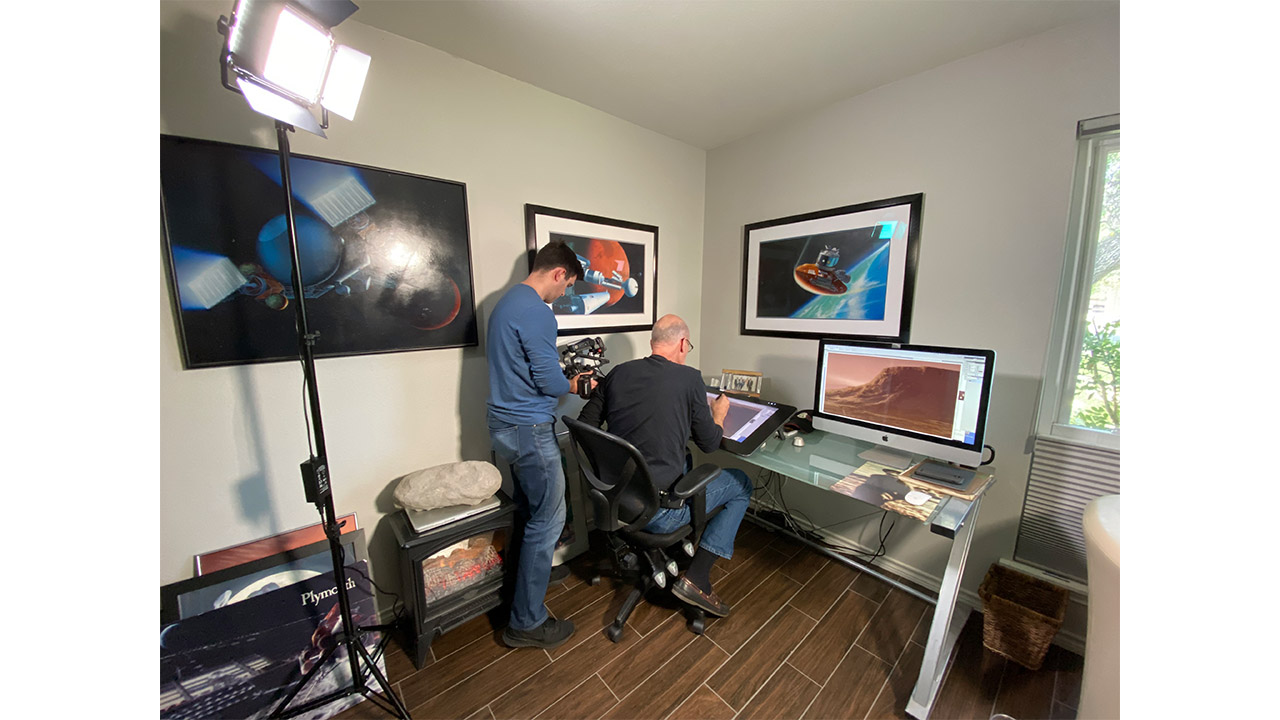 What's next? Are you working on a new project?

I’m working on a documentary about the artist Roy Scarfo. That’s very much in the earlier stages. In a lot of ways, that film is an extension of the Artist Depiction series in that we’re dealing with another space artist, but I have different plans on the execution of that film. It’s my goal with it to really make a piece about the future as an idea. The future is an abstraction and we all have different meanings ascribed to it. It’s a place we can never get to that we all dream about in one way or another. What is the human function of this idea of “future”?  I’d really like to be able to incorporate that kind of philosophy into a narrative of Roy’s life.

Trailers and more information about the film at clindar.net