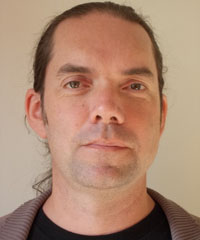 Karel Doing is an independent artist, filmmaker and researcher whose practice investigates the relationship between culture and nature by means of analogue and organic process, experiment and co-creation.

He studied Fine Arts at the Hogeschool voor de Kunsten, in Arnhem, the Netherlands, graduating in 1990. In the same year he co-founded Studio één, a DIY film laboratory. From 2001 until 2012 he was board member of Filmbank, a foundation dedicated to the promotion and distribution of experimental film and video in the Netherlands (now part of EYE Filmmuseum).

In 2017, he received a PhD from the University of the Arts London. During his research he developed 'phytography' a technique that combines plants and photochemical emulsion. He has employed this technique to investigate how culture and meaning can be shared between the human and the vegetal realm. In his thesis he proposes new forms of humility, doubt and listening to be advanced in today’s overconfident and exploitative human culture. His work has been shown worldwide at festivals, in cinemas, on stage and in galleries. In 2012 he received a FOCAL award for his film Liquidator. He regularly gives workshops in analogue film practice and is currently lecturer in contextual studies at Ravensbourne University London. He has published several articles and produced a number of films by fellow artists such as Barbara Meter and Marco Pando.

He is presently based in Oxford.