The Search for Self 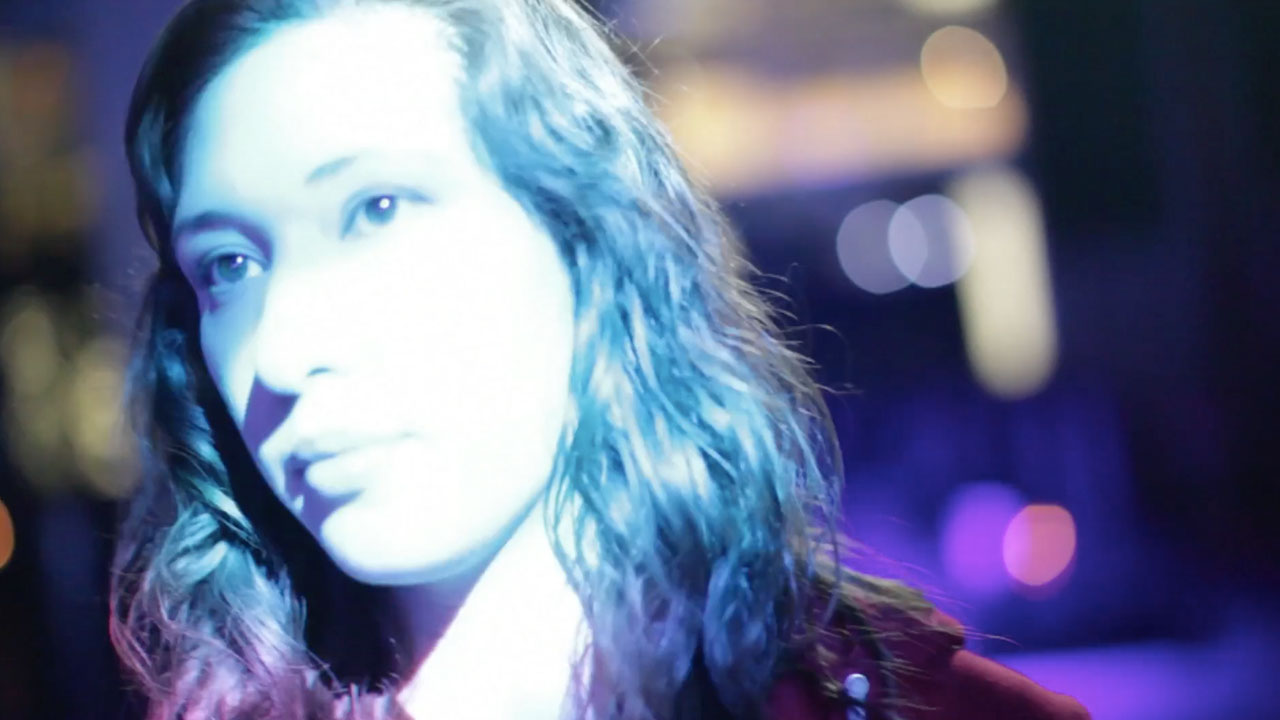 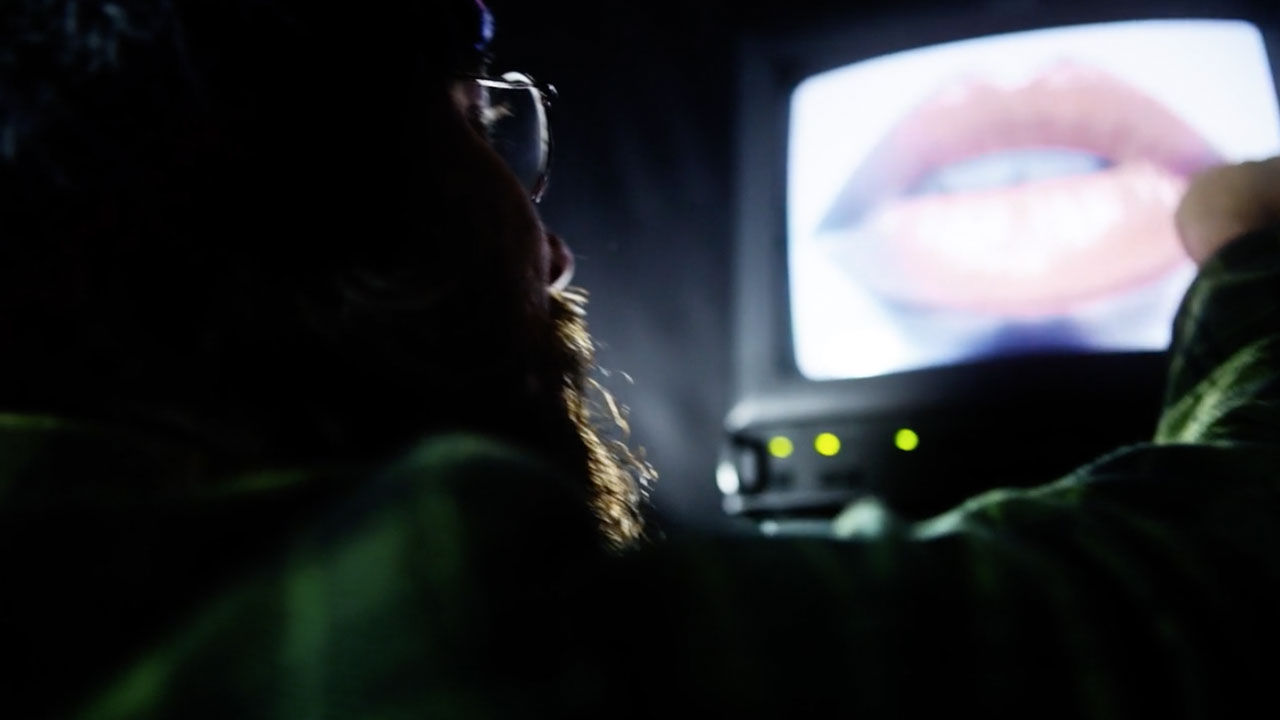 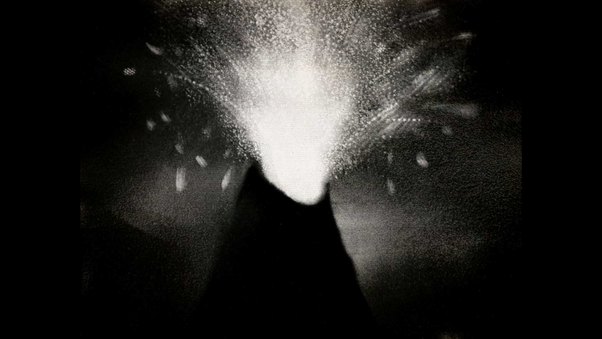 Why am I here? Who am I? Am I more than just the sum of my parts, than my physical self? At one point or another, many of us find ourselves at the hectic intersection of existential thoughts. Those thoughts might be like cars speeding by, one after another, threatening to run over our most basic and comfortable assumptions about life and our place in it. An existential crisis might be a frustrating experience rife with uncertainty—like being on a turbulent flight that we aren’t sure will make it to the final destination. Or it could also be an opportunity to more deeply understand ourselves and our world. We may or may not come out on the other side the same way we went in. But there is the chance that we make it through this search for meaning more fully formed, with more conviction in our identity, on what we want out of this life, and with surer footing having figured out our place in this world a bit more clearly.

Possibly the most daunting part of the process is overcoming the sense of the unknowable. How do we even begin to tackle such imposing and impossible questions? Part of it may be searching beyond our singular perspectives and really taking in the grander scope of things: reaching beyond the physical, emotional and spiritual parts of ourselves that we are comfortable with.

In addressing our physical selves, we know that we are flesh and blood. But Italian artist, Nicola Alessandrini, uses his artwork to investigate the human body and to explore different sides of humanity beyond our assumptions. He does this through artistic representations of bodies. In the documentary following his work, “Hybrid in Nicola Alessandrini’s Art” (2016) by Andrea Convertito and Roberto Simeone, we are brought into Alessandrini’s personal workshop. Which is sprawling; he works in the street, he creates larger-than-life pieces on public buildings, and he carefully conceives work in-studio as well. But despite his varied work spaces, there is a common theme among his art: meat. He mixes the human with the animal, and viewers are confronted with the otherness of humanity itself. Like animals destined for slaughter, we too are made up of muscle, blood and bones. So what makes us so different from meat? 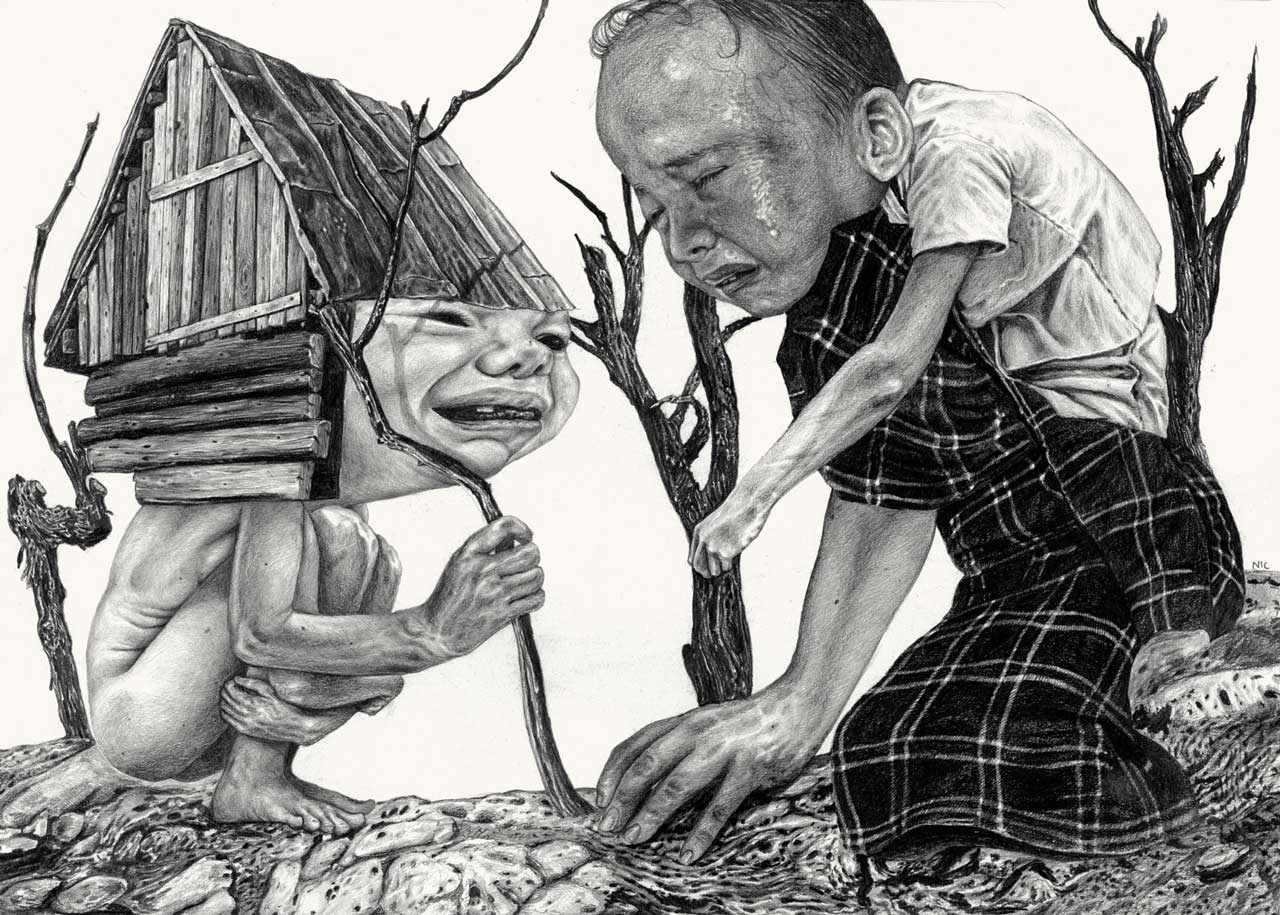 Alessandrini seems to indirectly answer that question through his art. The violent and wounded bodies that he represents create an imagery that finds new transformation and new identity. Up close, textures of the body, of meat, become more abstract. They link themselves to taste and sense more than the object themselves. The body becomes interpretable. And, as Alessandrini himself says, throught he transformation of the human body, even in seemingly grotesque ways, we can find some new beauty. We can find one-ness within ourselves and with other creatures.  We can find different sides of humanity, and the viewer can be enlightened to a different kind of reality beyond that which he usually experiences.

If Alessandrini’s art approaches questions our physical existence questions our physical existence, then “Chlorophyl” (2011) by Barry Jenkins looks at our emotional lives. Emotions may be more abstract than our physical being, but they are innate and omnipresent. Emotions link us to other people. They help us form relationships. But even so, sometimes others, and even we, fail to see the full spectrum of our emotional lives. Jenkins addresses this aspect of the self through the fictional narrative of a Mexican woman living in Miami. Throughout the film, we get a sense of her feelings and the dissatisfaction that lingers around her as those around her seem to misinterpret her. Something lingers beyond what we, her friends, and even she, can understand of herself. 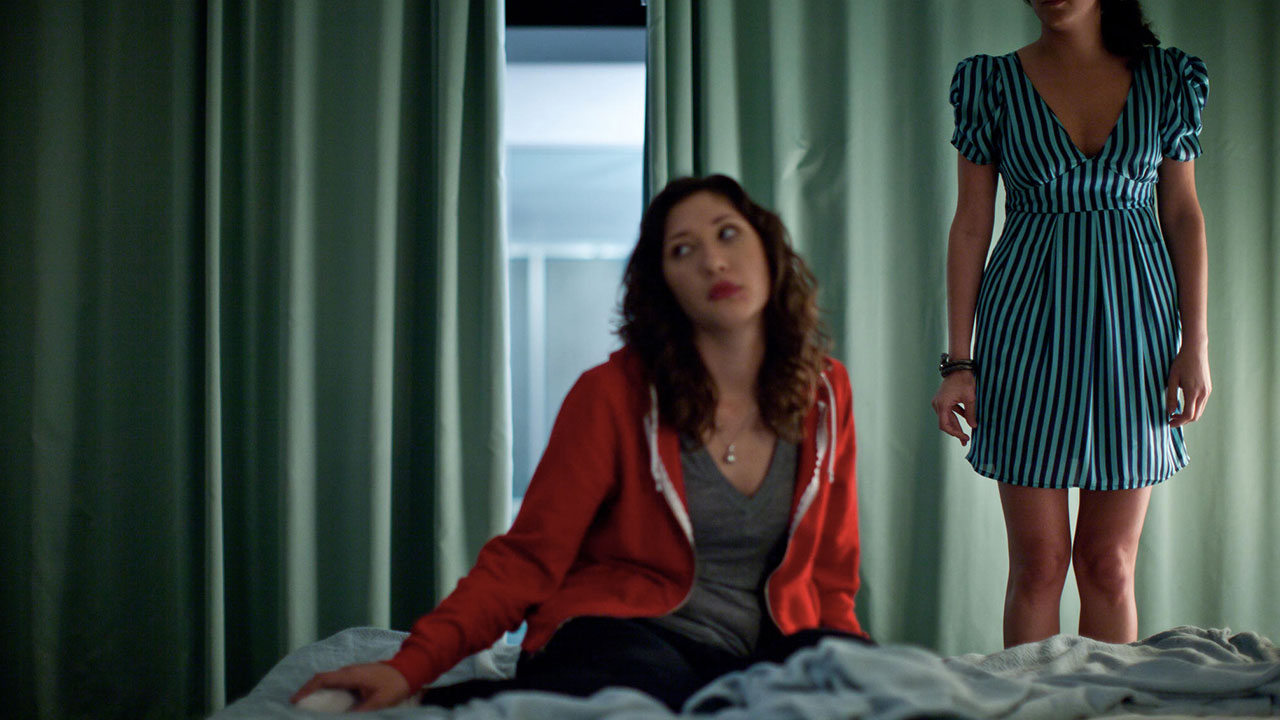 This is driven home through the metaphor of chlorophyll, which we are told, through monologue at the beginning and end of the film, can absorb blue and red light, but not green. Yet there is no scientific explanation for exactly why this is. Sometimes, you just cannot take it all. Likewise, the main character can only absorb so much, and she reflects others. But the self is fragmented. One example of this is in the use of Spanish throughout the film, the main character’s first language. She speaks in Spanish during her musings on chlorophyll as well as during an intimate conversation with a confidante towards the end of the film. Meanwhile, during the rest of the film she speaks English—and even when she does speak Spanish, she remarks that most people in Miami mistake her for being Colombian. It’s clear that she isn’t truly being “seen,” and maybe she never can be, fully. The title itself, Chorophyl, even leaves off the final “l” in the word, echoing this incompleteness. There are parts of ourselves that are invisible to the world, there are things that we cannot absorb, and our role in the world is constantly in flux and open to interpretation.

Even though questions of the emotional self can be dizzying, still there is a deeper tailspin when we dive into the abstract, painful and illuminating questions about existence itself. The spiritual self, birth, death and what happens before and after. The one-ness of existence. These ideas are hard to put into words. So, appropriately, Michèle Lemieux’s “Here and the Great Elsewhere” (2013) is wordless. The four-part animation flows through themes of the synecdoche, ancestry, the present and nothingness. And it is a unique meditation on the questions of human existence, origin and meaning.

Lemieux’s animated the film through the Alexeieff-Parker pinscreen, using the pins as a metaphor for the particles that make up the universe. The everyman protagonist of the film ventures out of his nondescript, white-walled room into a chaotic darkness. He seems to be in an existential crisis of his own as he goes beyond the self, ultimately finding that the strange particles that make up the universe aren’t so foreign after all. In the end, we are just a repetition of all that is and ever was. Perhaps then the confusion of our eternal search for meaning isn’t necessary. Even if we are born, live and die, even if we change our form, we are always the same little atoms, the same universe experiencing itself. 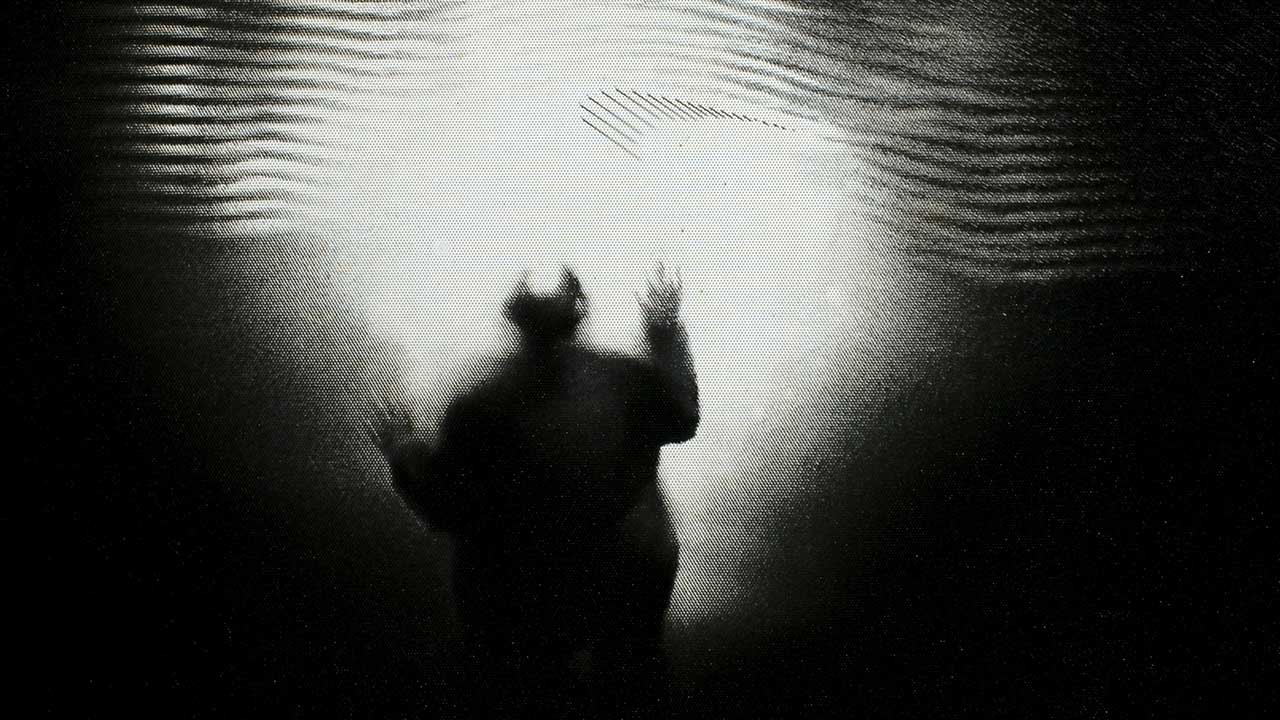 These physical, emotional and spiritual meditations on our existence may seem far-flung from one another, but they all highlight the importance of looking beyond ourselves, beyond what we know. And in doing so and asking the difficult questions, they suggest that we can find something of value. That, beyond the feelings of incompleteness, at the end there is a sense of wholeness in this world. To conclude: “We're all one thing, like cells in a body. 'Cept we can't see the body. The way fish can't see the ocean. And so we envy each other. Hurt each other. Hate each other. How silly is that? A heart cell hating a lung cell.”