Old Growth: A material metaphor for humanity’s effects on the environment 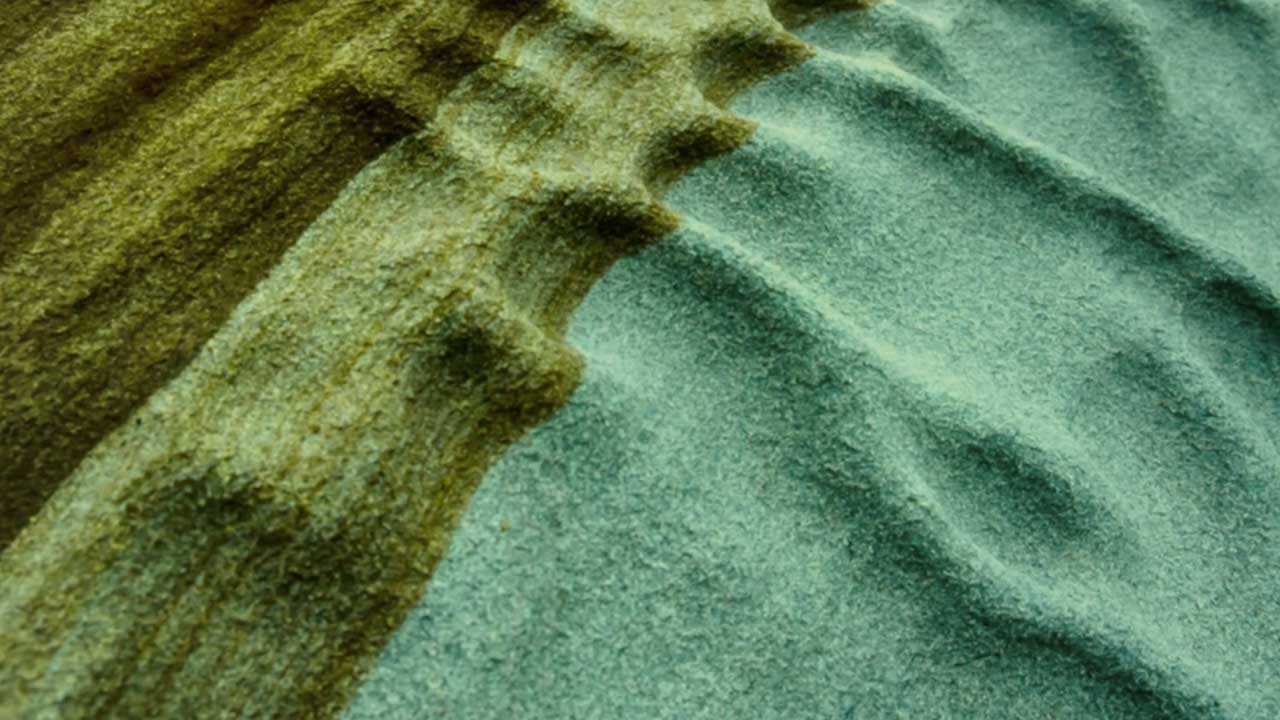 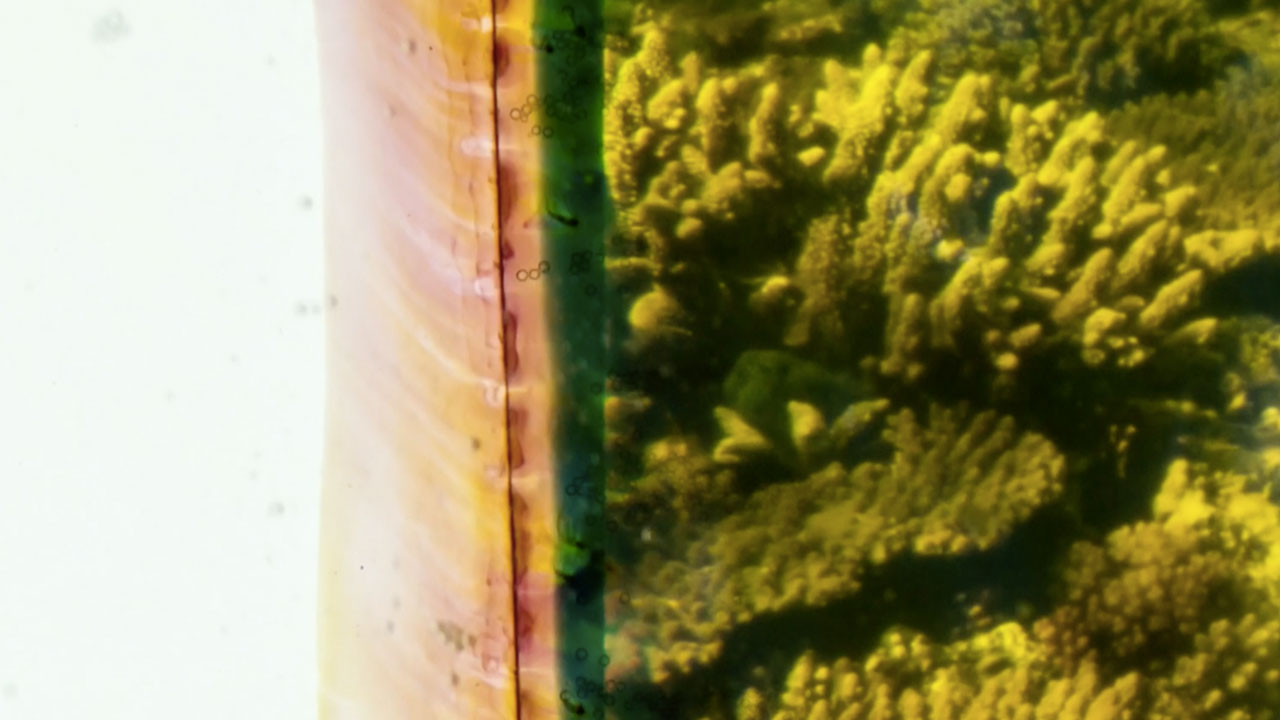 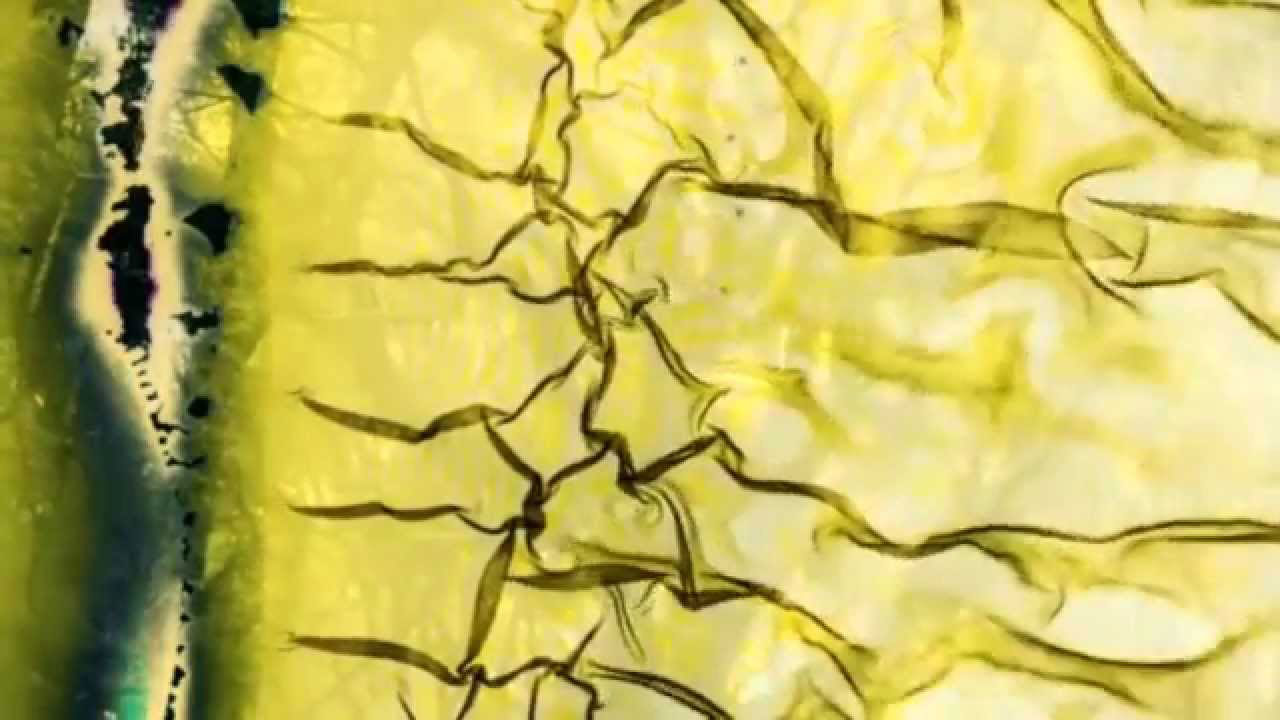 Old Growth is the name both of a series of works, and their presentation as a series of multi-screen video installations.

In total it is a work of environmental critique and material enquiry. Marrying art and science it creatively explores the effects of resource extraction and anthropogenic climate change. It takes three vital environments that accrete over time – sedimentary rock, old growth rainforest and coral reef – and subjects images of these environments on photographic film to chemical degradation.

The result is a kind of material metaphor or media analogue for humanity’s effects on the environment – thus virtual fracking, virtual deforestation, and virtual coral bleaching.

The project has been presented in two different configurations: on the giant 16-screen video wall at the Southern Cross University learning centre on Lismore Campus, and as a 3-screen installation at the Alchemy Film and Moving Image Festival in Hawick, Scotland.

How do you define yourself and how do scientific issues come into play in your work?

I’m a media artist – and I guess that’s mainly because I’m drawn to images and sounds, and the incredible things that happen when you put them together. So for me the real potential of media art as a language is precisely its polyvocality, the fact that it makes intellectual, affective and sensuous appeals all at the same time. I think that’s one of the reasons why I’m interested in the art/science nexus, and using art to comment on something like the environmental crisis we face today, where anthropogenic climate change is one of the biggest challenges facing humanity and the planet. I see it as vital that science is able to make statements that are unequivocal, or as near to unequivocality as it can get, given the possibility of near consensus within a given scientific community. At the same time though, despite the incredible weight of the agreement of the majority of the scientific community that global warming is real and that it is caused by human activity, we have large swathes of the community who “believe” that the science is wrong, or who choose to remain “undecided". Which I see as both fascinaitng and problematic! Where does this “belief” come from and how can we address it? My sense is that art, in its capacity to speak persuasively and emotively and sensually, has enormous potential to address the issues that face us today, and to speak to audiences in ways that a factual or univocal address cannot. 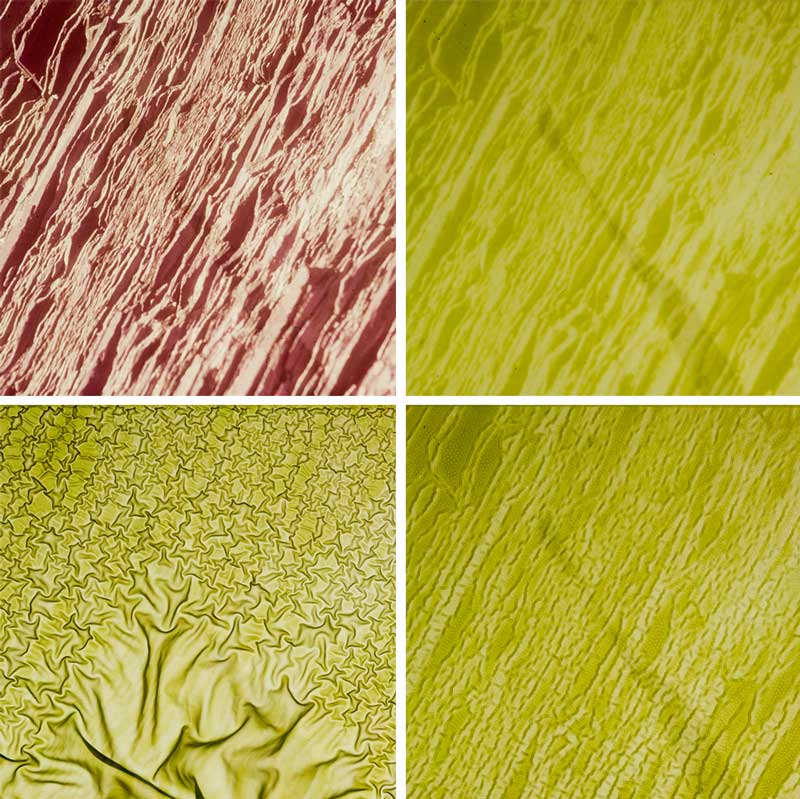 As a media artist, I’ve always had an interest in the “stuff” of media, the constitution of the medium, and how looking into the materiality of media can also be a kind of intellectual and social enquiry as well – for instance, an enquiry into the way photogrpahic media act as “external memories". So for a few years now I’ve been melting photographic film in the chemistry lab. I started out working with my own collection of photographs shot when I studied photography at high school, on a previous project “AgX” (http://www.graysoncooke.com/works/agx).  I collaborated with my colleague, environmental scientist Amanda Reichelt-Brushett, exploring the effects that different chemicals – sulphuric, nitric, acetic and hydrochloric acid, sodium hydroxide, sodium hypochlorite, hydrogen peroxide, copper suphate and many others – had on film.

This first project was an enquiry into personal media and personal memory. Old Growth was a chance to extrapolate out from that essentially, into the dissolution of images of environmental archives. I was interested in the transferability of the affective charge that I discovered when working with the disappearance of personal images: if that experience was shocking in some way for an audience, if they felt that loss of memory, the loss of the personal archive, then how would it feel to watch images of precious and ancient environments, the memory of the earth, disappear as well? 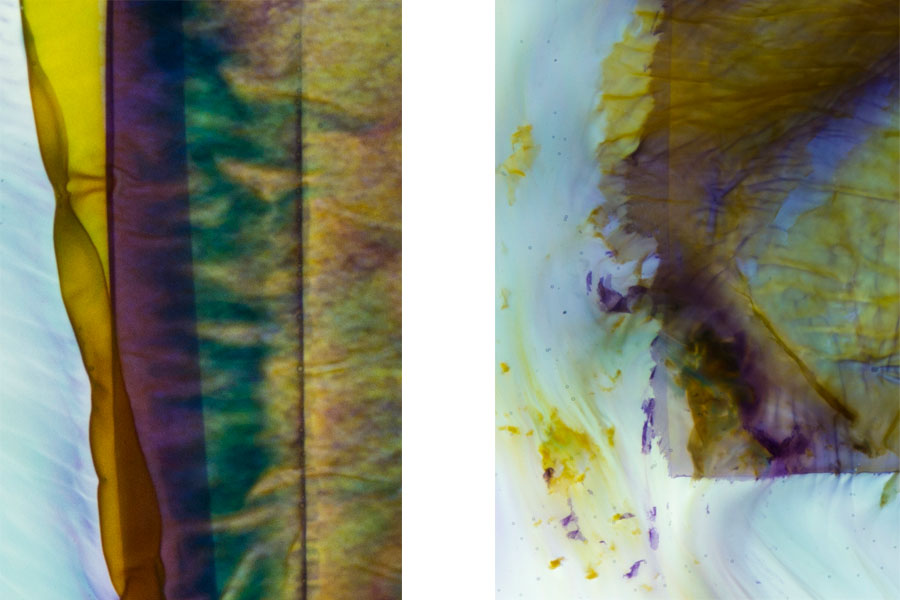 How do these three piece come together?

Each work operates as a media analogue for humanity’s effects on the environment; hydrochloric acid, for example, is used in fracking to dissolve fissures in sedimentary rock, and in this project it “fracks” the emulsion, seeking the “fissures” in the image where less silver is deposited on the celluloid.  “Bleach” uses sodium hypochlorite and nitric acid to reference ocean acidification and the resultant coral bleaching. Across the three works, the project conducts both an environmental critique and a material enquiry, by using photographic media and corrosive chemicals to “materialize” environmental degradation along different channels than the documentary record.

How does the presentation of these works influence the experience?

Before Old Growth I’d never really done work “in series” like this before. But when I conceived the project, and wanted to explore these different domains of sedimentary rock, coral reef and old growth forest, I got the sense that the elements of the project would be able to circulate and be re-combined in different ways for different exhibition and screening contexts. And, the time-lapse sequences are very high resolution, so re-purposing for videowall installation (https://vimeo.com/145454724) or multi-screen display wasn’t difficult.

Partly that’s just about maximising the distribution potential of the work. But it’s also about reaching different audiences and cross-pollinating the concepts behind the project, kind of constantly moving between the artistic context and the scientific and environmental context. Because let’s face it, the work is fairly ambiguous! It makes these quite beautiful images of melting film, but they’re related to, really, a series of worldwide catastrophes, just as they’re linked to massive economic forces in which we are all implicated.

The project’s not univocal in its message, it’s not designed solely as a polemic against environmental degradation, it has a concern also with media materiality and memory, with media archives and their relation to environmental archives. But I think the project has a strategy designed to draw attention to and reflect on these issues in a different way than a documentary film or scientific paper would. As I said earlier, it’s this polyvocality of art, and particularly media art, as a language, that allows for this; so Old Growth explores environmental degradation of course but it does this in this odd ambivalent region of the image, where we see images being torn apart by these incredible forces, but these forces aren’t bulldozers or drilling wells, they are ion exchange and electron transfer! 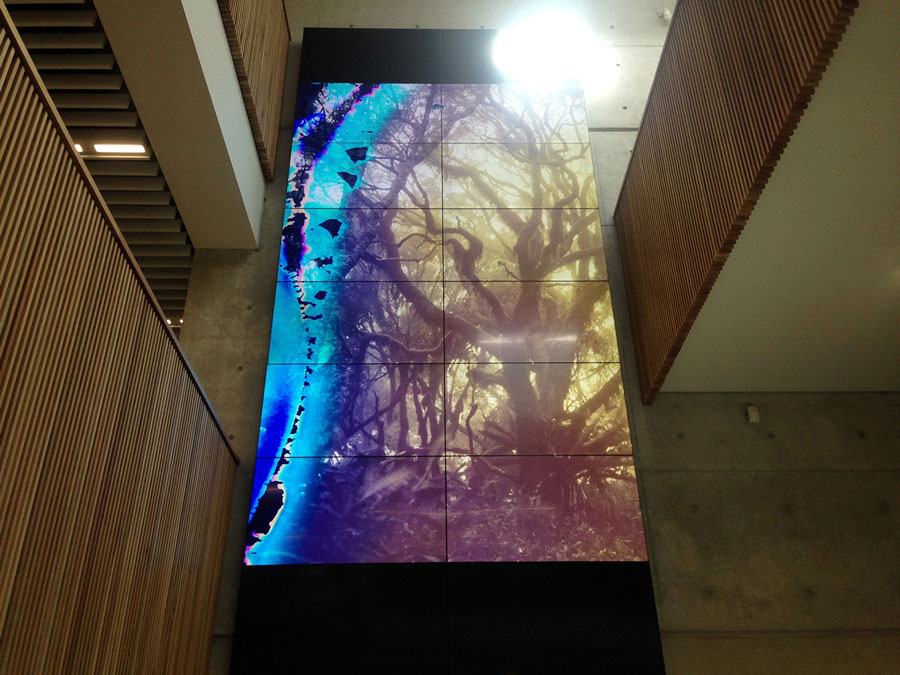 What is next for you?

The main thing I’ve been working on is a big project with my collaborator Dea Morgain, in partnership with the State Library of South Australia and the Adnyamathanha Traditional Lands Association. It’s called UNSETTLED and it is a kind of critique of settler-colonial nostalgia in the Flinders Ranges in South Australia. The project involves engagement with the Adnyamathanha people in the region around these incredible portraits of Adnyamathanha people shot in the 1930s, but also, the project involves bringing my photo-chemical degradation process to bear on colonial imagery, a kind of literal manifestation of the notion of “colonial ruin.” The project has been on exhibition in Adelaide and we’re seeking touring options at the moment. 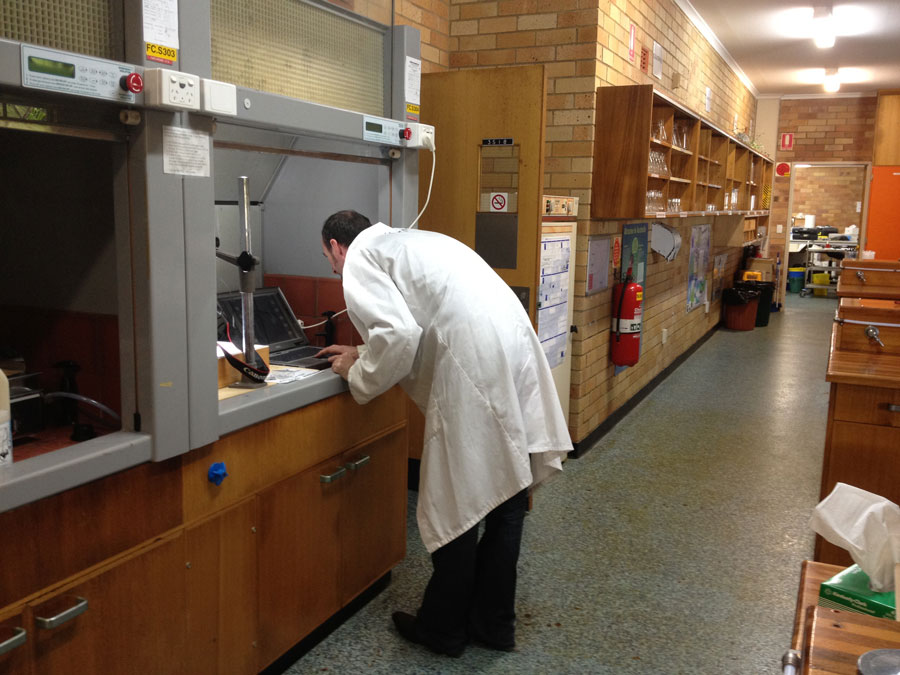 “The Artist In His Studio”. Photo: Fiona Fell.

Born in New Zealand and based in Australia, Grayson Cooke is an interdisciplinary scholar and media artist, Associate Professor of Media in the School of Arts and Social Sciences at Southern Cross University. Grayson has presented media art and live audio-visual performance works in Australia and internationally, and he has exhibited and performed in major international festivals such as the Japan Media Arts Festival, the WRO Media Art Biennale, VIDEOFORMES in France, and the Imagine Science Film Festival in New York. As a scholar he has published widely in academic journals, and he is also an associate editor for the scholarly journal “Transformations.” He holds an interdisciplinary PhD from Concordia University in Montreal.