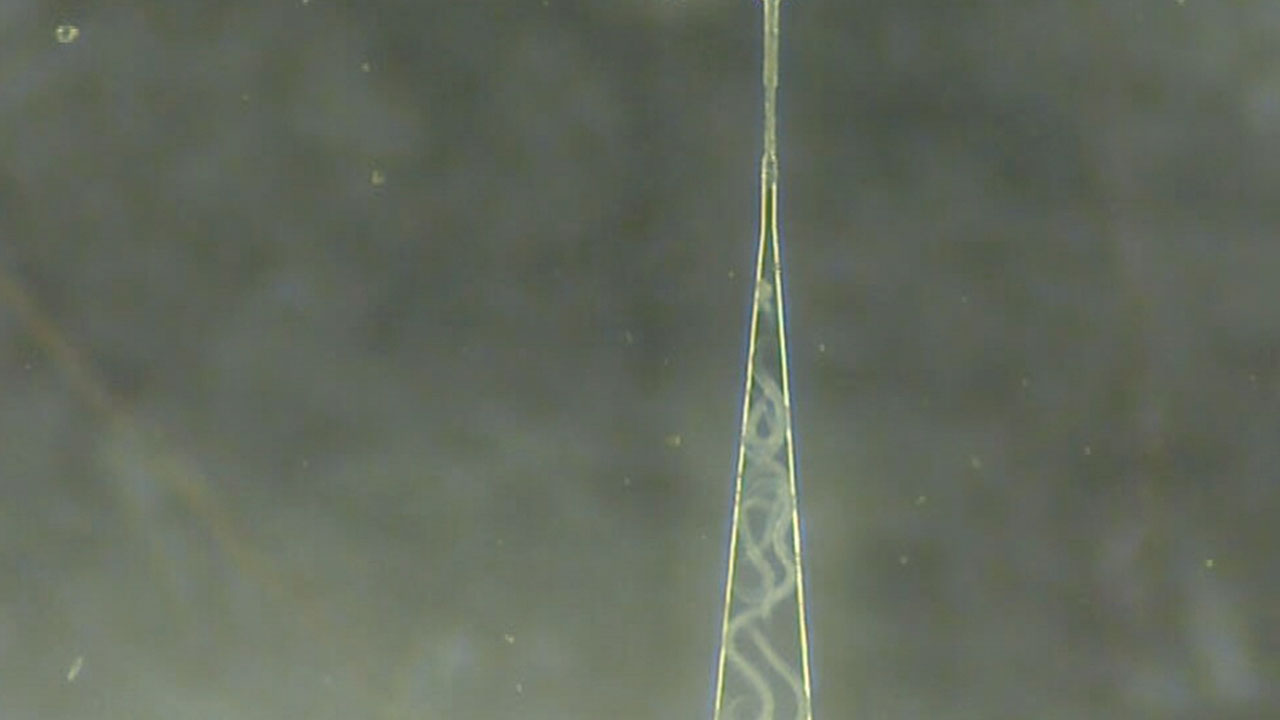 Squeezing a Worm through a Narrow Constriction 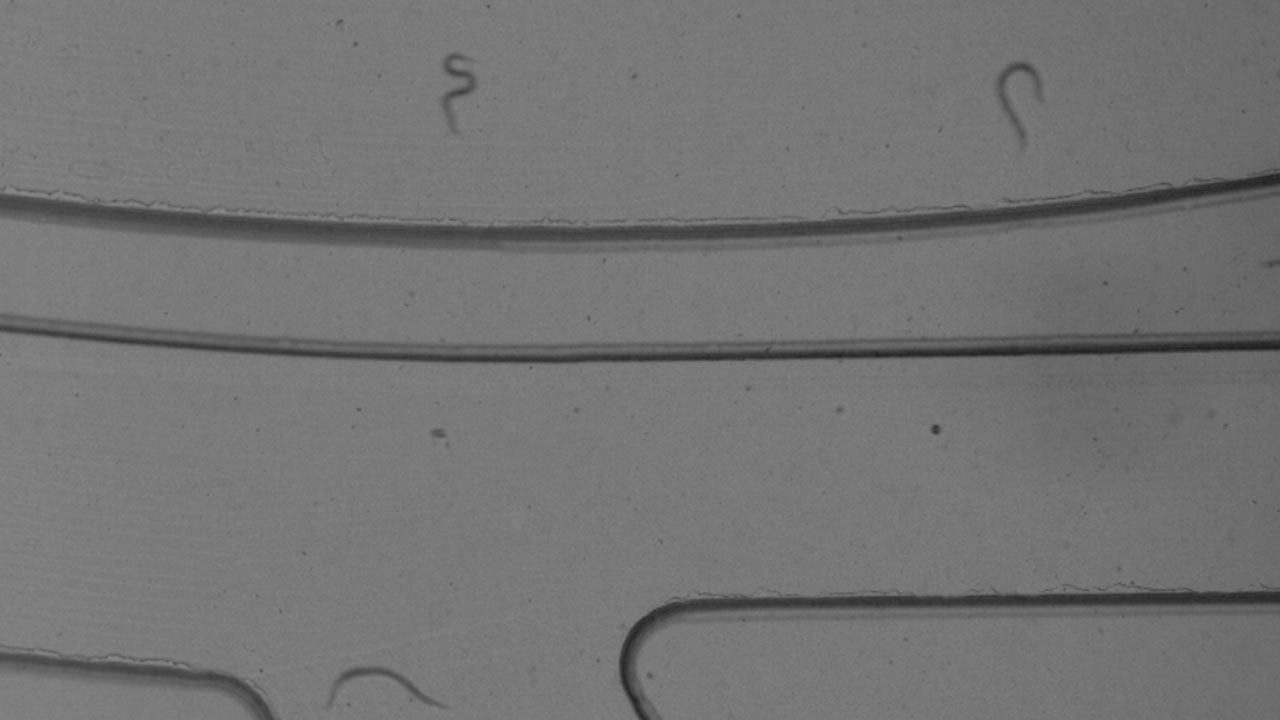 Separation of Eggs and Worms in a Spiral Chip 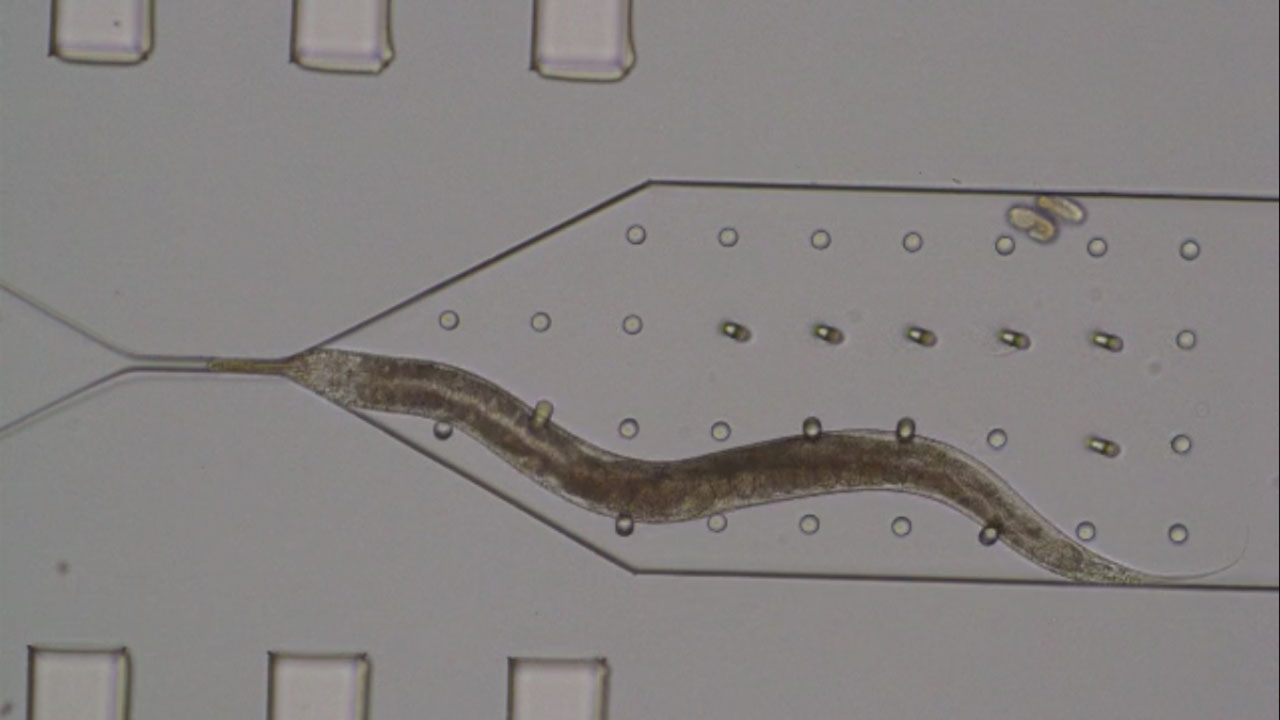 Explain how mechanical forces are acting everywhere even in the micro world of biology?

Do you still remember when you entered in a theme park for the first time and tried a roller coaster, a carousel and hit a punching ball? You felt your heart beating when traveling at 60 miles per hour and doing spectacular multiple loops. What forces are behind all this fun? The mechanical forces are acting on your body and let you feel the sensation.

At a much smaller length scale, in the realm of 1mm and below, small biological organisms such as C. elegans worms are exposed to the same law of physics and experience the inertial forces while traveling in a spiral channel at high speed as if riding on a carousel. They can feel and endure the same high G-forces like astronauts during a rocket launch. With their strong tails, they can hit on soft and tall micropillar structures like we hit a punching bag.

We can measure the amount of the deflection using an image analysis software and quantify their muscle strength. This small-scale theme park we built in a microfluidic chip is an ideal platform for us to study the mechanical properties and mechanobiology of worms in a precisely controlled microenvironment. It opens up new avenues to investigate several neuromuscular diseases using C. elegans model and measure the efficacy of drugs for their treatment in a quantitative way. Student at the microscope recording worms

Tell us about how video is important in your research?

My research interests are centered on building “Lab-on- a-Chip” devices to manipulate small biological objects such as biomolecules, cells and multicellular organisms and measure their properties in a quantitative and high-throughput manner.

Making a video is essential in my research to quantify the short-time scale, dynamic processes of living objects confined in the small artificial “microenvironment”. Through science filmmaking, I would like to convey the beauty of the micro-and nano-world to the general public and get the younger generation excited for STEM in general.

The first video clip shows a C. elegans worm bending soft high-aspect-ratio micropilars with its tail. By measuring the deflection of each micropillar structure, we can quantify the muscle force of the worm. The second video clip taken with a high-speed camera shows a filter-less separation of C. elegans eggs from L4 using high inertial forces only. As you can see, the eggs are sorted out from the upper outlet while the L4 worms are sorted out from the lower outlet. During this sorting process in a spiral channel at a flow speed of 1.6 m/s, the worms can experience up to ~10g forces. In comparison, an astronaut experiences a maximum force of 3g during a rocket launch. Separation of Eggs and Worms in a Spiral Chip

The third video clip shows a mechanical squeezing of C. elegans through a narrow constriction (25 um in width). We are trying to use this chip for biophysical phenotyping (such as measuring deformability) as well as dispensing of a single worm (eventually cell) in a high-throughput drug screening machine. Squeezing of C. elegans through a narrow constriction

Rafael Song received his B.S., M.S., and Ph.D. all in mechanical engineering from RWTH Aachen University of Technology, Germany and worked at the Korea Institute of Science and Technology (KIST) as a Senior Research Scientist. He joined the Micro/Nanofluidic BioMEMS Group in the Department of Electrical Engineering and Computer Science at MIT as a postdoctoral fellow and then as a research Scientist. He joined NYUAD in August 2012. Since then, he has been spearheading the research activities in the Micro- and Nanoscale Bioengineering Group within the Division of Engineering. He has received the NYU Whitehead Fellowship for Junior Faculty in Biomedical and Biological Sciences in 2014 and the NYU Research Challenge Fund in 2017.