Cyber Nations: An Interview with the director of .TV 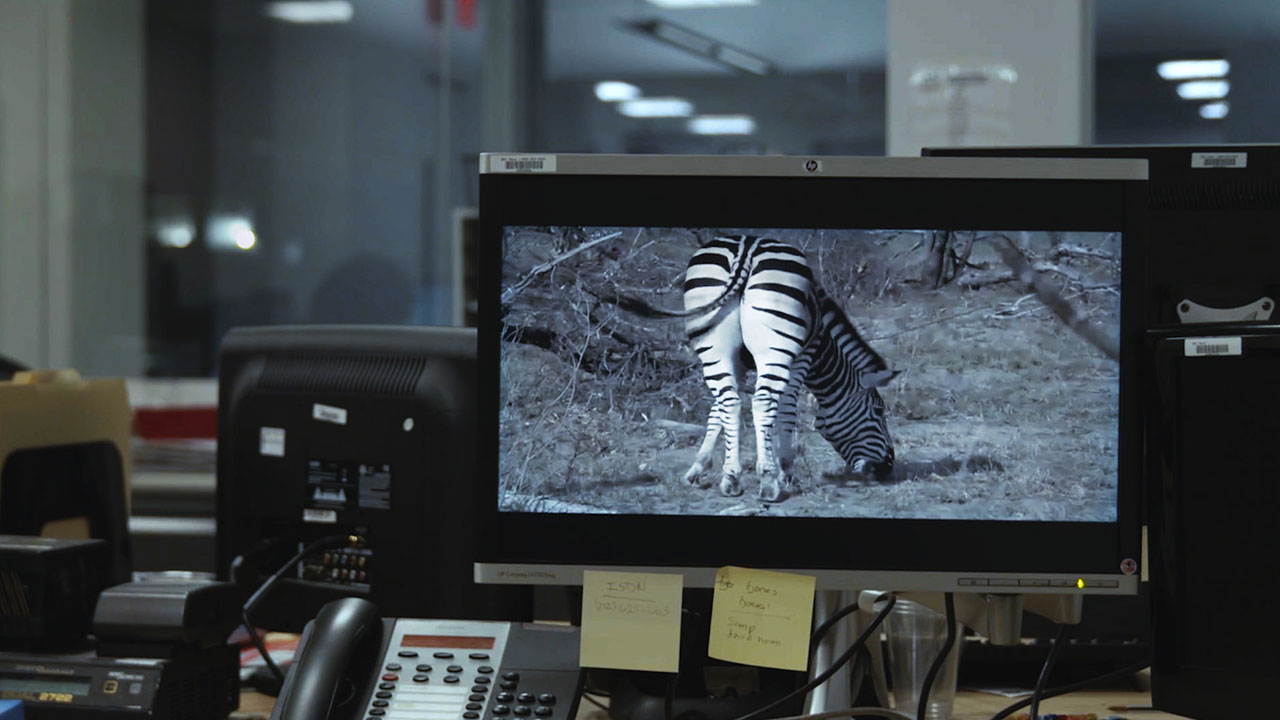 The current issue of Labocine features the enthralling trance documentary .TV, created by experimental filmmaker Anthony Svatek. His piece weaves together a futuristic apocalypse of visual voices using only imagery from the present, a portrait of the tiny 9-island country of Tuvalu out in the middle of the Pacific. This independent nation exists in a vast expanse somewhere between Hawaii and the broad range neighborhood of Papua New Guinea, Australia, and New Zealand. The closest island one might recognize is Fiji, about a 2.5 hour flight away. Tuvalu comes as exotic to most, who will probably never visit or live there, which is why the issue of its oncoming disappearance is not given much value in the spectrum of current global dilemmas. Because of rising sea levels and increased salinity in their environment, the country can barely self-sustain and may be entirely underwater in the coming decades.

While it physically goes under, the country is able to economically survive due to most reliable source of income, the international consumption of website domains. Since the internet's start, each country was given possession over a URL extension (.ca for Canada, .au for Australia), and Tuvalu's '.tv' became massively popular as a genre of sites that serve as a video or livestream host. Svatek weaves together different .tv sites with imagery of Tuvalu, narrated by a spirit in the future warning of Tuvalu's demise. The result is a hauntingly gorgeous glide through this country's existence exactly how the vast majority of us see it: otherworldly.

I wanted to have a conversation with Anthony while he was far from his own mind and worries at a month-long artist's residency in the quiet and tree-filled Vermont, United States. There he was sheltering himself from the torrent of global politics and able to focus on how to convey issues of concern in honest and personal forms.

AH: Maybe you could talk a little bit about process of making .TV...

AS: I had the idea for .TV when I was working on a different project about climate refugees, and sort of what that term means, because it’s not an official term. There’s climate-based displacement, like environmental disasters, but that’s not an officially recognized reason to seek asylum. I came upon Tuvalu and was reading about how the islands are sinking as the sea levels rise. Then I read that the marketing of .tv domains was one of their main economic resources, and the idea grew from there. I felt there was some connection between all these .tv websites streaming video content and this remote, obscure island that’s so far away from people’s consciousness. There was a very direct correlation between what’s relatable to people like us, living in an urban technologized environment, and this abstract concept of climate change, let alone this small, paradisal island nation disappearing. I thought if people can’t grasp the implications of Tuvalu ceasing to exist, they would be able to relate to the web side of the story, because our everyday online connectivity is what has become second nature to us. And I knew I didn’t want to travel there, because it was all about seeing this story unfold from a distance, and also “television” means “viewing from afar.” 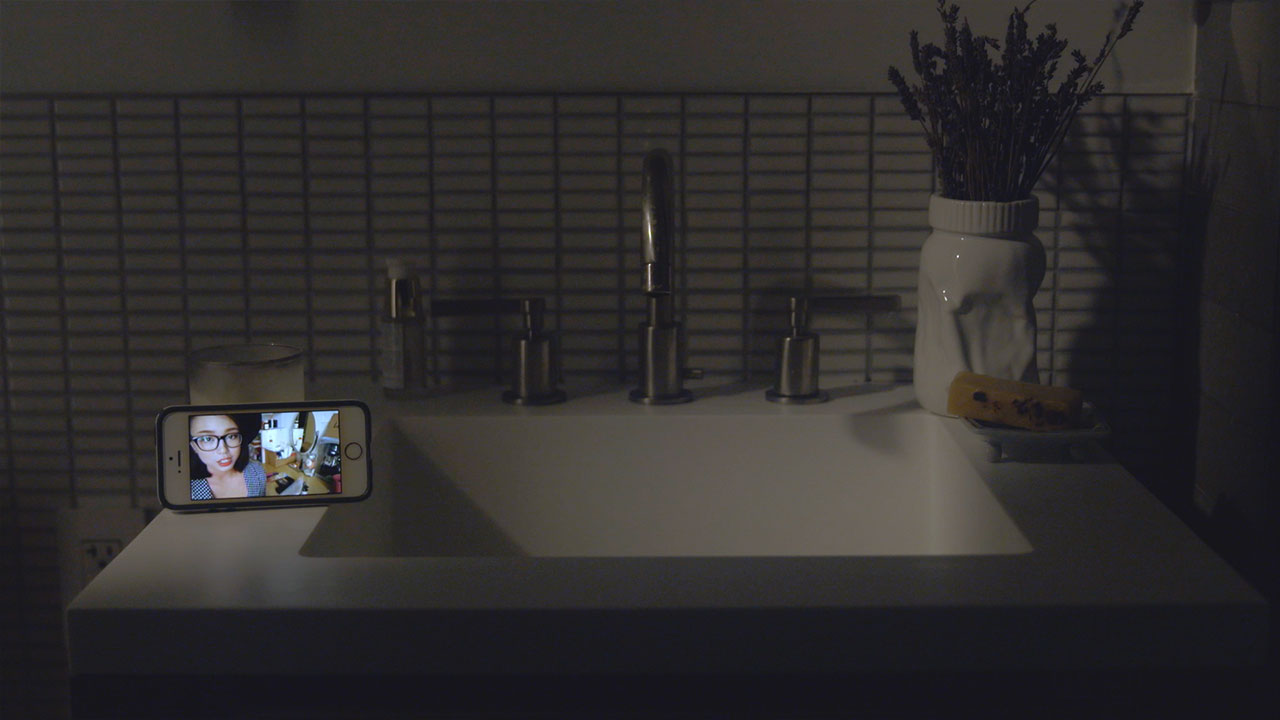 AH: So the footage of Tuvalu was shot by your DP...?

AS: No, that was all found footage. While I was researching I found tourist videos of Tuvalu on YouTube. A French globetrotter named Andolfo Ludovic uploads videos from all over the world as he travels to every country. There were about fifteen unedited videos of Tuvalu and I watched them all. I got in touch and told him what I was trying to do, and what the concept of the film was, and he was generous enough to allow me to use the footage. We’ve never met in person, and we’re still on one long email chain, two years later.

AH: And the narrator who leaves voicemails from the future, can you talk about who that was and how you came up with the voice for that?

AS: I wanted to do an interview with someone at the company that actually runs “.tv,” a marketing firm based in Boston. They sell .tv domains around the world, and they give a share of about 5% of the proceeds to Tuvalu’s government, so there’s a huge discrepancy there. But nobody there wanted to talk to me about that. So I decided to add fictional elements and set it in the future, because it is such a sci fi futuristic scenario, and I knew that it would be easier to convey the story because it’s more imaginable that way. And I thought that it worked because when we think about climate change and sea level rise, it’s still all in our imagination, very future-oriented, and not happening in the present. So I contacted a bunch of Tuvaluan organizations, and I happened to meet Tiueli Papau from New Zealand who’s Tuvaluan but also never visited, and we collaborated on the voicemail narration together. 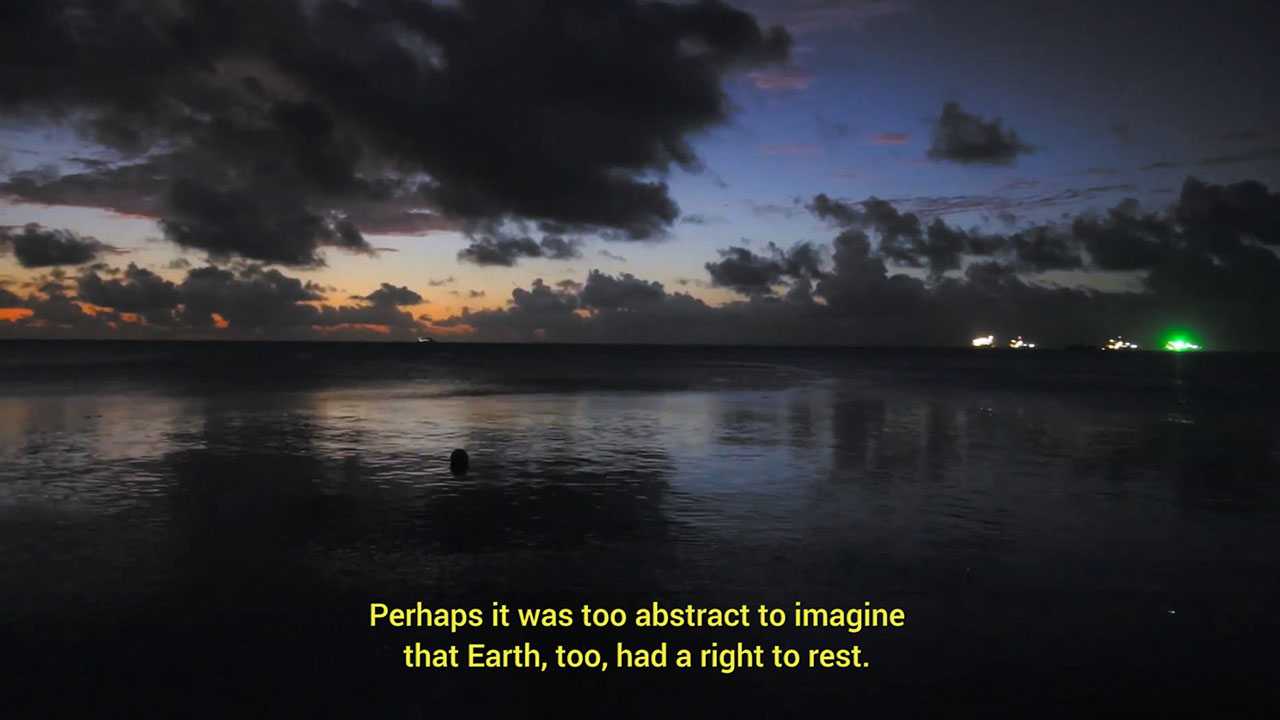 AH: So as far as the use of .tv, we might think of it as like an old, maybe a ‘90s, early 2000s usage, but these sites that you found were still active. They’re used, they’re updated, they’re live streaming. How popular do you think they are from country to country?”

AS: I looked up the most popular .tv websites, and I would say in the States there were three or four, and one popular one was a gamer site where you could watch people play shooter games. But in the U.S. it seemed it’s probably not as popular as it used to be, but it’s still very viable throughout the world, in different locations. And that viability was very much discussed in online forums. On domain industry blogs I saw all these conversations about Tuvalu disappearing and the repercussions it would have for .tv websites, and a lot of debates say that once Tuvalu is off the map, there will be no question about .tv ever meaning anything else but “television.” There were even comments about Tuvalu being a trendsetter by becoming the world’s first “virtual country”. I thought it was so frightening how that future scenario seemed much more graspable, and even exciting to some, than making sure we do everything we can in the present to avoid that from happening.

AH: And it’s kind of hard to not see those two as directly related, the drowning of the country in relation to the use and popularity of .tv.

AS: Yeah, it’s about what grabs our attention most? What excites us about the future and what frightens us? When we think of the future we think of everything being in the cloud, being intangible, this infrastructure without a body, so the physical world around us is really sort of obsolete. That’s how I feel when I’m on the computer or watch tv, I feel my consciousness floating a few inches above my head, I have a hard time grounding myself in the physical present, where I am. The more I work in that world, the more content I produce in that world, the less that location where I’m doing that work seems to matter. And that scares me a lot, and I wanted to express that in .TV. 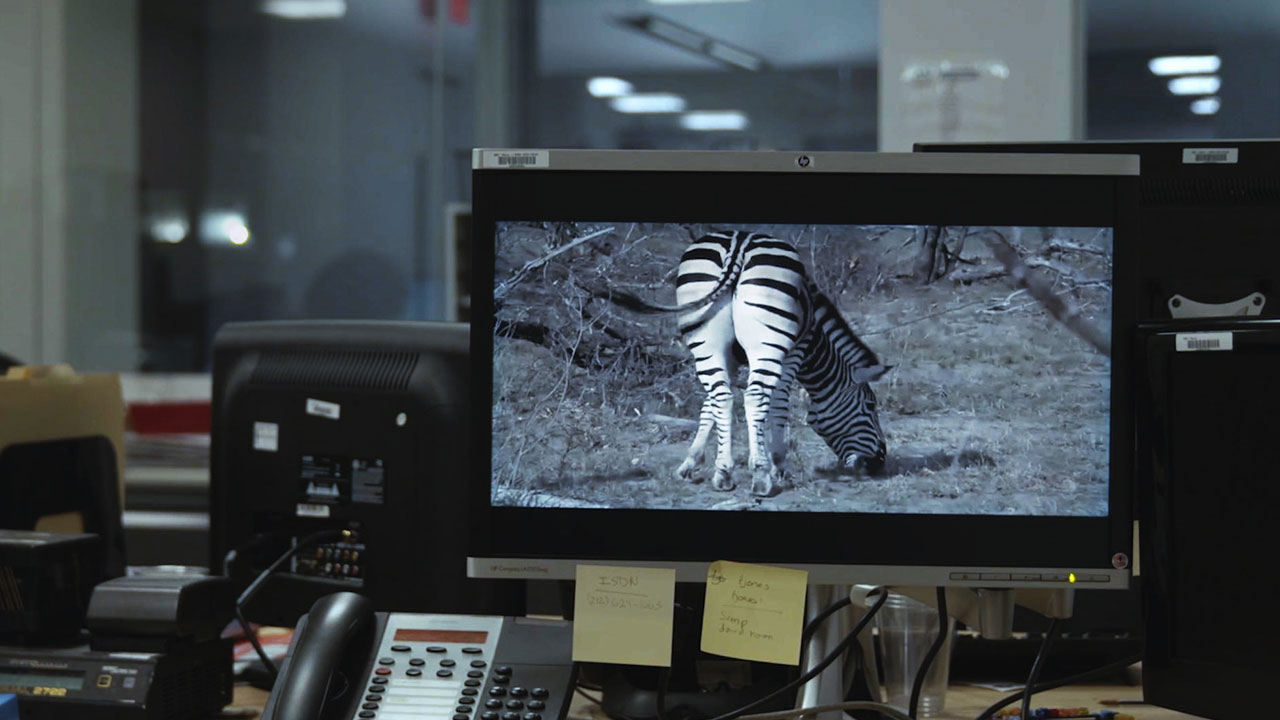 AS: Not much. Nobody talked about that. I started to work on the project before the election, and people asked me what the film was about and when I told them, they said, ‘Oh, that’s interesting…” and then after the election I heard them say, “Wow, this is so relevant, your film,” and it got me frustrated. As if this stuff wasn’t an issue before the election. I wasn’t trying to make a relevant film at all, I try to stay away from these hot issue filmmaking modes where we create content because we know it’s what people want to see. I’d like to think I make films about this stuff because I really care about it. And as more people around the globe live urban lives, I want to come up with different, maybe surprising ways to show its consequences on our understanding of our relationship with the natural world.

AH: One thing I was thinking as you were talking about that is, by creating films nowadays, aren’t we kind of setting ourselves up to be a hot topic for a moment and to be sort of just forgotten? We used to think it was a great way to communicate a message, and now it’s this era of just mass consumption, everyone’s in that mentality of viewing from afar just so that they can turn it off and forget about it. Those people who spoke to you thought it was a trend because that’s their perception.

AS: Everybody wants to see themselves represented and their point of view represented in the mainstream, and I think that’s important, but it nonetheless still serves an industry. We all know that if there was mainstream content made about climate change, that it would be given more attention. But it’s not in the mainstream because it’s sort of this faceless idea that everybody’s affected by, no matter who they are or what position they hold within the stratified society. You can’t really make good entertainment out of it.

There’s a system in place where HBO makes a ton of money off these woke shows, and they’re being sold to us as this very important, progressive thing, and while it is, it’s still just entertainment. But with environmental issues that hasn’t happened yet, because I think everybody knows when you think about these issues really deeply, it has much larger repercussions. It would imply that we can’t live the way we’re living. And anybody, not just privileged people, anybody. And that’s not very sellable to a mass audience expecting to be entertained. But I also think that there is some power there, I think that there’s room to consider why the profit-driven entertainment industry, and capitalism in general, is shying away from selling us climate change. I want to explore that because it gives me a sense of hope. 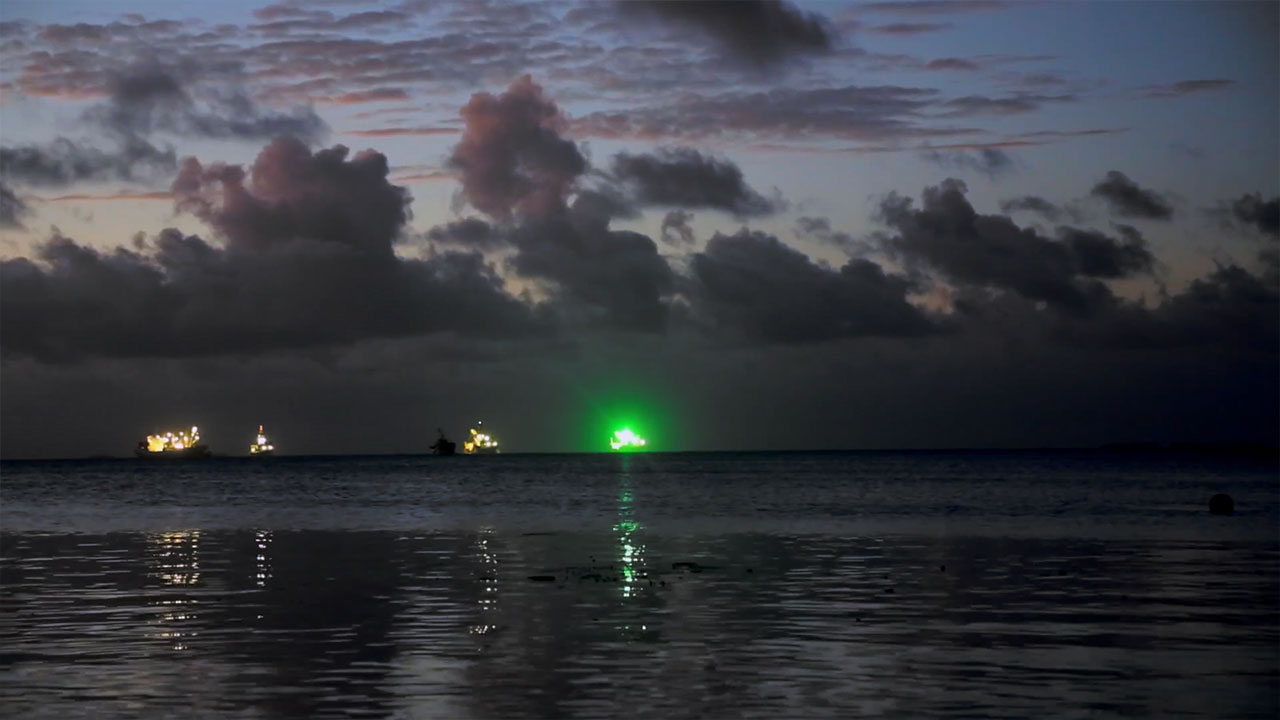 AH: It’s so depressing, and we’re in an economic and job structure, this culture that we live in, where the majority of the population can’t do anything because they are not in power and they aren’t given any sort of scientific wherewithal to create these changes, so it’s really just set up to be an impossibility for the everyday person.

AS: As someone making experimental docs, my work won’t reach a mass audience, but rather a particular group. If you were to ask them about their stance on the environment and climate change, many would answer they fully support measures to protect the planet and minimize our impact. But often their lifestyles don’t add up to this pledge. I don’t blame them, I’m doing the same thing, and it seems like there are so few alternatives. I sometimes say that .TV tries not to preach to the choir, but instead makes its members question the songs they’re made to sing. These days we see beautiful nature imagery all around us, on our phone backgrounds, or on social media, and so on, and that lets us think we care about it simply because we’re looking at it and say, “that’s so pretty”. Being so lucky to get to stay at this residency in the middle of Indian summer, I try not to be cynical as I start a new project, and I realize that means I’ll have to make it a more personal film and be honest about my own frustrating and romanticized relationship with the environment. I hope that’s a place to start. 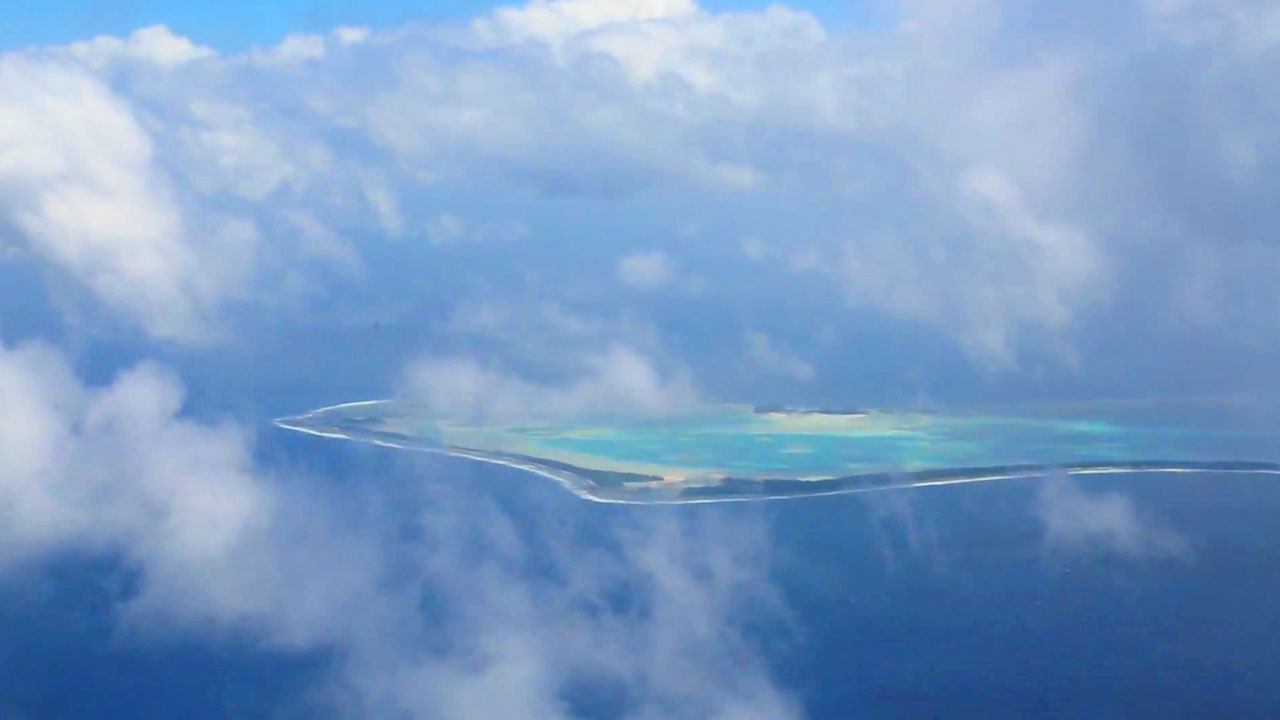