A Chance to Climb Mountains 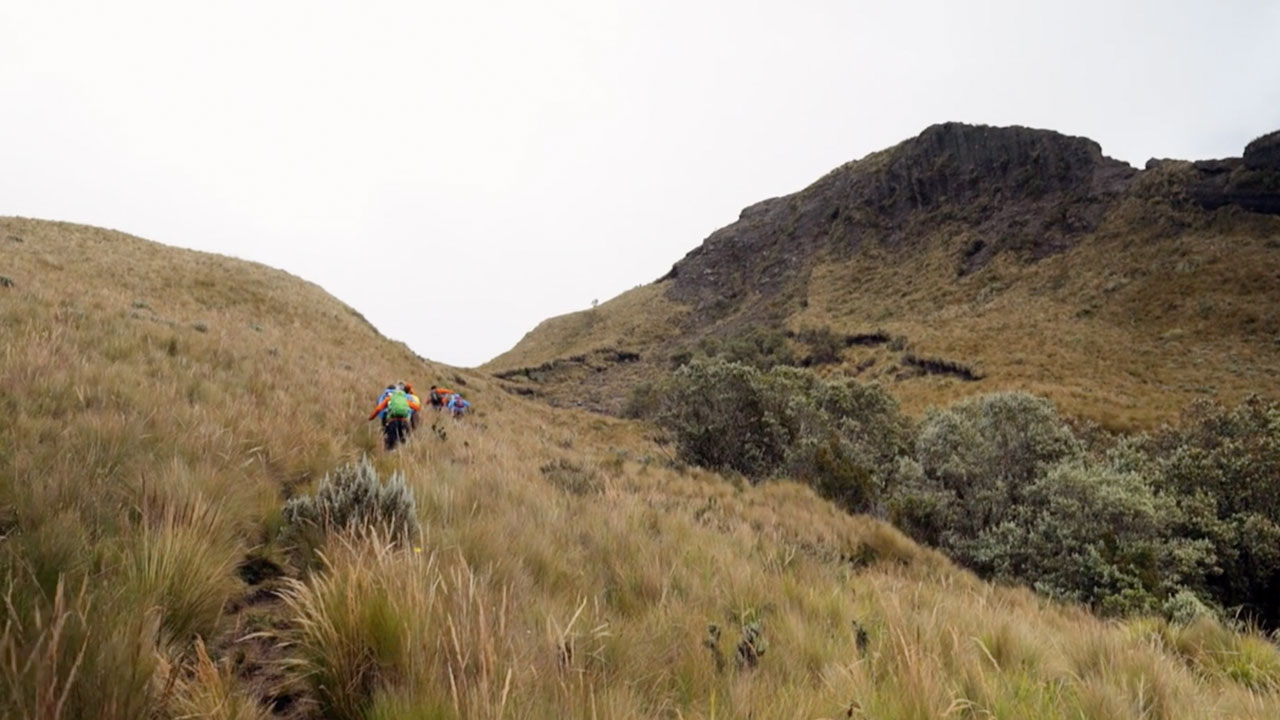 July 26, 2015 marked the 25th Anniversary of the Americans with Disabilities Act. To commemorate this important date, the Range of Motion Project proposed an ambitious plan to the US Embassy in Quito, Ecuador- an expedition to the top of the only snow covered place on the equator. The 19,000 ft summit of Volcano Cayambe.

The team was unusual. Ecuadorians and Americans, most with no prior climbing experience. Half of the team members were amputees using the most advanced prosthetic limb technology available. It would be led by the most elite amputee climber in the world.

‘IN EXTREMITY’ is the story of the persistence of the human spirit against all odds. Like the athletes it highlights, the film challenges our fundamental perceptions of disability, and inspires everyone to seek out and unlock their own inner human potential. The Climbing for ROMP team climbed four volcanos in order to acclimate to the altitude of the final climb, Cayambe. Photo: Jake Farmer

Tell us a bit about yourself.

I was born with a congenital defect called pseudoarthrosis of the tibia and fibula. My foot was intact but the bones near my ankle were not properly fused.  My left foot was amputated when I was a year and a half old.  I started using a prosthesis at the age of two.  I’ve been surrounded by the world of prosthetics for as long as I can remember.  Prosthetic technology evolved a lot during my childhood and adolescence in the 80s and 90s.  I was inspired to pursue a career in prosthetics and received my degree as a prosthetist from Northwestern University after studying Biology at the University of Illinois.  While studying prosthetics I became acutely aware of a frightening fact.  Most amputees in the world cannot access prosthetic care and are disabled not because they are missing a limb but rather because they are missing a prosthesis.  I volunteered with a prosthetic program in Haiti upon completing my residency and everything changed.  I decided to dedicate my professional life to provide prosthetic care to those most in need. I co-founded the non-profit organization Range Of Motion Project (ROMP) in 2005 and moved to Guatemala in 2006. I’ve been living and working in Latin America for the past 11 years. A prosthesis is a known solution to a common problem - amputation. Yet, the majority of amputees around the world cannot access prosthetic care. ROMP envisions a world where every amputee can access the best quality prosthetic care empowering them to lead happier, healthier and more productive lives. Creating a prosthesis is as much an artistic endeavor as it is a scientific one. I hand-craft custom prosthetic limbs intended to improve my patients’ quality of life while helping them to achieve their personal goals. My work, as a prosthetist, is a catalyst for change and I love watching my patients discover new-found mobility with their prosthesis. The friends and patients who appear in In Extremity are great examples of the beauty of prosthetic rehabilitation. The climbers in this film demonstrate the world of possibilities when we combine the dreams, desires and drive of the individual with prosthetic technology and proper training. I hope that anyone who watches In Extremity will be inspired to use their own mobility to help ROMP increase access to prosthetic care for all people living with amputation.

What are the current technological advances in prosthetic design?

The international non-profit organization Range Of Motion Project (ROMP) is leveraging a variety of prosthetic and manufacturing technologies in order to provide care to some of the most vulnerable people living with amputation in our hemisphere. ROMP’s mission is to provide prosthetic care and rehabilitation services to people with amputations who cannot access these services. Mass produced, low-cost prosthetic solutions do exist but ROMP aims to provide all amputees with the most medically appropriate device in order to empower them to achieve their dreams (like climbing mountains) and lead more fulfilled lives. Oftentimes, for young and healthy people living with limb-loss, very advanced prosthetic technology is the most medically appropriate. Our elite mountaineers would struggle to climb if they w/ere not wearing prosthetic technologies like microprocessor controlled knees or training with carbon fiber running feet. Better, lighter and stronger materials allow ROMP to deliver devices specifically designed to meet the needs of our patients. However, this approach comes with trade-offs. One running foot might cost as much as several simpler prosthetic feet. We are forced to make a choice between treating one person with the best quality prostheses versus treating multiple people with more economical systems. ROMP operates within a limited budget which means that sometimes we are unable to afford the ideal technology for one of our patients. This is where our US-based prosthetic recycling initiative as well as innovative manufacturing technologies are helping ROMP achieve its mission. Our Components for a Cause Network consists of dozens of private prosthetic clinics in the US who receive, process and donate good condition, gently used prostheses to ROMP. We strip useful and oftentimes high-technology components, refurbish them and re-apply them on our patients in Ecuador and Guatemala. ROMP also manages 3D printer laboratories in Ecuador and Guatemala where we develop and manufacture low-cost/high-technology solutions for our patients. ROMP understands that many amputees in the world are “disabled” not because they are missing a limb but rather because they are missing a prosthesis. Poor amputees deserve much more than poor prosthetic technology. A prosthesis is a tool for personal empowerment and ROMP believes that each and every amputee should be wearing prosthetic technology that is best suited to their situation and rehabilitation goals. Prosthesis repair in the Iliniza refuge before we climbed the next day. Photo: Jake Farmer

When did you start planning this expedition in Ecuador?

In March 2015 ROMP met with the US Embassy in Ecuador and proposed the expedition as an event to celebrate the 25th Anniversary of the signing of the Americans with Disabilities Act (ADA). The US State Department approved the proposal by April and our team was assembled and began training shortly thereafter. None of the Ecuadorian amputees on the team had ever done mountaineering. Training was intense and disciplined. Each amputee athlete trained for strength and cardiac endurance during the week and every other weekend we were out climbing and hiking. One of my patients in Ecuador, Santiago Quintero, is a professional mountaineer and he is also a bilateral amputee. He led the expedition and provided a training plan for the team. Many of the non-amputee climbers on the team are also experienced athletes and their presence on training excursions w(as) invaluable to the success of the expedition. From April to July we trained while I assembled a group of corporate sponsors who supported the expedition with gear and supplies. The Climbing for ROMP team outside of the Cayambe mountain hut hours before the summit attempt.​ Photo: Jake Farmer

How did you decide to make this film with Jake Farmer?

Producing the film was always a part of original proposal to the US Embassy. July 2015 marked the 25th Anniversary of the signing of the ADA. Congress had approved a budget for US Embassies to use in their countries in order to produce events commemorating the legislation. Our goal was to produce a film that we would share with the Ecuadorian community in order to raise awareness about the ADA and global need for prosthetics and we hoped that we would inspire amputees to test their physical limits through sport and mountaineering. Jake Farmer produced a promotional video and short documentary piece for ROMP a year earlier. Jake was familiar with and passionate about the ROMP mission. He had no prior experience shooting climbing films so while we prepared physically for the expedition Jake was training to climb for the first time in his life while preparing the technical and production plan for the shoot. Which organizations supported this expedition?

The US government was the primary expedition sponsor providing funds for travel, gear, supplies, guides, marketing, and film production. However, they financed a team about half the size of what it ended up becoming. Other sponsors helped ROMP grow the team and reach a broader audience. Local Ecuadorian companies sponsored with in-kind prosthetic and food supplies, logistics and gear including: Tatoo Adventure Gear, Cumbre Tours (Karl Egloff), Cafe Velez, Pacari Chocolates, Krupa O&P, Proteus Centro de Protesis, Ossur, and Buen Trip Hub. In follow-up to the expedition GoPro selected ROMP as one of its GoPro for a Cause partners. At the end of 2016 GoPro released three short videos about ROMP’s work in Guatemala and made a $50K donation to ROMP.

How does a film enable to communicate your message and reach a larger audience?

Filmmaking is critically important to ROMP. Film allows ROMP to give our patients a powerful platform and voice through which they become far better advocates for their own future than we could ever be. In Extremity shows the viewer the importance of quality prosthetic technology in the lives of our amputee climbers and serves as a reminder that there are many more people in the world who need the same type of device. The film has also helped ROMP to consolidate a community of supporters who, every year, head to the mountains to Climb for ROMP and fundraise for the cause. 2017 marks the 3rd edition of Climbing for ROMP since its inception during the 2015 Ecuador expedition. Hundreds of people will climb in solidarity with the elite team which will be climbing in Ecuador yet again. In Extremity like the GoPro for a Cause films and the other pieces we’ve produced help to legitimize our cause and connect with a broader audience. David Krupa was born in Chicago with a congenital defect that resulted in the amputation of his left foot when he was one and a half years old. He has depended on prosthetic technology his entire life. He is an American Board Certified prosthetist and co-founder of the Range Of Motion Project (ROMP), an NGO that has provided prosthetic limbs to more than 2,800 people living with amputation in the Western Hemisphere. Through his work in ROMP and in private sector endeavors in Ecuador, David has helped to strengthen and develop innovative health systems that serve people with amputation in Guatemala, Ecuador, Mexico and the USA. Mobility is one of the most important aspects of David’s life. David believes that mobility is critical to humans’ search for meaning. This belief motivates David to help to empower vulnerable people living with amputation. The American Academy of Orthotists and Prosthetists presented David with the Mohamid Amin Award for Humanitarian Service in 2007. In 2013, he received the Charles C. Stewart Young Humanitarian Award from the University of Illinois at Urbana-Champaign. In 2015 he was named recipient of the Henry Viscardi Achievement Award which  recognizes contributions to society made by leaders in the disability community.