This interview was conducted by Christina Lu.

Under the glare of his This interview was conducted by Christina Lu.

Under the glare of his The Secret Garden: Evolutions of Virtual Plants & Corals | Labocine 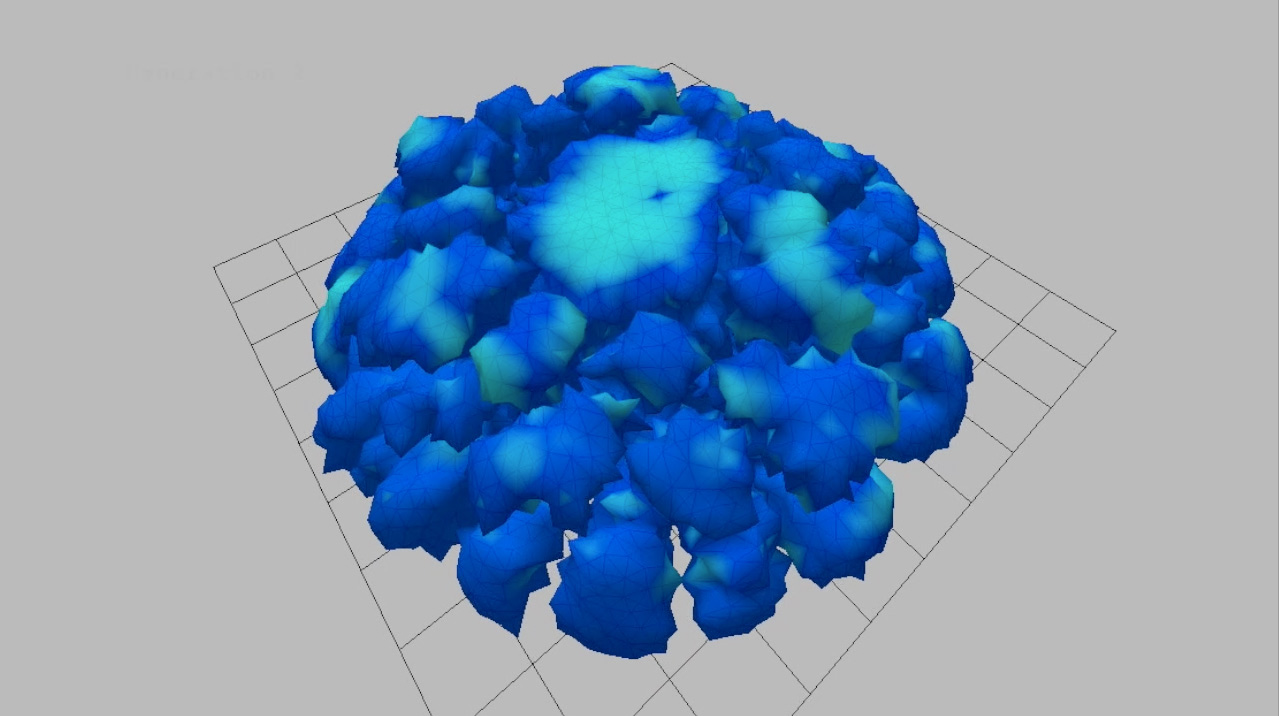 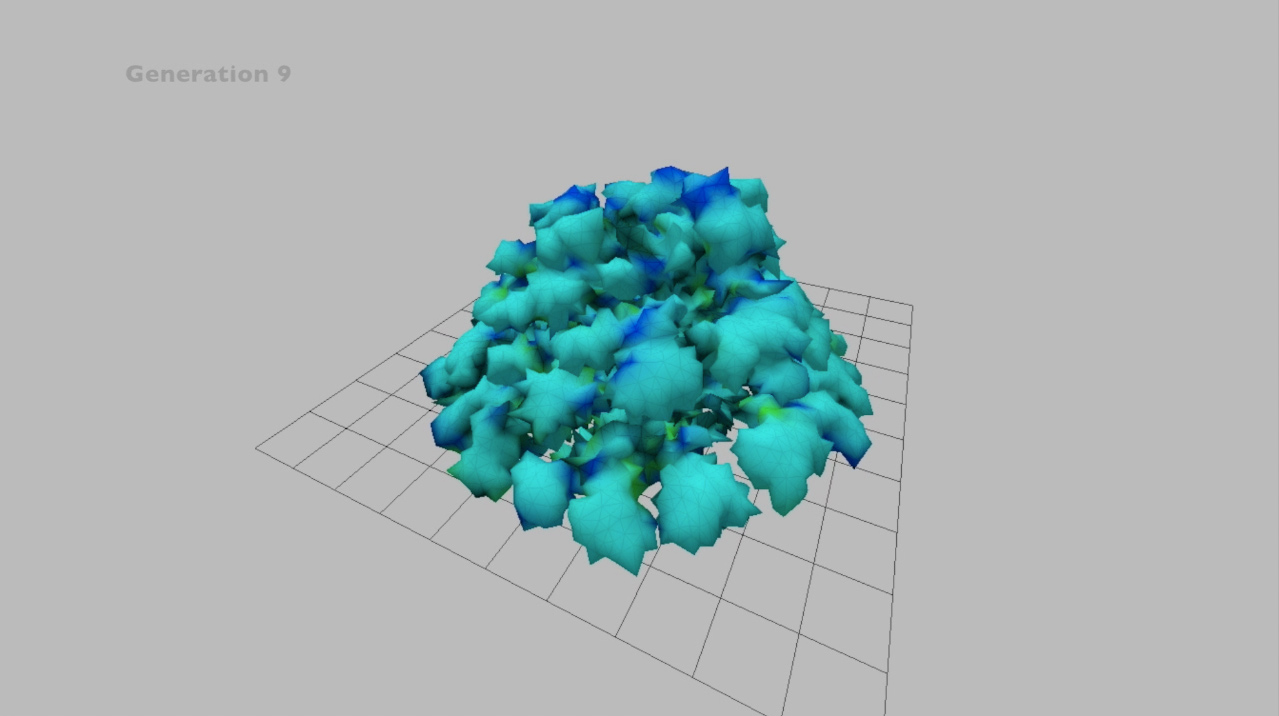 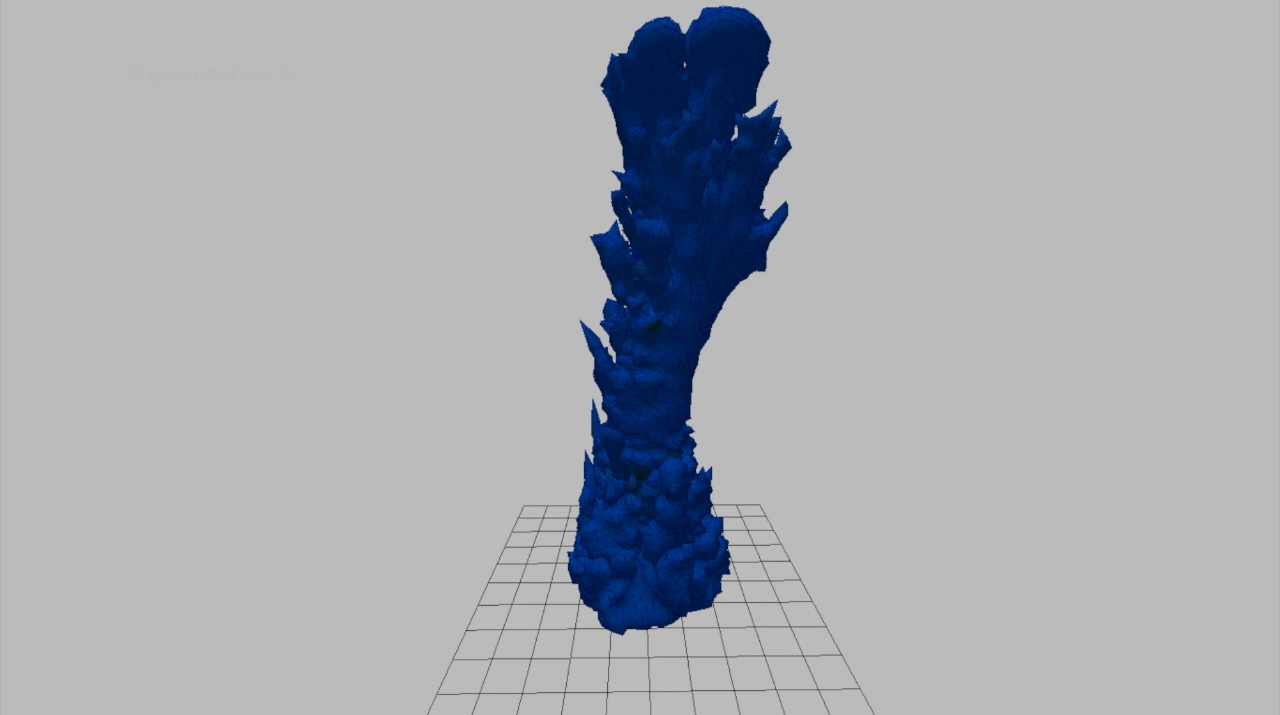 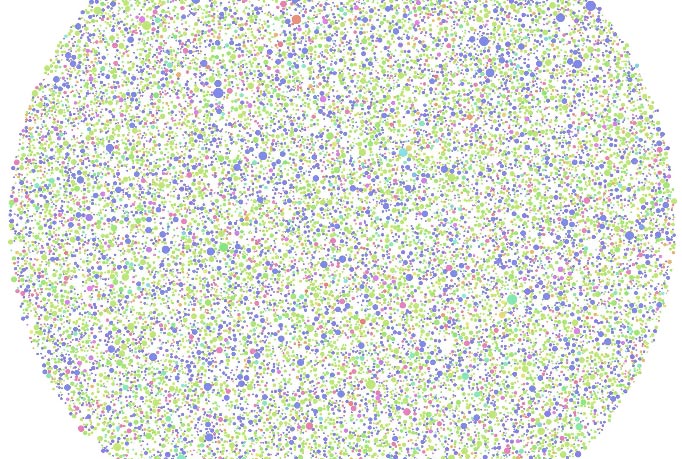 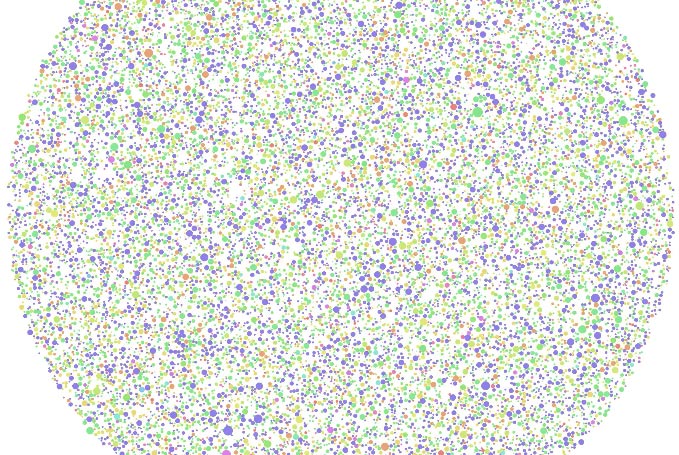 This interview was conducted by Christina Lu.

Under the glare of his self-made lamps, Joel Simon rewards himself with “small” indulgences, like setting aside time to recreationally model plants and ecosystems on his computer. His latest ecology project, an extension of several conversations with a coworker at The Rockefeller University, pits species against one another in a biological arms race in an attempt to abstract out the nature of the relationship between levels of biodiversity and arbitrary environmental factors. Using Python and C, he pushes the bounds of generative art, supplementing the engineering of an algorithmic art partner with immersion in the field of ecology. The result takes the form of recorded simulations of a virtual world, where digital Dipping Dots™ meant to represent living organisms melt and materialize hypnotically before our eyes.

How would you describe your latest project, ecology modeling?

It’s basically plant, multi-agent modeling for plants, and it’s a very simple abstract representation where each genome has three properties: how much energy it spends growing versus competing versus spreading seeds. It also has a few arbitrary competitive attributes. I model the plants in the simulation and follow them over time. For each time step, each plant will compete with the others around it. It’ll grow, collect more resources, spread its seeds, and you can see what happens. For a lot of them, I ran the model then followed it until a stable pattern emerged.

Your foray into ecology started with virtual plant modeling. Now, in a way, you have “evolved” to modeling corals. Can you describe this new iteration?

The virtual corals are also an attempt to work with the beauty of emergence and complexity. A coral is a collective of polyps who work together by depositing calcium. What’s happening in the models is a genetic algorithm is evolving a single neural network which controls the behaviour of each polyp in the coral. For instance, a polyp knows how much light it is getting. Additionally, multiple reaction-diffusion patterns are occurring on the surface. The properties of the chemical reactions are also evolved, and each polyp controls its chemical output.  During the course of development, this simple neural network is able to produce a complex morphology. Corals use the zooxanthellae living within them to turn sunlight into energy, they also catch zooplankton floating by. So by changing the relative contributions of light versus current, different forms emerge. It's also incredibly fun to let the simulations start running then wait to see what comes out. 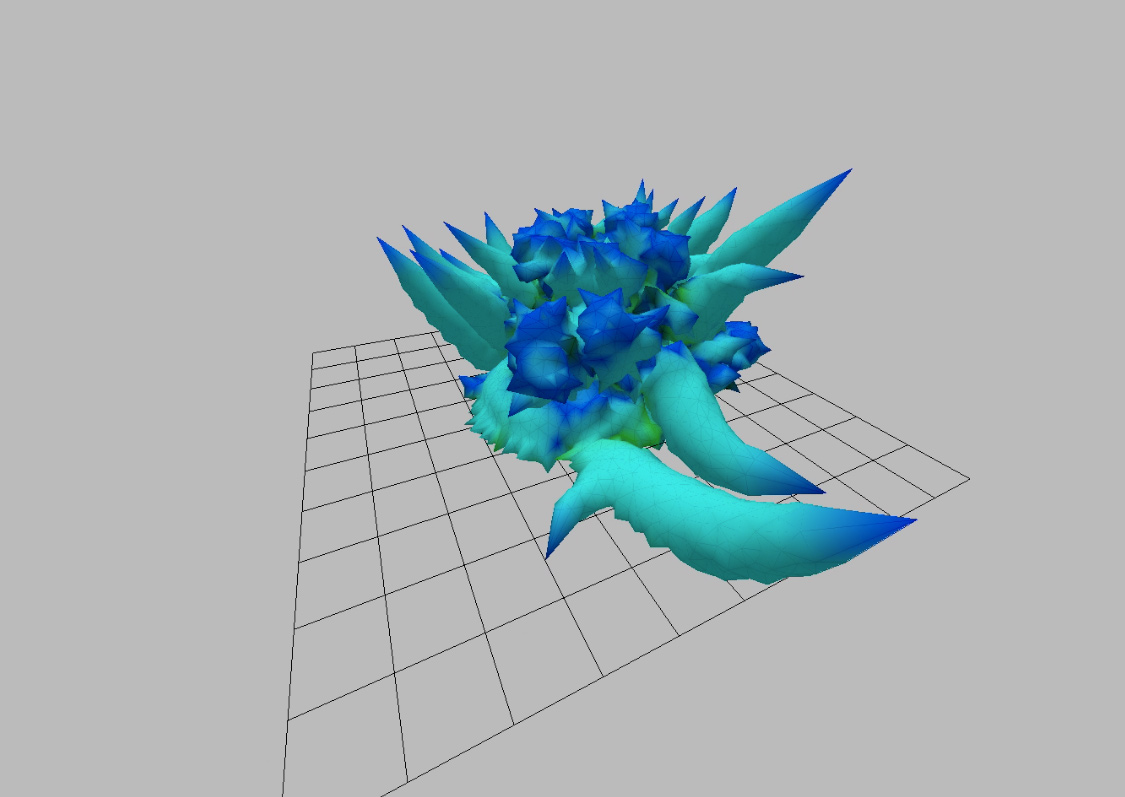 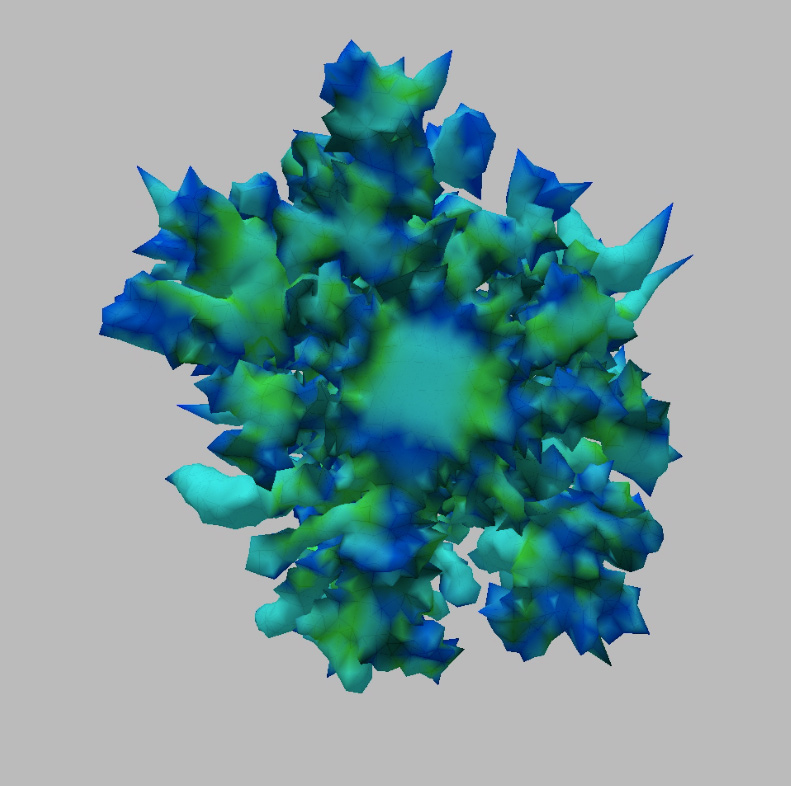 How does your plant and coral modeling interact with your ecology modeling? Are they separate or complementary?

They’re complementary, but they’re totally separate. One is, let’s look at an individual plant and make it as complicated as possible. The other is, let’s make the plant as simple as possible and make as many of them as possible. We look at the individual versus the collective.

So yes, the ecology modeling actually was inspired by the plant modeling, and then it kind of superseded it and pushed it off. Once you start modeling plants, you run into questions like, how do they compete with each other and how do they compete for resources, how will that affect their form. And then I kind of went down that rabbit hole.

The problem with modeling lots of plants together was the restriction of how many things you can model timewise. Because you’re doing a lot of detail on the form and morphology of the plants, it’s hard to model thousands of them. Modeling just a few of them is slow. But then I kind of realized, you don’t need this complex morphology to model their interactions, you can kind of do a really simplified version of it.

And then, that kind of got me into a lot of existing things. Are you familiar with Conway’s Game of Life? That was one of the early simulations. It's very simple. It’s on a grid, and there are different rules for deciding the state of each position. Each square is supposed to represent life, the next time step is dependent on the last one. Where the species were before will affect where they are in the future. There’s only a handful of rules. If an area gets too crowded, it affects one dying, and if something is near others but it has enough resources, it can have growth. Very simple, mechanic rules, and if you simulate over times, these wild emergent patterns form. And the diversity of patterns is very high, so it’s fascinating to study.

Since I’m familiar with the generative art stuff that’s going on now, and since I’m also now familiar with some simple ecology modeling, I wanted to do something kind of in the middle. I wanted to know if you apply the same kind of very simple rules then scale it up, what kind of interesting properties will arise. 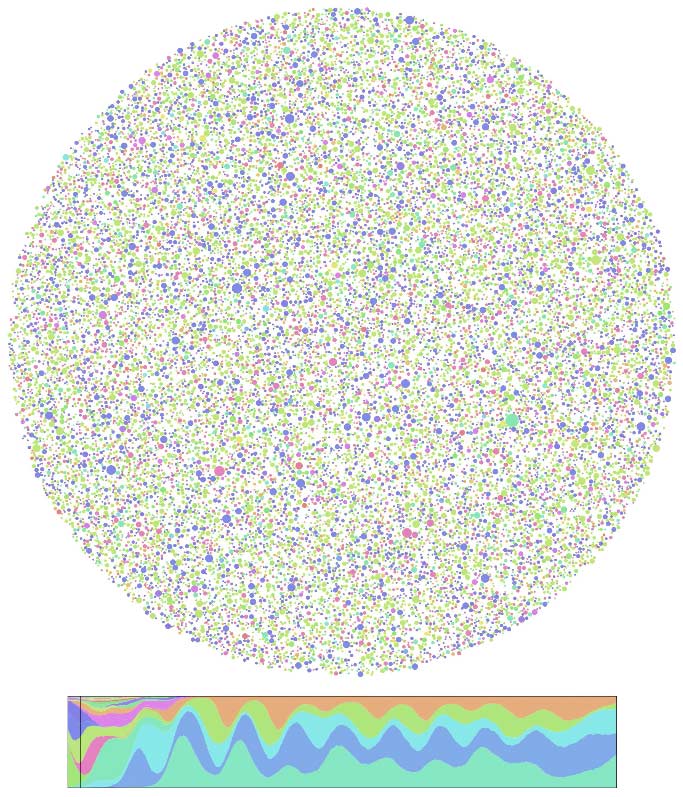 View of the simulation above, abundance plot for 50,000 generations

Do you envision a utility to what you are doing or is your project purely exploratory, for art’s sake?

My aspiration for this project is something that’s both. Something where it’s both art and also a useful experimental system--a visually appealing experimental system. Or not just appealing, but visually revealing, too, so you’ll understand the system better. There are a lot of different ways I’ve looked at it. Multi-agent modeling is useful in ecology, and models like this can be useful. I’m still working to figure out what kinds of things should I test with this system. I would like to talk to more ecologists because I don’t want it to just be visually useful.

But I think that in a lot of ways, my ecology modeling could be interesting as a different kind of generative art. I want it to be a valid modeling system that strengthens the legitimacy of what you’re looking at, even if it’s not used for any groundbreaking ecology modeling research. Obviously there are so many assumptions built into any model that it’s hard to know how useful it will be for actually testing different theories. But with my ecology model, I want to see what affects the amount of stable diversity, see what factors affect that, and understand the different attributes of a stable diverse ecology system. So, it’s interesting also as a generative art medium because I think a lot of times the medium--or the interface to the medium--affects how you work with it.

Visually, how did you approach your project? Did you come into this with a film perspective at all?

I definitely wanted to represent what’s going on well. What’s exciting about the ecology modeling is what made sense visually also made sense from a modeling perspective. So I’m attracted to things where it’s not a conflict between what’s interesting and what’s beautiful. I think it’s interesting, and it’s beautiful.

A lot of our perspective on beauty is grounded in nature. I think there’s a reason, in surveys of beauty, in landscapes, fertile landscapes with rivers and valleys are across cultures the most beautiful. And I think it’s kind of obvious that humans who are attracted to fertile landscapes did better, so there’s a very natural underpinning to our idea of beauty. What attracts me to projects like this is you kind of see how abstract that aesthetic is. Obviously forests that have huge diversities of flowers are considered more beautiful. We have all this diversity of ecology that’s living harmoniously. So what’s interesting to me is how abstract is that beauty. Is it the literal form of those trees and flowers that’s beautiful, or is it the idea that there’s so much diversity that comes together, and that the parameters of the world gave rise to that diversity.

The plants are kind of a complement of that, only with the plants that theory applies to one morphology. Is this complex spatial solution beautiful, what are the properties that make complex spatial forms that are solutions to problems beautiful. Because a tree is beautiful, right? Because it has a sense of balance, it has a feeling of movement, it looks stable. But also it’s a very complex solution. You have to design a form that can collect water, that can be strong, that can collect light. The movement of branches is what I think is most beautiful. But do we find those forms beautiful, or do we find complex emergent spatial patterns of that class beautiful?

How did your opinions of beauty influence the development of your design interface/medium?

Well, what I like about the ecology modeling is I could have made a pretty circle generator where the algorithm could have been: what are the ratios of the colors. It could have just been done that way. There’s a lot of generative art where it’s just a model for creating beautiful pattern and you can tweak the parameters and you can get a different beautiful pattern depending on how you tweak them. But I wanted something where that complex system had more depth to it. What I’m attracted to is the idea of a lot of the depth people take in diving deep into certain design frameworks.

Since people don’t know how a lot of these things interact, we have to understand ecology modeling to understand how to interact with the system. Instead of being like, what’s more beautiful, the ability to design a system that answers that question for you well makes for a more beautiful result. Like my example is, how can I make sure this will produce stable some-number-species pattern? Or let’s say, my artwork is, I want five species to oscillate off-phase together. And then you can produce that. When you do, you know the pattern may be beautiful, but it’s more beautiful if you know, okay, this is not arbitrary circles plotted, but it’s actually five distinct species that compete but have somehow formed equilibrium. And knowing that’s what’s going on underneath, and knowing that’s something no one had direct control over but they knew how to set it up in the right way--the art medium has then become designing the ecology world, and that’s a much more interesting and beautiful design interface. Then by interacting with it in that way as a design tool you may actually uncover new things about abstract relationships in ecology.

Check out more of Joel's work at: www.joelsimon.net