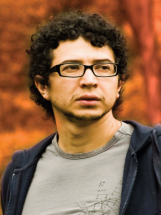 Born in Quito, Ecuador. Pável Quevedo studied film in Argentina, where he specialized in directing. He studied music and piano in Quito. His first film, La Tola Box, will soon be premiered in movie theatres nationwide. He is also developing his first feature film, Samson, and his second feature documentary, Danzante del Destino, now in the post-production stage. He has directed several short films and received film and poetry awards. He wants to develop a visual language that represents his own narrative and aesthetic concerns and which embodies his cultural and social context.