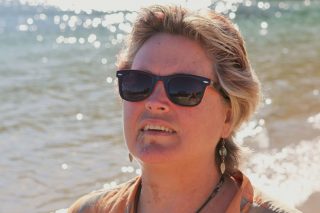 Lea Kannar-Lichtenberger is an artist who explores the connections that surround human impact on islands and isolated environments. Her degrees in fine arts an MSA (Master of Studio Art) and MFA (Master of Fine Art) University of Sydney (Sydney College of the Arts) coincided with her 2 residences at SVA Nature and Technology Laboratory, both of these were pivotal to Lea’s current art practice.    Since 2014 Lea's investigations include the Galapagos Islands (Ecuador 2014), Faroe Islands (North Sea 2016) Lord Howe Island (NSW 2015 ongoing), Venice (Italy 2017) & Deception Island (Antarctica 2017). Examining through immersive residencies as artist/tourist, traveller, observer, with Lea’s interdisciplinary vision embraces mediums including print-media, photography, drawing, new media, video, sound & installations, she looks beyond the travel guide rhetoric to create artworks and installations that examine the impact of the Anthropocene and consumerism on the Utopian destination.   Among Lea’s career highlights include; her 2021 lecture at the Royal Society of NSW titled ‘Antarctica, This Ain’t No Mirage: - the value of art in disseminating scientific information’; publication of a chapter in the recently released book, 'Using the Visual and Performing Arts to Encourage Pro-Environmental Behaviour'; along with her moving video work Gagged, opening the 2016 Jane Goodall Symposium in Brussels by Associate Professor Monica Gagliano as part of her keynote address.   Lea Kannar-Lichtenberger’s research, writings and resulting artworks have been published in peer reviewed journals and a book, she has been invited to deliver formal lectures and over 20 papers at conferences around the globe, whilst exhibiting her research in solo and invitational exhibitions throughout Australia and invited exhibitions globally.