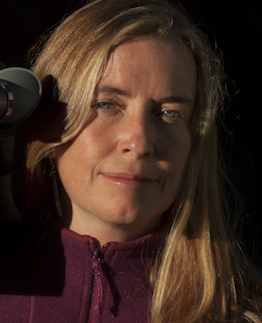 Kathy Kasic is a documentary filmmaker and an assistant professor at California State University in Sacramento. Kathy began her career as an evolutionary biologist in the Ecuadorian Amazon recording noturnal frog calls--until the day she picked up an infrared camera. For the last 16 years since then, she has been a director and cinematographer of science and natural history films. Her work has screened at international festivals and museums and broadcast on television, including BBC, Discovery, Smithsonian, PBS and National Geographic. Before CSUS, she taught for 6 years at Montana State University in the Science and Natural History Filmmaking graduate program, where she founded MSU’s Center for the Communication of Science. Kathy is the Director of The Lake at the Bottom of the World, a film about an NSF-funded exploration of an Antarctic subglacial lake 1100 meters beneath the ice in the search for life and climate secrets.

The Lake at the Bottom of the World