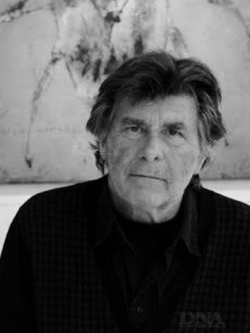 Lizards and shells, snails and molluscs – in the picture world of Alexis Gorodine we discover organisms, which – quasi off the evolution – since primeval times remain apparently on the same level of development. Accordingly these creatures are also in the paintings in a strange state of suspension, one moment before petrifying. In their significantly reduced shapes they look almost like fossils, traces of former organisms, on the mineral surface of the canvas. Here we find a special preference of Gorodine, which has its cause in eternal outlasting of these early life forms. And then humans step into the scenario: Early cave designs come to mind, when a bull head appears only in his outlines on the earth like surface. In the same context the emerging characters are to be seen, cryptograms of a past advanced culture. It is always the beginnings, which interest Gorodine, the beginning of organic life, just as the beginning of human culture. At the same time his pictures are highly modern, because in the combination of old and new, of figuration and abstraction one discovers fresh novelty: on one hand the pictures seem to be very known for us, they affect a preconscious condition of our consciousness. On the other, the creatures appear often, as if they where coming from our machine world. So in “Glory of the sea” a shellfish can become an imaginary submarine. In addition the pictures with their porous and scratched surfaces remind us of the French Decollagistes and of big-city wall graffitties. The strength of the pictures of Alexis Gorodine lies in this masterful linkage of the disparate. His pictures radiate archaic peace, they contain the original strength of life. The viewer is invited to set free and win for himself this strength.