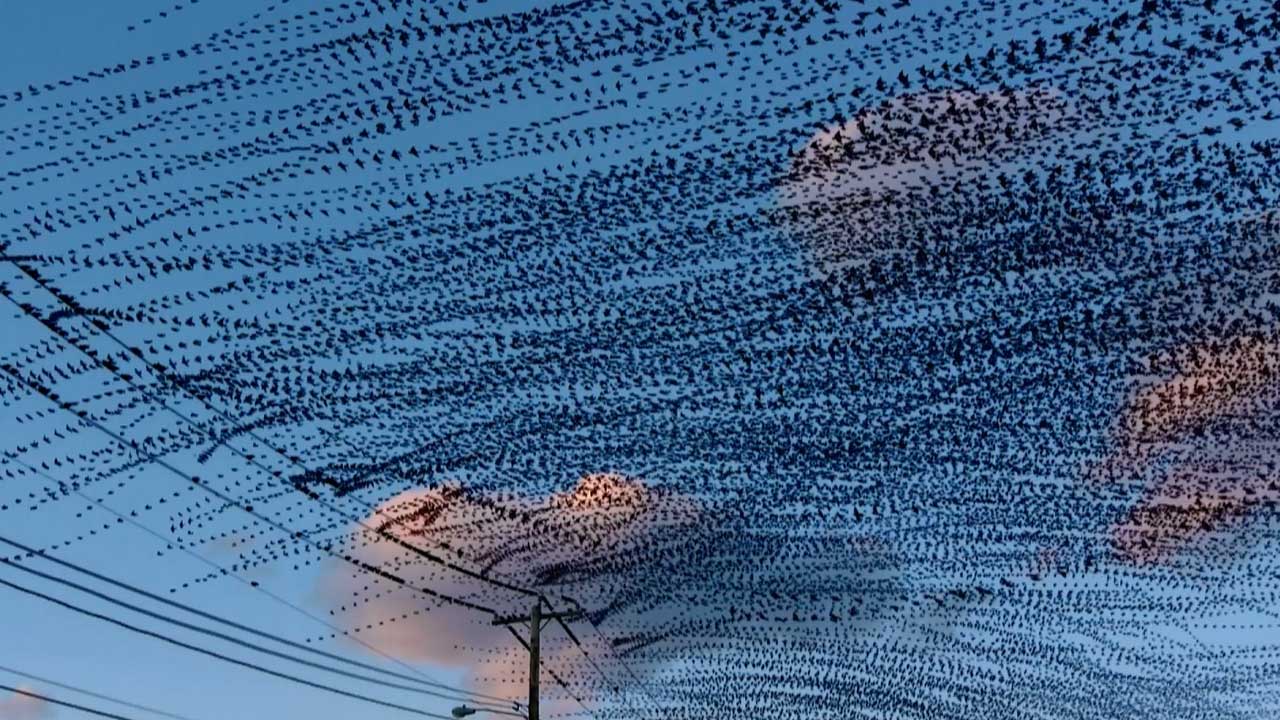 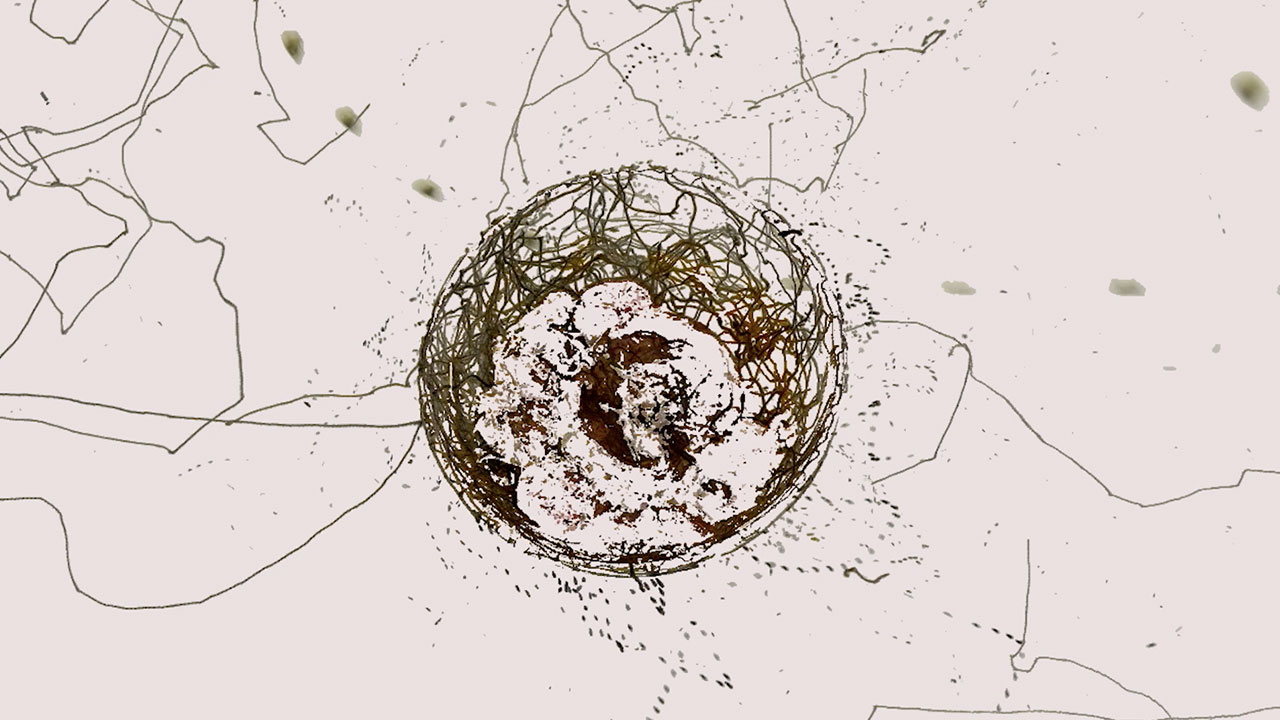 Fruit flies draw a bowl of ripe fruit from above 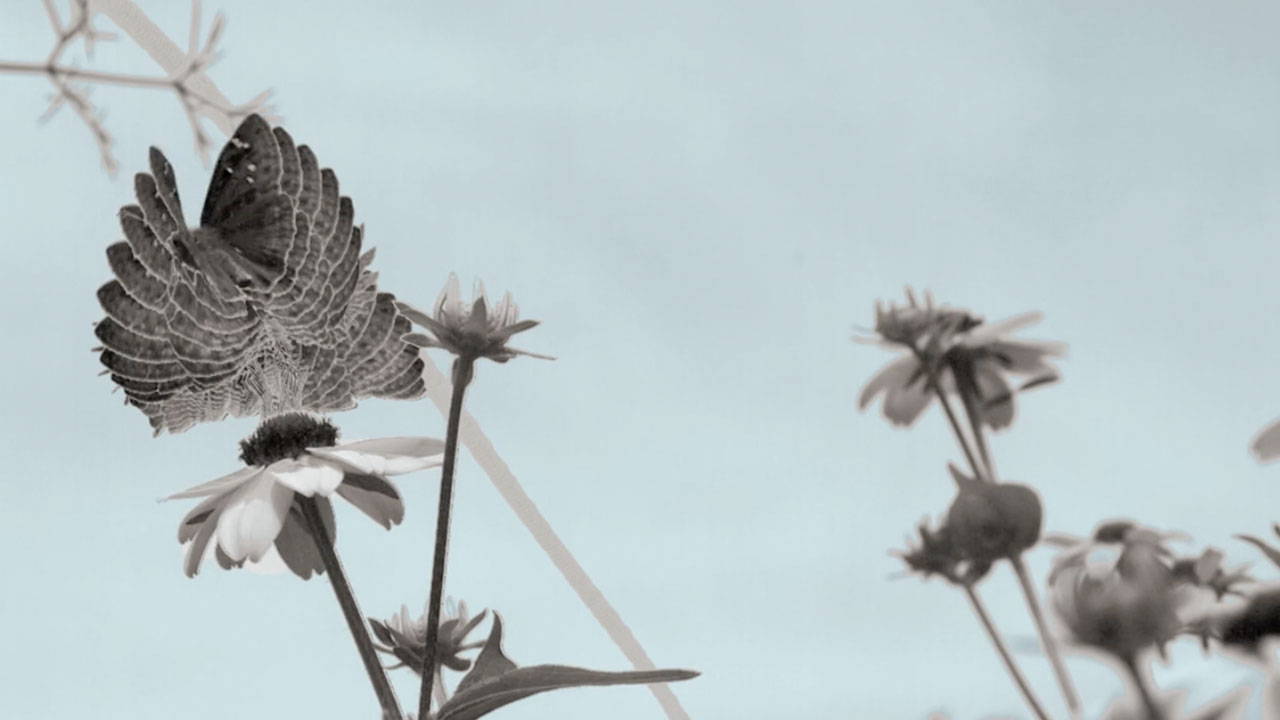 Flight of a Small Northern Cloudyspot 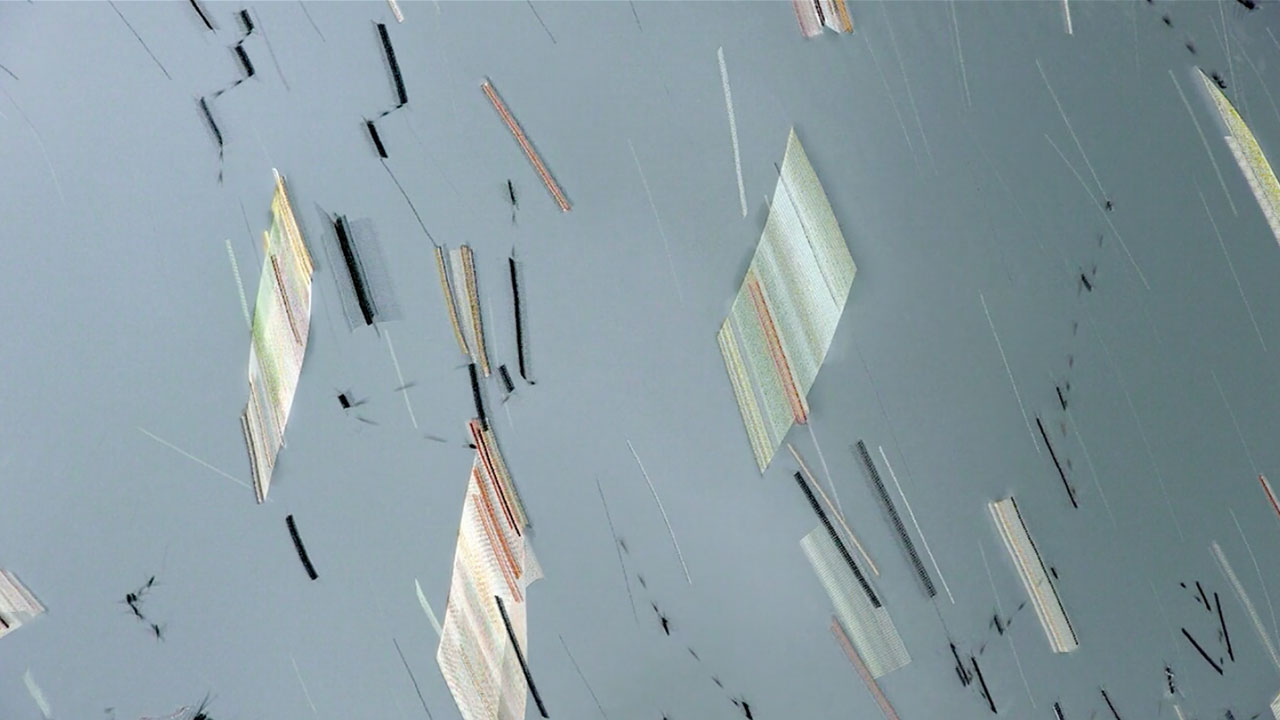 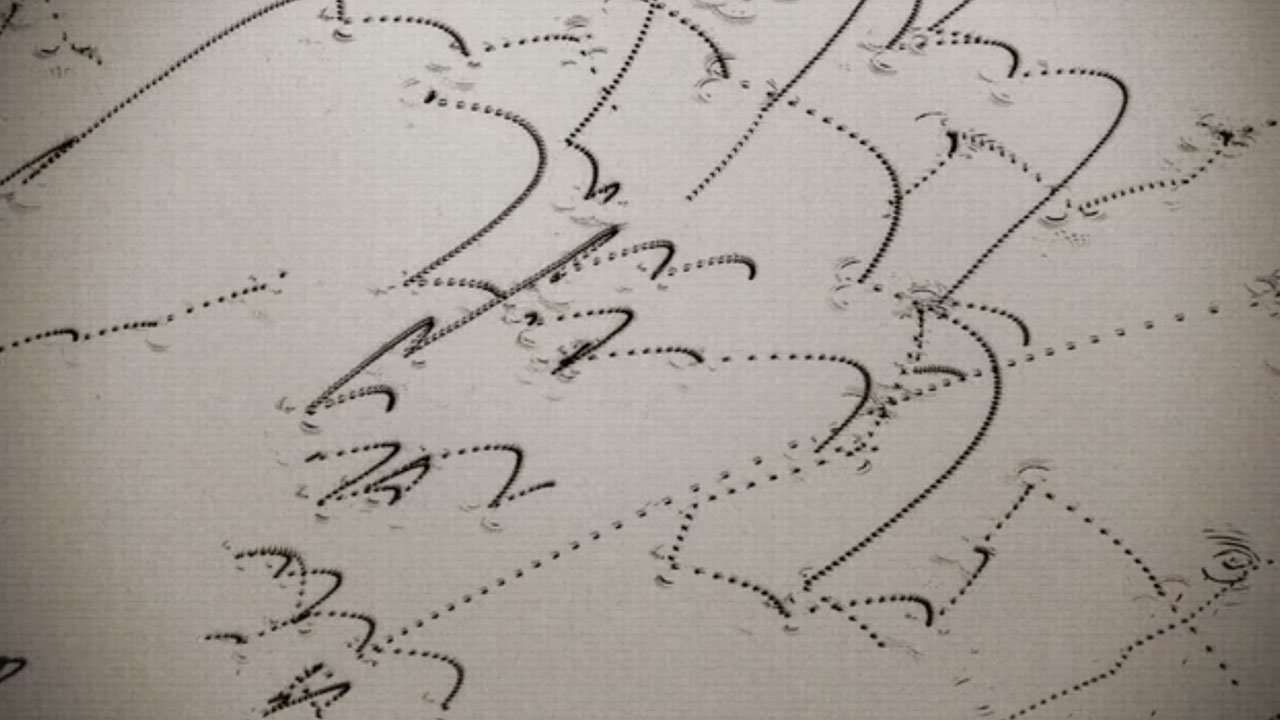 Dennis Hlynsky (1952 Ohio) resides in Providence, Rhode Island where he is a professor and the Chair of the RISD Film/Animation/Video Department. He is a practicing artist and an early adopter of electronic media. Drawing and photography were primary studies but soon gave way to video in 1972. The US bicentennial began his study of celebration as a long form time art.  This in turn led to the study of small animals gathered en masse as annual events.

Dennis incorporated ever evolving electronic media technologies into his artistic practice. The early experimental video mode incorporating analog image synthesis was replaced with a decade of documentary. Between the years of 1977 to 1987 Dennis recorded people with life threatening illness. The Videoanalysis project at RI Hospital with Stephanie Lafarge produced video recordings used to inform medical professionals as well as give voice to terminal patients on the international stage. This work underscored the notion of artists as observational human beings and encouraged an appreciation of the smaller events in our life.

Digital technologies provided a refreshing outlet for continuation of the early experiments with analog video synthesis. Currently, his love of the electronic temporal plastic image has continued as well as periodic off grid community celebrations.

Tell us about the 5 featured films on Labocine?

The five featured films are an excerpted from a much longer photographic study of small animals moving in a group.

I began photographing when I was a teenager. My family lived near a thousand-acre wooded area and I spent many hot summer days with little to do. I would walk in the woods, pick black berries, build forts, and observe the seasonal changes. The Devil's playground is idleness not boredom. Having an active mind with time to think was a treasure of my childhood. Boredom builds observation skills and by the time I went to art school I had formed a habit of carrying a camera and photographing anything that I thought was remotely unusual. I was an early adopter of video (1972) and have stuck with the technology through all the many changes.

I started carrying a pocket video recorder right around the debut of YouTube and Vimeo. I believe advances in lens based recording have given us new ways to experience the world around us. The most recent sea change has been pocket sized video cameras, extension of dynamic range, and the ability to stream video. The early learned habit of recording the mundane extended to pocket cameras. On one October day, I had opportunity to stop and record a flock of starlings. I am an avid fan of image processing and like to "play" with clips I record. I discovered video frame stacking. flight of a small brown moth

Multiple exposure photography is not a new idea. Researcher photographers like Muybridge, Harold Edgerton, Gjon Mili, Marey, and all focused their work on pattern and movement. Photographers like Margaret Bourke-White and artists like Duchamp (Nude Descending a Staircase) have similar mindfulness. While movement and pattern is the overarching idea mybody of work is directed at visualizing the complex paths small animals take when moving as a group. Proper nouns like murder of crows, den of snakes, and a business of flies signify an aspect of the group distinct from the creature alone. I quickly realized that all data is dynamic and static positional arrays were not so useful

As the work progressed a series of questions emerged. Are the paths made instinctual or learned? Are the arching flight lines of starlings causes by a lack of stereo vision? Are fruit flies drunk? These questions continue to motivate me to find new sites to photograph.

The discovery of frame stacking the video of the starling flock opened a new world of observing. I had seen a many still photographs taken of golfers swinging in a strobe light but I had never see the technique in motion.

Can you describe the technique use to trace the movement/patterns of birds?

After many tries to name the technique I have settled on "frame stacking." The main technique is contrast dependent. There must be brightness or color difference between what is moving and what is not. The dynamic elements are not slowed down but rather held on screen for a longer time. I use After Effects as a compositor. A few seconds of frames are stacked in layers and combined using a darken or lighten blending mode. This results in the lingering of any moving object in the frames. Objects not moving in the frame get the same treatment but since they don't move the only effect is to minimize noise. Needless to say, the camera is locked down on a heavy-duty tripod. I've used many different cameras. Currently I am using a Blackmagic pocket cinema camera. Other favorite cameras include the Lumix G series and the Edgertronic high speed camera.

Below is a diagram of the technique. It depicts one second of ants walking across a white surface. The white was made transparent. Click the link to see the video. Illustration of an XYT block where T= sequence of image samples

Apart from the aesthetics, what is the purpose of tracing animal movement? Is there a scientific value to this study in motion?

I see myself as an artist who creates films that appeal to scientists. Like many artists, I use a methodological approach combined with a documentary sensibility of non-interference. I see these video works as real-time lens-based recordings. They are augmented by ordinary digital processing. I tend not to use time-lapse. This is a technique of removing frames to speed up movement. With the exception of fruit flies draw a bowl my tendency is to use a higher frame rate.

I began posting my films to Vimeo and was quickly conversing with a group of scientists, social biologists and physicists who had been focused on modeling this same behavior. Due to the quantity of data and data occlusion an accurate model of micro-currents inside a fast-moving swarm is difficult. I started reading scientific papers on flocking. The undercurrent in most of the scientific papers pointed toward instinct. Certain animals were simply born with the ability to flock. Brain size to body mass has been the assumed measure of intelligence. Small brains precluded any sort of awareness. The subtext of these papers suggested animals were amazing biological robots. On the other hand, many birdwatchers and social biologists voiced the opposite opinion. Generalizing group behavior from a single specimen was a basic error. They promoted the idea of seeing each individual creature with a distinct personality and set of skills. Data describes a range of possibilities rather than a singular instinctual pattern. Two crows and their shadows land in front of a cinderblock wall.

Labocine encourages all forms of science videos - from raw footage directly in labs to doc to fiction. How would you define "science filmmaking" in your work?

I have always been attracted to certain artists I call "research photographers." Science and the Arts have a long history of hand holding. The precursor to all scientific discovery is the fact homo sapiens are extraordinary at observing the world around them and making sense of it. Speculation is a fantastic skill. It is unfortunate that the sense we have made of pure observation was often is in error. We mistook a creepy feeling in a graveyard for the presence of ghosts. The dependence on feeling rather than fact created flat worlds and egocentric views of the universe. In its most basic form I believe the practice of doing science is designed to create dependable knowledge. The traditional quest for reliable information dismisses the questioning practice of art making, of filmmaking, and drawing. I have great respect for Labocine because it strives to reconnect science with observation.

I am creating camera rigs in my studio that float just under the surface of water. One is held afloat with duck decoys. Another encases the camera in a floating transparent container. The rig points the camera toward the surface. I also, have access to an electron microscope with a video-tap.

Often scientific practice begins with concrete questions. Art making often starts with a mess or becoming a resident in a community. More abstractly artists become resident in an idea. It has been a tumultuous political year. As a professor, my students have been stressed and that means I have been stressed. I expect the "Upper Pond" project will make me sit on the shoreline waiting for something to happen. I look forward to the boredom needed to inhabit those top sixteen inches of water.