Border landscapes: The River is a Seam 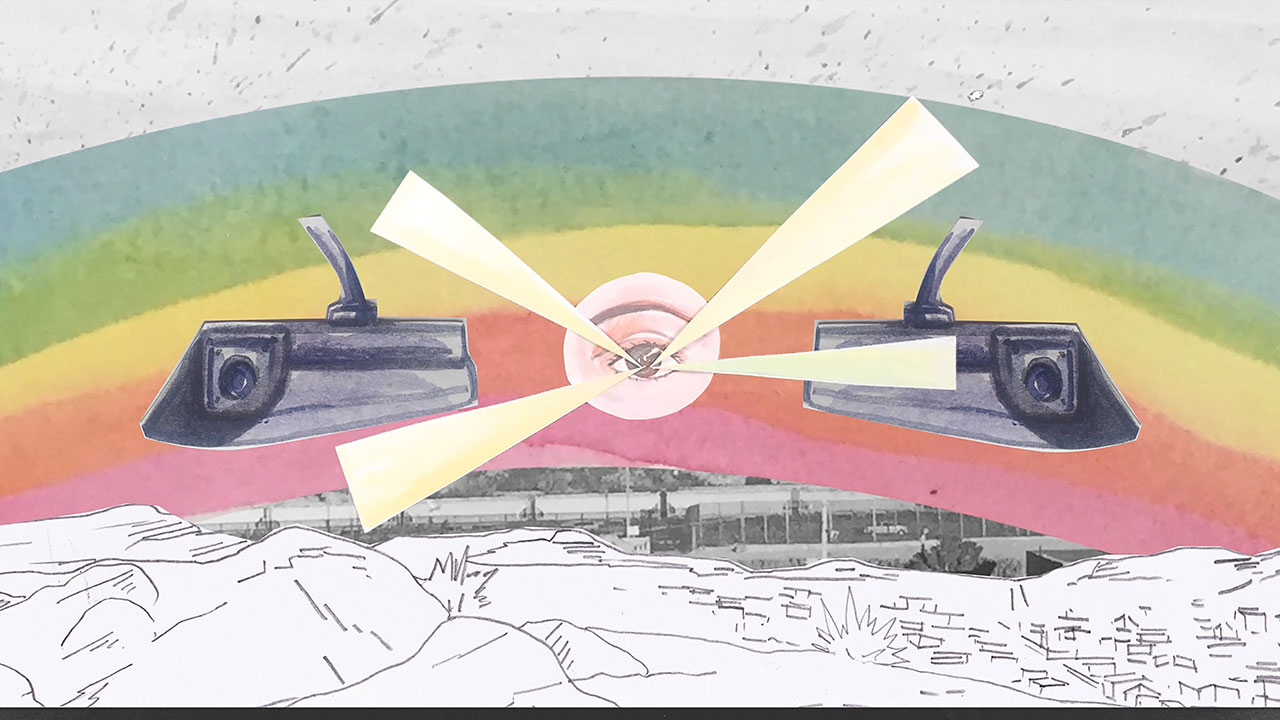 Some background on Selections from Fred’s Rainbow Bar

And Other Stages On The International Border

Wrinkles are memory; Time is a cloth

I heard this adage once, but I can never seem to remember the source. These words, in this order, conjure for me the border landscape in which I grew up. Where the river, or the rio or the río as I was first introduced to it or her, represented a perforation or a cleave that could hold two places – the U.S. and Mexico – at once.

The stitches of this meandering river, in a pre-colonial time, once held these two places firmly together so firmly, in fact, that they once shared the same name. In 1848, The Treaty of Guadalupe Hidalgo first drew a line down the center of the river. For the next forty years, the river would challenge this demarcation even as lines were drawn and border markers were placed along the line like basting pins holding two pieces of fabric together. After a historic flood in 1864, the Rio Grande/Río Bravo, in her last attempt at wildness, would swap a portion of one country with the other. Later the Chamizal Convention of 1963 would return 200 acres of Cordova Island to Mexico and channelize a portion of the river, forcing both countries to come face to face with each other and the reality of a shared watershed. This always seems to me one of the more hopeful moments in recent borderland history. 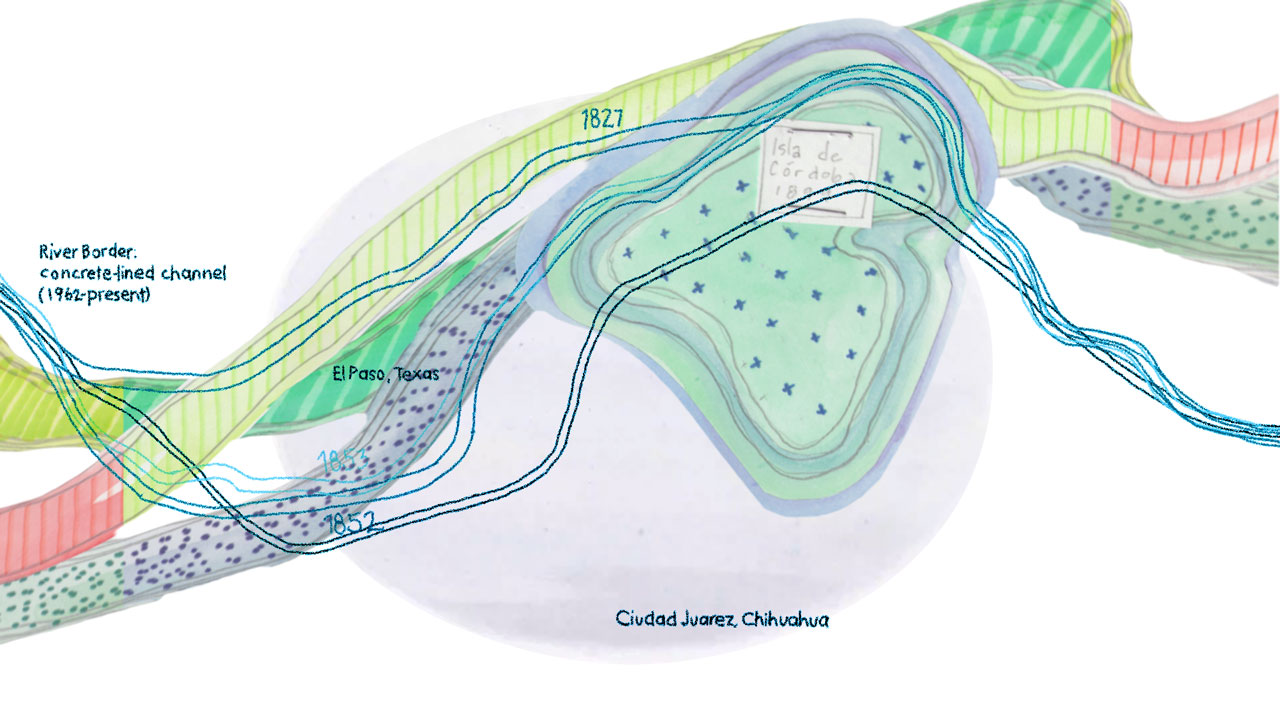 A 700-mile wall was constructed in 2006, a rent in the fabric compromising the entire cloth. It is hard now to imagine the Fronterizx of the past two centuries who, much like the river itself, carefully wove together the fibers of the cloth on either side of the seam. I’m thinking of Pancho Villa, the Robin Hood General of the Mexican Revolution, who frequently traversed the border often taking refuge in El Paso. And 17 year-old Carmelita Torres, who, in 1917, initiated a protest on the Santa Fe International Bridge, ending the inhumane US customs practice of delousing Mexicans on their way to work. And Jack Johnson who, like many black Americans found allies in the fight against white imperialism in Juárez joining the Mexican Revolution. In the film, I talk with friends who I also consider weavers of the cloth. For instance, in Part 1, I interview conceptual artist Carlos Gutierrez, a friend from college, who in 1995 produced a social sculpture/painting that could only be seen from the vantage of El Paso. 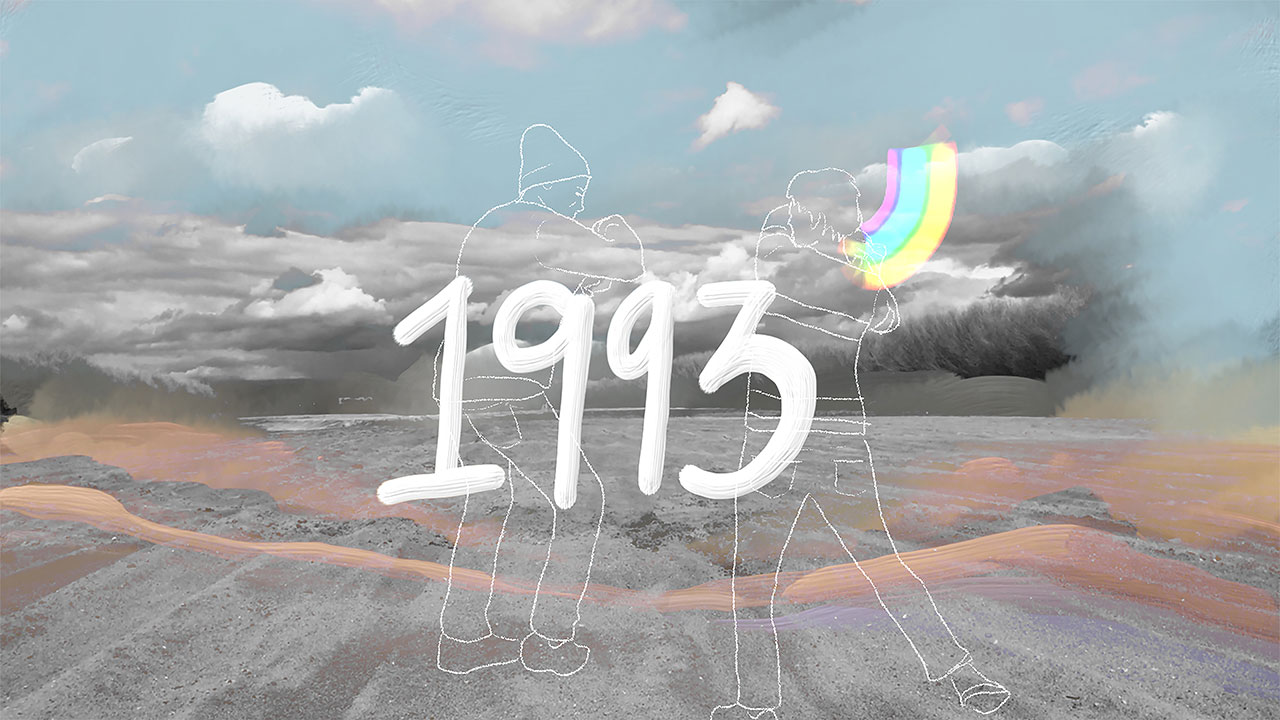 Embrace the center of the river

On my first visit back to El Paso, after having moved to New York, my friend Hazael and I met in the special collections library at The University of Texas at El Paso. (I am a UTEP alumni and I returned to teach sculpture there shortly after Graduate school in 2001, just as border security began to fortify the line.) The University overlooks the river and the Anapra neighborhood in Juárez. Hazael, and I searched for meander maps of the Rio Grande/Río Bravo. I was hoping to find maps similar to the illustrations Harold Fisk designed of The Alluvial Valley of the Lower Mississippi River for the Army Corps of Engineers. Hazael tells me that rivers always meander at the same rate; always 1/3 the length of the river. We didn’t find the maps, but I thought about the agency of wild meandering rivers for the rest of the day.

The Language of the Mountains

I grew up on the International Border, a place where every mountain contains its own sign system. Like large hands, these mountains appear to hold together two cities pulled apart by treaties and walls and by politicking and policing and tell a complex story of both its origins and its aspirations in the face of so many struggles. In 2015 I received a Jerome Foundation Grant to make a partially animated film about growing up in this region and the ways in which Fronterizx have navigated the border landscape. In doing my research and working and reworking the structure of the film, the language of the mountains has emerged as an important text in my bibliography for the film.

My high school was either named for Francisco Vázquez de Coronado, the Spanish conquistador, or the highest peak on the Franklin Mountain Range. The high peaks are each named for the Conquistadors while the lesser peaks are named for either Texas military leaders or local high schools.  Our mascot was the T-Bird, or the Thunderbird, nicknamed for the red-iron oxide rock forming the unmistakable silhouette of the mythical Thunderbird. With slight variations, the legend of the Thunderbird is prevalent in the Yaqui, Hoh, Quileute, Sioux, Pima and numerous other Native tribes in both the United States and Mexico.

Coronado high school, located on the Westside of El Paso, was nestled in the Franklin Mountains marking the easternmost part of the basin and range province. The mountains serve both as a scenic backdrop and an illuminated manuscript to be read in different ways depending on where you were and what your fluency was with these regional signs. 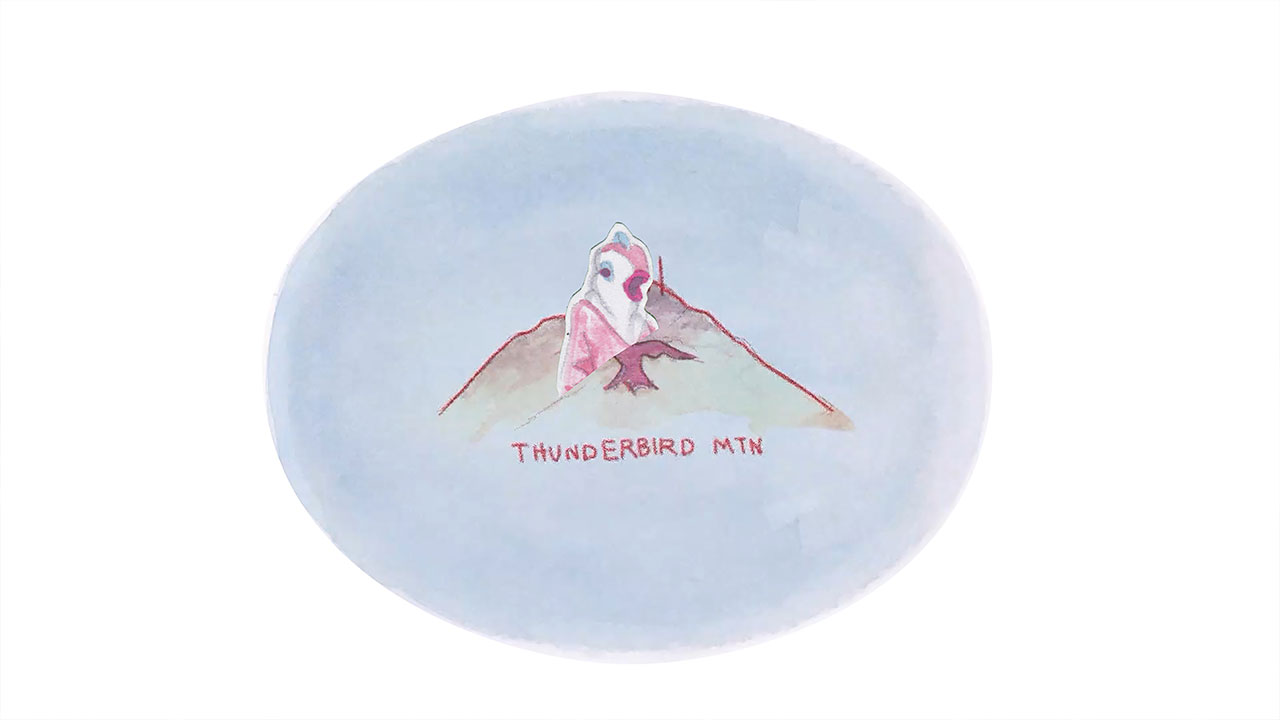 In 1987, the Cerro Bola mountains in Juárez were inscribed with the following command: “La biblia es la verdad. Leela." (The bible is the truth. Read it.) The evangelical pastor Gerardo Bermudez had the idea after attending a meeting of ministers who wanted to show the unity of evangelical Christians in Juarez. Then, in 2014, a bi-national group named Luz del Mundo added the words “50 años apostolado S.J.F.” (or, “50th year Samuel Joaquin Flores”) to honor the leader of the Guadalajaran ministry. Juarenses were angry about this second inscription, because the group failed to obtain a permit before painting the words on the mountain. And though some El Pasoans were also angry because of the environmental impact to flora and fauna, they couldn’t really complain without acknowledging the markings on the mountains in their city. 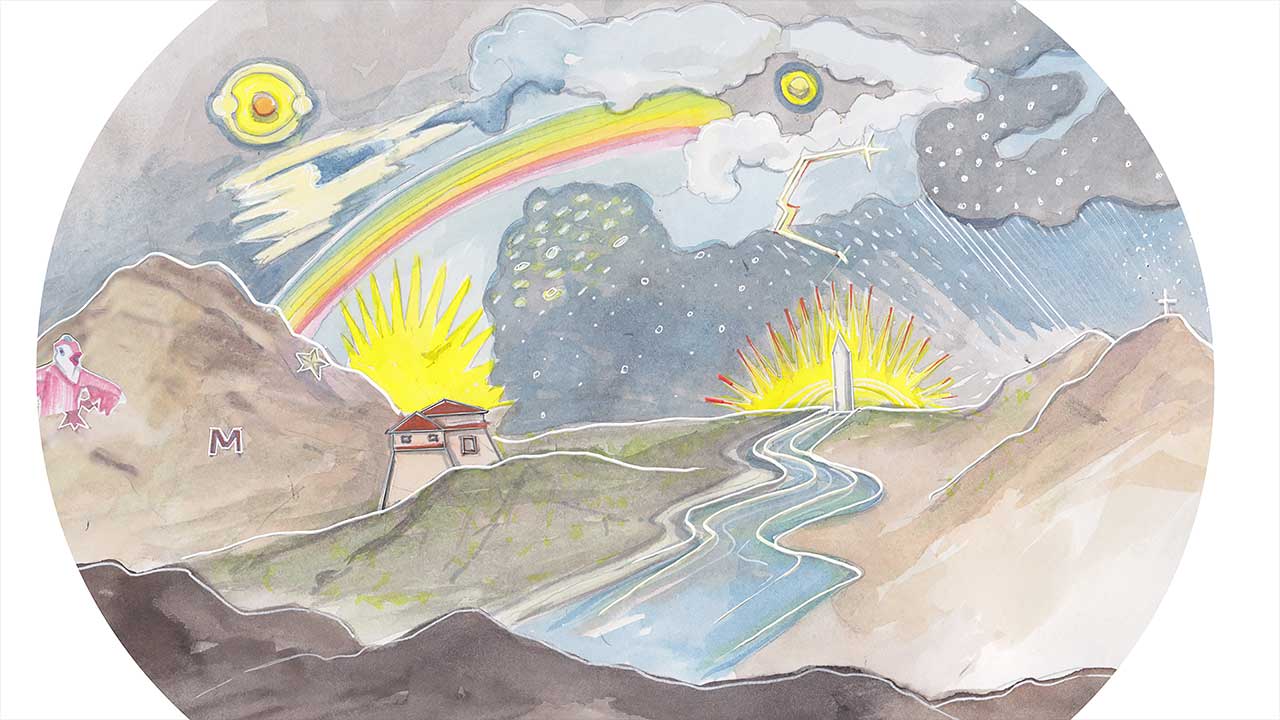 In the late 1990s, a half-mile-long white horse, based on the three-thousand-year-old Uffington horse in Great Britain, was painted on the Sierra de Juárez by local architect Hector García Acosta and his son, Carlos. It was not well known that Amado Carrillo, head of the Juárez cartel during this period, commissioned the enormous geoglyph. And mysteries continue to surround the significance of the horse in both places. 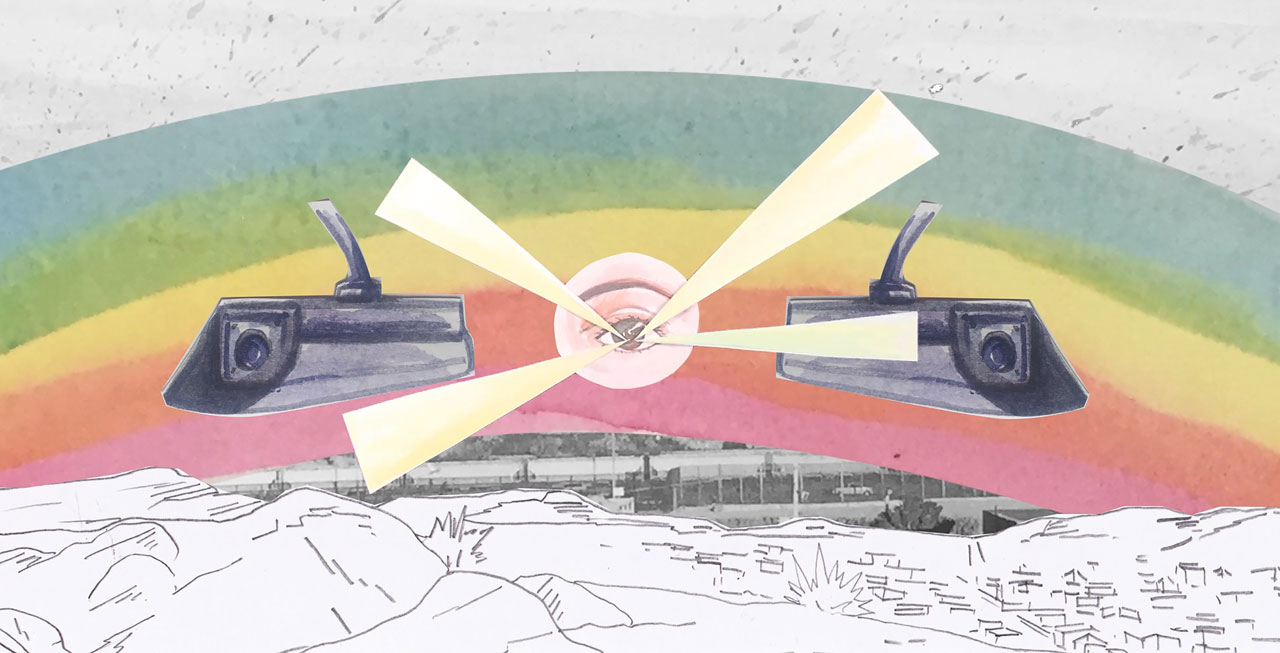 How we see ourselves across the river

Nicole Antebi works in non-fiction animation, motion graphics, installation while simultaneously connecting and creating opportunities for other artists through larger curatorial and editorial projects such as Water, CA (a six year collaboration with Enid Ryce) and Winter Shack (a three year collaboration with Alex Branch). She has taught film/media courses at CUNY Staten Island, Parsons The New School, and Cal State Monterey Bay. She frequently collaborates with UNY, l’ao , and most recently with electronic music pioneer, Vince Clarke. She also co-produced the five part web series Just Browsing, written by Joanne Mcneil. And was a 2015 recipient of a Jerome Foundation film/media grant for a forthcoming film about the border landscapes of El Paso and Juárez.

My interest in the movement, history and mythology of Water in the West probably originated with my upbringing in El Paso, Texas.  Before I knew the history of the 1963 Chamizal Convention which would ultimately channelize and permanently fix a portion of the Río Grande/Río Bravo as the official border between United States and Mexico and before I knew that rivers change course and therefore make terrible boundaries, I was aware, from a young age, that the fluctuating water levels of the Rio Grande, largely determined the movement and prosperity of people on both sides of the river. The river bisected these two places, but the shared watershed also brought people together.  In 1999 I moved away to attend grad school in California but would periodically return to El Paso. On one trip I was struck to find that the river was no longer visible, obstructed in part by the US/Mexico border security fence. This got me thinking about the importance of visibility, engagement and access to one’s watershed.

[1] According to historian David Dorado Romo, the term originated “During the Mexican Revolution. There were mutual aid societies with the term Fronterizo as part of their association’s name. The first documented use I’ve come across was 1870. There was a bilingual newspaper out of Las Cruces called El Fronterizo/The Borderer.”

[4] Reference to the caballo in Charles Bowden’s 2010 book, Murder City.