As Above, So Below

A group of people roams in a bare landscape around a set of swings as their only settlement, as if mapping, exploring, reorganizing the open territory they are in. As they move, changes in soundscapes make them virtually cross geographies. In the sky, a moon-like satellite roves above their heads, following them like an omen. The moon, once symbolizing cyclical times, myths and new beginnings, is now the satellite waiting to be conquered and colonized. Reality and fantasy intertwine in an existential quest. Is a new beginning really possible? As below, so above. 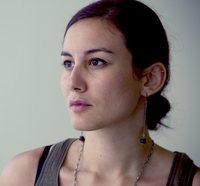