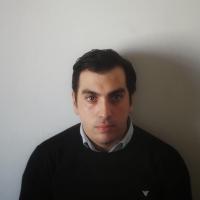 He founded and frequently collaborates with Spam.Church, an artist collective launched in 2017 at the Massachusetts Institute of Technology. The collective’s charter is to illuminate the many ways spam mediates our social world through design and installations.

Dr. Balsa-Barreiro has recently led a plethora of projects: from ones documenting reality destruction phenomena (Think:Act; Little Atoms; Los Angeles Times; El País), to the concept of Metamodernity (Telos; Los Angeles Times; Forbes), to the subsequent concept of Antimodernity (DAMN Magazine). His work has been published in art magazines (PHROOM Magazine) and has been invited to present in international exhibitions such the Central Academy of Fine Arts in China (2020), the Caltech Art Contest in the US (2020), Arco Spam in Spain (2019 and 2020), and Labocine Scenes (2020).

His day job is scientific analysis and mentoring of junior scientists. He had lived in Stuttgart, Zürich, Boston, Los Angeles, and Abu Dhabi where had served at ETH Zürich, NASA Jet Propulsion Laboratory (+Caltech), MIT Media Lab and CITIES NYU, among others.