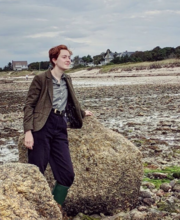 Anna Christensen is a PhD student in Harvard’s History of Science Department. Her research focuses on the intersection between natural history and colonialism in the Americas, as well as human interactions with the natural world. She is particularly interested in indigenous and settler forms of engagement with the distant past. Her current work deals with the relationship between animal species and human constructions of temporality, as well as how we understand animals that lie at the boundaries of biological reality. Particular environmental spaces that evoke the distant past, such as caves and the ocean, are of special interest. Her BA thesis at the University of Chicago focused on interactions between paleontologists and Native people on America’s western frontier during the late nineteenth century.