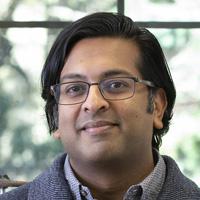 Siddharth Ramakrishnan, PhD., a Neuroscientist, is an Assistant Professor of Biology and the Jennie M. Caruthers Chair in Neuroscience at the University of Puget Sound. His research interests span the field of developmental biology, neuroendocrinology and sensory-motor integration. He is a recent recipient of the NSF CAREER award for early career scientists to explore modulation of the reproductive axis in the brain by endocrine disruptors. As a research scientist at Columbia University, he designed microchips to record from brain cells and used proteins to create bio-batteries and biosensors. As a postdoctoral researcher at UCLA (2006-2009) he studied the development and physiology of reproductive neurons in the zebrafish brain. His previous research addressed pattern-generating networks in snails and how they were modulated to elicit various behaviors.

Ramakrishnan was awarded his Ph.D. in neuroscience and a Master of Science degree in computer sciences from University of Illinois at Chicago. Prior to that he received a bachelor’s degree in computer sciences from the Biria Institute of Technology and Science in Pilani, India. Ramakrishnan’s expertise spans electrophysiology, small animal models, neural cultures, bio-electronic devices, and cellular membranes. His teaching has included basic biology; cellular neuroscience laboratory; the neural foundations of animal behavior; neuroendocrinology; and the intersection of art, science, and technology. A Fellow of the UCLA Art/Sci center, his collaborations with artists have led to exhibitions and documentaries that blend the worlds of art and science highlighting topics like Hox genes, animal umwelts and biomimicry. Recent exhibits have been at the Microwave New Media festival (2011) and at Art Environment Action at the New School of Design (2012). He is developing an Art+Science collective in his current position.

The Jennie M. Caruthers Chair in Neuroscience is a new position at Puget Sound created to broaden expertise in the high-demand interdisciplinary emphasis in neuroscience that has been offered to students since fall 2007. The new chair also will help students and faculty take full advantage of the state-of-the-art equipment and facilities now a part of the William T. and Gail T. Weyerhaeuser Center for Health Sciences.

Eugene Lang College for Liberal Arts at the New School